Australia Is Proof a Zero COVID Is a Catastrophic Fantasy 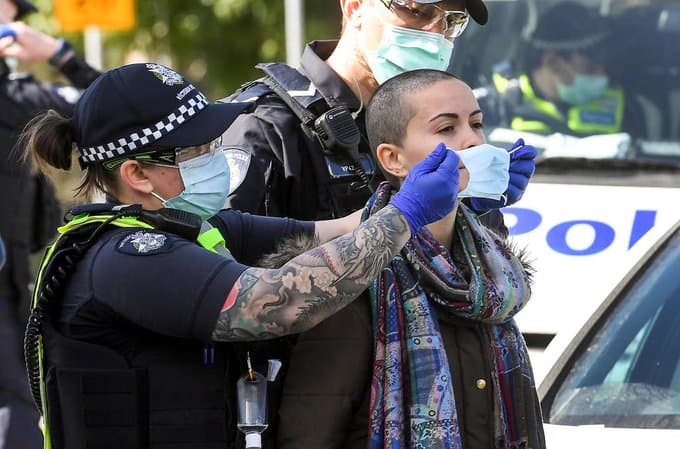 Two months ago, I was in the idyllic beachside resort of Byron Bay in Eastern Australia, enjoying a Greek-themed 50th birthday party for 100 people.

While people in London and Liverpool huddled together in groups no bigger than six, trying to avoid the pouring rain, I was enjoying shared platters of grilled lamb, a cocktail van, singing, speeches and dancing long into the night.

Conversation briefly settled on which celebrities were in town – Natalie Portman, Zac Efron, Matt Damon and Liam Neeson had all been recent visitors – but talk soon moved to Covid-19.

And the consensus was this: thanks to our ‘Zero Covid’ approach to the virus – a ruthless determination to isolate ourselves, seal our borders and stamp out every single case – Australia had escaped the horrors of Europe and the US.

We were back in business.

Cafes in Byron Bay, an enclave proud of its green credentials, were once again safe to make coffee in customers’ reusable cups after months of serving turmeric lattes in nasty disposable versions.

And with the sun on our shoulders and surf at the door, it seemed like the pandemic that never was.

The sacrifice had been worth it, we told ourselves. Zero Covid – an extreme policy that some influential scientists demand to see in Britain even now – was vindicated.

If the pandemic has taught us anything, however, it’s that ‘success’ and self-satisfaction can mutate as quickly as the virus.

In just a few weeks, the nation has gone from the envy of the world for its low number of deaths, quick and effective lockdowns, formidable contact tracing and routine ‘doughnut days’ – where no cases are reported – to a hermit kingdom shut off from the rest of the globe.

We could be isolated for years, according to public health experts and epidemiologists.

With our ambitions focused on elimination rather than suppression of the virus, firmly shut borders plus a paltry nine per cent vaccination rate – the lowest among the developed countries – the prospects for ‘Zero Covid’ look as dated and parochial as the Crocodile Dundee films.

As Brits pile into Wembley and Wimbledon and Americans take our spots in Sumatran surf resorts, Australians are trapped by an ideal that is rapidly proving unworkable.

More than five million residents of Sydney are in lockdown because one unvaccinated driver delivering airline staff became infected and passed it on.

The economy is suffering badly.

And it is true that the wine industry saw a stellar 31 per cent increase in production thanks to some outstanding weather.

But accountants Ernst & Young estimate that Australia’s closed borders are costing £4.2 billion a month. Sectors such as tourism have been crushed.

Our beaches may be beautiful but they lose their allure when you’re trapped here, unable to see friends and family overseas and with no fixed plans for reopening.

The only exception is a stop-start ‘bubble’ with New Zealand – another proponent of Zero Covid – which bursts at the first hint of a case in either country.

A Fortress Australia mentality could find us locked away for years. As the Prime Minister, Scott Morrison, has remarked: ‘We are prisoners of our own success.’

And what, you might ask, is success? Thirty per cent of Australians are first-generation immigrants, many with parents overseas. For them, the long-term implications are troubling.

Mental health problems are rampant, particularly among the young. The twentysomethings who once flocked to the bars of Earl’s Court in London are now floundering back home, a generation deprived of their rite of passage.

Last week, a 22-year-old woman in a police-patrolled quarantine hotel scaled two balconies, kicked in a door and escaped via an outside staircase only to be found hours later at her mother’s house.

As a police spokesman wryly noted: ‘She was fairly motivated.’

Covid has not killed many Australians, but it has certainly cowed us. We’ve regressed.

A bunch of globetrotting wanderers bred on the ‘Anzac spirit’ of courage, good humour, mateship and derring-do is now a nation of Nervous Nellies growing more insular, anxious and divided by the day.

A tribe of irritable, foot-stomping Rumpelstiltskins, bereft of a solution as we fetishise ‘zero’ case days yet hesitate to vaccinate amid confusion over safety and supply.

Our border closures were swift and brutally efficient, including threats of jail for those trying to return from India as cases there surged. Yet our vaccination roll-out has been mired in chaos, leaving ‘herd immunity’ a distant dream.

There’s no question our anti-vaxxer movement is a problem, particularly when so many Australians think they’re not in danger. For them, there’s no incentive to be vaccinated.

Others, like me, are still waiting for the jab after initially being told we were suitable for our plentiful supplies of AstraZeneca – only to have that advice withdrawn when those under 60 were considered at risk of rare blood-clotting complications. (This, despite, evidence that you are far more likely to develop clots by taking the contraceptive pill.)

Supplies of the preferred Pfizer vaccine are limited.

We’re a nation caught in Catch-22, hesitant to vaccinate yet increasingly agitated about when we will ever open up.

So far, New Zealanders have shown they are a more collegiate bunch, getting behind Prime Minister Jacinda Ardern and their own policy of isolation. But there, as in Australia, the consensus is that they are more vulnerable to an outbreak than ever before.

All eyes are on the United Kingdom to see if a high vaccination rate can bring about a sustainable way of life.

As someone who was born in New Zealand, spent my 20s in the UK, and has lived in Australia since 2000, I’ve never had less confidence in the country I’ve chosen to adopt.

There’s a detectable souring. According to the University of Sydney, Fortress Australia is fuelling ‘a negative and inwards-focused national psyche that threatens our global standing, as well as national unity and cohesion’.

Snitches used to be regarded as the lowest life form but as communities turn inward and state borders are barricaded, Australians are now actively encouraged to dob in the rule-breakers.

The government remains understandably proud of the low death rate. As Morrison put it: ‘When it comes to deaths from Covid, that is the statistic where Australia leads the world. Just the other day they had more cases in the UK in one day than Australia has had in the past 18 months.’

But as the respected Australian Financial Review put it, Zero Covid is a ‘pipe dream’, at least in the medium term.

Last week, Morrison appeared to signal the future restoration of freedoms, including the right to fly in and out of the country. But his plan is short on dates and detail, and many doubt that it’s the right decision.

More to the point, it’s currently impossible with such low levels of immunity.

As Britain embarks on its grand reopening, Australia remains crouching behind its borders, isolated at the bottom of the world.