The Coming US-EU Trade War Promises to Be Delicious Indeed

Trump is already selling a China deal as his personal triumph, which means he is going to need a new trading bad guy for 2020

I have long stated that one of the key reasons Trump wants a deal with China is so that he can go after the EU with more force. That is another reason to not expect much out a china deal.

The United States and Europe have been locked in a years-long spat over mutual claims of illegal aid to plane giants, Netherlands-based Airbus and U.S.-based Boeing Co, to help them gain advantage in the world jet business.

The case, which has been grinding its way through the World Trade Organization for almost 15 years, is approaching the final stages of arbitration.

Only the Lawyers Win

The tit-for-tat legal battle between Airbus and Boeing at the World Trade Organization could, after 15 years, be fairly described as epic.

Please consider Airbus v. Boeing at the WTO: Only the Lawyers Win

Although both sides appear to be guilty, Trump ignores the valid EU complaints.

Trade tensions between the EU and U.S. flared Monday after the U.S. said it’s considering $11 billion worth of retaliatory tariffs on a range of goods in response to illegal subsidies the EU granted to the aerospace firm.

“The EU is confident that the level of countermeasures on which the notice is based is greatly exaggerated. The amount of WTO authorized retaliation can only be determined by the WTO-appointed arbitrator,” a Commission spokesman said.

Both sides have now been found guilty of paying billions of dollars of subsidies to gain advantage in the global aircraft manufacturing business.

The EU is still waiting to hear from the WTO about what “retaliation rights” it has after the organization found in 2012 that Boeing too had received billions of dollars in illegal subsidies that had been to the detriment of Airbus. The WTO also ruled in March that the U.S. had failed to comply fully with its earlier ruling to remove all illegal subsidies that Boeing had received.

The European Commission spokesman also said Tuesday that Brussels is ready to retaliate in kind, noting that in the parallel Boeing dispute, “the determination of EU retaliation rights is also coming closer and the EU will request the WTO-appointed arbitrator to determine the EU’s retaliation rights.” 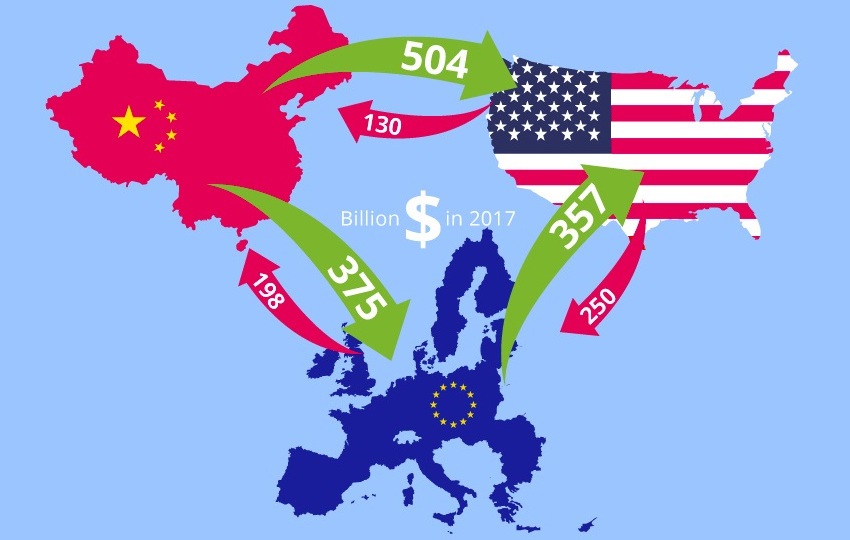 Eurointelligence is spot on with this take from Wednesday morning.

We now expect the EU to be next on Donald Trump’s list of targets for a major trade conflict. German car makers in particular should brace for a hit, with all the risks this entails for the German and eurozone economies. There is every reason to believe that Trump’s tweet yesterday is just a prelude to the opening of the real hostilities. He announced the US “will now put tariffs on $11bn of EU products” – a retaliation for Airbus subsidies which is massively-overblown and flaunts WTO rules.

Seen from Trump’s perspective, the material point is not that the EU has been irritatingly slow in agreeing its negotiating mandate for the promised new trade talks with the US, with Paris finally lifting the last objections. What clears the deck for a proper trade war with the EU is the near-certain fact that the US trade conflict with China is about to be wrapped up with a deal.

Trump, who is back in full rabble-rousing campaign mode to prepare for his 2020 re-election, is already selling a China deal to his cheering supporters as his personal triumph. The US president makes no secret of the fact that the EU, the trading bad guy, will soon be brought to heel as well by the superior will and savvy of one Donald Trump.

With Trump struggling badly to fulfill his promises on curbing immigration and building the southern border wall, strutting the stage as an active trade warrior becomes a vital electoral priority. The figure of $11bn in retaliatory US tariffs against Airbus subsidies is almost secondary, set against the size of the trade conflict that now looms.

I’ve looked at trade from both sides now

From win and lose and feel somehow

He really doesn’t know trade at all