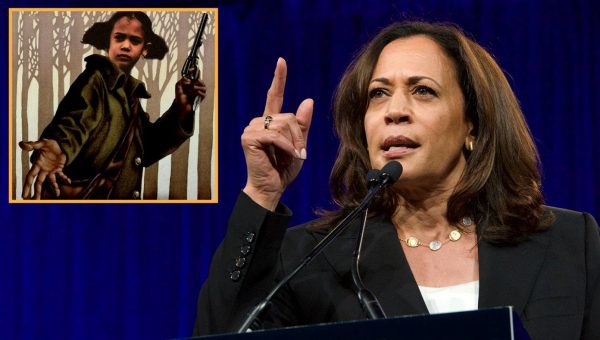 U.S.—Kamala Harris chuckles as she tells the story. Not the chuckle of an insincere politician making up a story to appeal to her base, but the chuckle of a warm, loving woman. The kind of chuckle you would chuckle while hanging out with your family or locking up non-violent drug offenders for decades.

She recalled in her interview with The Babylon Bee how as a little girl she helped slaves escape to the North on the “undewgwound wailwoad.” (Did we mention how warm and sincere she was? It was like talking to your best bud).

“My parents were pushing me in a stroller,” she says, cackling — no, chuckling — “and I must have gotten loose somehow.” (At the time, there weren’t any safety regulations on strollers, so this is not her parents’ fault, just to be clear). “Anyway, I wandered away down to the Deep South and began helping slaves get to the free states. When my parents found me years later, they were understandably upset. They said, ‘Kamala! What are you doing!?'”

“I replied, ‘I’m hewping swaves escape on da undewground wailwoad, mommy!'” Harris then revealed that one of the slaves she helped escape grew up to be none other than Albert Einstein.

Harris, with her likable laugh and authentic demeanor, went on to tell the story of how she helped “Abwaham Winkon” draft the “Emancipation Pwocwamation” and how she refused to give up her seat on a bus, launching the “Civil wights” movement.