Will now become an annual event

On Friday, President Biden hosted the leaders of Japan, India, and Australia in Washington. The meeting marked the first in-person summit of the Quad, an informal grouping that is seen as a potential foundation for an anti-China NATO-style alliance in the Pacific.

In opening remarks, none of the leaders mentioned China by name, but Beijing was clearly on everybody’s mind. The leaders called for a “free and open Indo-Pacific,” a term commonly used by US officials that essentially means a region free of Chinese influence. The “Indo-Pacific” refers to the region of the world that stretches from India to the eastern Pacific Ocean, where the US wants to maintain dominance.

President Biden has framed the US-China relationship as an ideological competition between “democracy” and “autocracy.” This Cold War mindset was echoed by the Quad leaders.

You can never be too prepared to fight Covid. pic.twitter.com/UPno64s4nv

“The Quad is an extremely significant initiative by four countries who share fundamental values, cooperating for the cause of realizing a free and open international order based on the rule of law in the Indo-Pacific,” said Japanese Prime Minister Yoshihide Suga.

Ahead of the meeting, a US official said that the Quad is only an “unofficial gathering” and not a “not a regional security organization.” But in 2020, the Quad nations held joint military exercises for the first time since 2007 and have held more since.

The Quad meeting came shortly after the US, UK, and Australia announced a new military pact that will give Canberra nuclear-powered submarines and allow the US to deploy more troops to Australia. Over the past year, the US has also signed expanded military agreements with India and has lauded efforts between Japan and Australia to increase security cooperation.

After Friday’s meeting, Suga told reporters that the leaders agreed to expand cooperation on COVID-19 vaccines, space, energy, and other areas. He said they also agreed to hold a Quad summit each year. 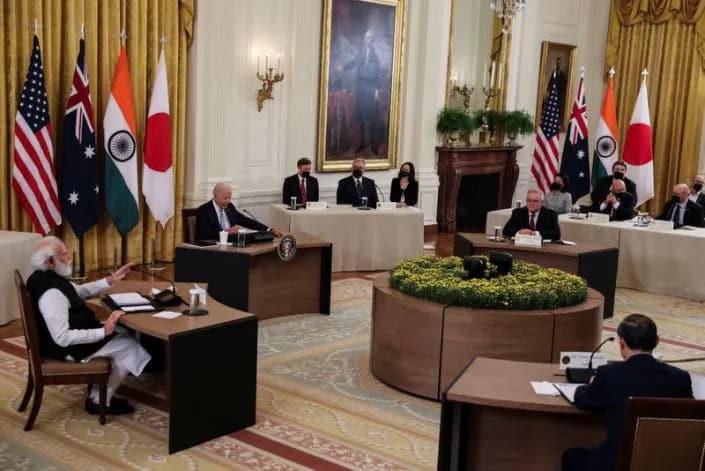 Our Benevolent Empire
6 Comments
Leave A Reply
Cancel Reply
Read the rules before you think about commenting
Telegram Group
AE has a supporting readers Telegram group where we hang out and exchange leads and takes. If you have ever donated to AE drop me a line on email and I'll send you the link to join.