WaPo: Russia Is Building Up Capacity That Would Allow It a Multi-Front Invasion With 175,000 Troops

100 of Russia's 168 "battalion tactical groups" would be involved 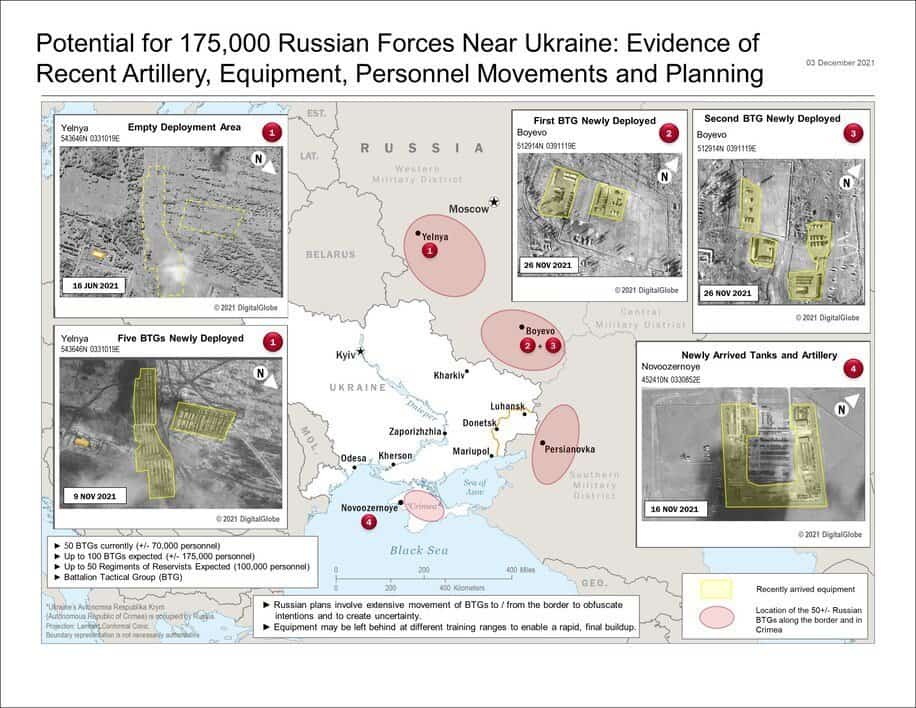 Editor’s note: Not completely sure what to think of this one, but I don’t want to be a gatekeeper. Let’s look at reporting from all corners and see how far we can figure it out together — or else everyone can make up their own mind.

As tensions mount between Washington and Moscow over a potential Russian invasion of Ukraine, U.S. intelligence has found the Kremlin is planning a multi-front offensive as soon as early next year involving up to 175,000 troops, according to U.S. officials and an intelligence document obtained by The Washington Post.

The Kremlin has been moving troops toward the border with Ukraine while demanding Washington guarantee that Ukraine will not join NATO and that the alliance will refrain from certain military activities in and around Ukrainian territory. The crisis has provoked fears of a renewed war on European soil and comes ahead of a planned virtual meeting next week between President Biden and Russian President Vladimir Putin.

“The Russian plans call for a military offensive against Ukraine as soon as early 2022 with a scale of forces twice what we saw this past spring during Russia’s snap exercise near Ukraine’s borders,” said an administration official, speaking on the condition of anonymity to discuss sensitive information. “The plans involve extensive movement of 100 battalion tactical groups with an estimated 175,000 personnel, along with armor, artillery and equipment.”

The unclassified U.S. intelligence document obtained by The Post, which includes satellite photos, shows Russian forces massing in four locations. Currently, 50 battlefield tactical groups are deployed, along with “newly arrived” tanks and artillery, according to the document.

While Ukrainian assessments have said Russia has approximately 94,000 troops near the border, the U.S. map puts the number at 70,000 — but it predicts a buildup to as many as 175,000 and describes extensive movement of battalion tactical groups to and from the border “to obfuscate intentions and to create uncertainty.” [Maskirovka alive and well at the tactical level, but a public and slow-boil buildup over many months violates every tenant of maskirovka in the strategic sense.]

The U.S. analysis of Russia’s plans is based in part on satellite images that “show newly arrived units at various locations along the Ukrainian border over the last month,” the official said.

Details of the U.S. intelligence provide a picture that Secretary of State Antony Blinken began to outline this week on a trip to Europe, where he described “evidence that Russia has made plans for significant aggressive moves against Ukraine” and warned there would be severe consequences, including high-impact economic measures, if Russia invaded.

Biden said he is preparing measures to raise the cost of any new invasion for Putin, who has dismissed the U.S. warnings as rumors and said Russia is not threatening anyone.

“What I am doing is putting together what I believe to be, will be the most comprehensive and meaningful set of initiatives to make it very, very difficult for Mr. Putin to go ahead and do what people are worried he may do,” Biden said Friday.

The Russian military moves come as Moscow has raised eyebrows in Washington with a sudden mobilization of reservists this year and a dramatic escalation of its rhetoric regarding Ukraine.

Russian officials have defended the reserve mobilization as a necessary measure to help modernize the Russian armed forces. But the administration official raised concerns about the “sudden and rapid program to establish a ready reserve of contract reservists,” which the official said is expected to add an additional 100,000 troops to the approximately 70,000 deployed now. [Surely the 100,000 wouldn’t come from a newly-established force of reservists but from another part of the 1-million military.]

The intelligence about a potential surge in forces bolsters a warning earlier this week from Blinken that Putin could quickly order an invasion of Ukraine and helps explain why Biden administration officials have been sounding alarms about the threat of imminent invasion for weeks.

This imagery is confusingly labelled as Boyevno. It is showing the vehicle stores at Pogonovo.@konrad_muzyka did some reporting on this last week https://t.co/AhbC9cEbDm pic.twitter.com/XjAIGY54w3

“We don’t know whether President Putin has made the decision to invade. We do know that he is putting in place the capacity to do so on short order should he so decide,” Blinken told reporters in Europe a day before meeting Russian Foreign Minister Sergei Lavrov. “We must prepare for all contingencies.”

Lavrov, in public comments this week, echoed Putin’s warnings about U.S. military equipment and activity encroaching on Russia’s borders and said, “The nightmare scenario of military confrontation is returning.”

The intelligence document also suggests that Russian forces may be leaving equipment behind at training facilities to allow an attack on Ukraine to commence quickly.

“Equipment may be left behind at different training ranges to enable a rapid, final buildup,” the document adds.

“The Russian troops worked out the issues of creating strike groups near the borders of our state, mobilization measures, logistical support of groups, [and] transfer of significant military contingents, including by air,” from Russia to the border with Ukraine, the official said, speaking on the condition of anonymity to discuss sensitive analysis.

While laying the groundwork for an invasion, the Russian government has also been waging a propaganda campaign, the U.S. administration official said.

“Additionally, in the past month, our information indicates Russian influence proxies and media outlets have started to increase content denigrating Ukraine and NATO, in part to pin the blame for a potential Russian military escalation on Ukraine,” the official said.

“Recent information also indicates that Russian officials proposed adjusting Russia’s information operations against Ukraine to emphasize the narrative that Ukrainian leaders had been installed by the West, harbored a hatred for the ‘Russian world,’ and were acting against the interests of the Ukrainian people.”

In his comments in Latvia, Blinken cautioned the Ukrainians not to give Russia a pretext for military action.

“We’re also urging Ukraine to continue to exercise restraint because, again, the Russian playbook is to claim provocation for something that they were planning to do all along,” he said. [Sounds like the Russian moves are already bearing some limited fruit. DC exerting influence on Kiev to try to restrain it is a definite first.]

Putin has demanded the United States and its allies provide signed assurances excluding any expansion of NATO to include Ukraine and Georgia and limiting military activity near Russia’s borders, most notably in and around Ukraine.

The demands for a new European security pact come after Putin has suggested for months that U.S. and allied military activities in Ukraine and near Russia’s borders are crossing a red line for the Kremlin.

Russia needs “precise legal, judicial guarantees because our Western colleagues have failed to deliver on verbal commitments they made,” Putin said in a speech at the Kremlin this week, suggesting the start of “substantive talks on this topic.”

Putin has long railed against NATO expansion into former Warsaw Pact states as a disrespectful encroachment on Moscow. He said a concrete agreement must “rule out any further eastward expansion of NATO and the deployment of weapons systems posing a threat to us in close proximity to Russia’s territory.”

White House press secretary Jen Psaki rejected out of hand the idea that Washington would provide a guarantee that Ukraine will not enter NATO.

“NATO member countries decide who is a member of NATO, not Russia,” Psaki told reporters during a White House briefing Friday. “That is how the process has always worked and how it will proceed. I think it’s important to remember where the provocative action is coming from. It’s not the United States. It’s not Ukraine.”

U.S. and Ukrainian officials and military analysts believe Russia would mount a far larger-scale invasion now than it did in 2014, when the country annexed Crimea and fueled a separatist uprising in Ukraine’s east. The plan, the officials and analysts believe, could be to force Ukrainian troops to fight on multiple fronts, seeking not so much territory but rather a capitulation by Kyiv and its Western backers that results in the security guarantees Putin wants. Military analysts have compared that strategy to Moscow’s 2008 invasion of Georgia.

In comments this week, Putin said drills with U.S. nuclear-capable strategic bombers flying over the Black Sea posed a threat to Moscow, along with U.S. missile defense systems in Poland and Romania. He also expressed concern about NATO deploying missiles on Ukrainian territory that could have a flight time of seven to 10 minutes to Moscow — though no such plans have been announced.

“Today we actually have constant alert troops. Today we have no forces that we need to gather and find. All the troops are on constant alert. We have formations called battalion tactical groups. These are the forces that are ready for deployment in an hour after an alert signal. We have 168 such groups today and this is a very high figure,” the defense chief said at the Territory of Senses educational youth forum.

50 battalion tactical groups would thus be 30 percent of the total. 70,000 troops would represent 25 percent of the active-duty manpower of the Ground Forces, but many would have been from the paratroop, and air and air defense armies.