Ukraine’s Zelensky Visits the Front Line After Meeting With US General — US, Allies Push NATO Membership

This against the backdrop of Ukraine pulling out of the Minsk talks initiated seven years ago, and while Russia has not had an ambassador in Washington since March 21 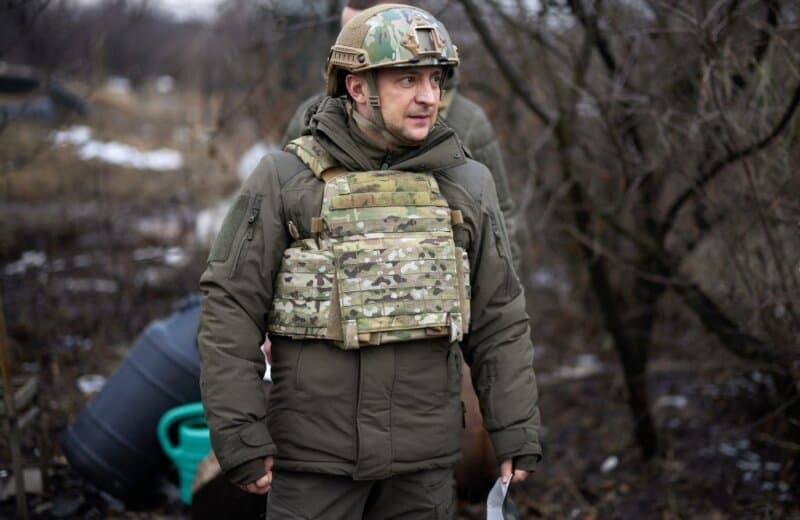 The pro-government press in Ukraine has announced that President Volodymyr Zelensky is to go to the Donbass conflict zone tomorrow, April 8. That means that within hours he will arrive in what is at the moment the world’s most dangerous hotspot, fraught as it is with the potential for a confrontation between the world’s two major nuclear powers. No details have been provided concerning the proposed trip.

This will occur against the backdrop of Ukraine pulling out of the Minsk talks with the Trilateral Contact Group on Ukraine that were initiated seven years ago. It will also happen when Russia has not had an ambassador in the U.S. since March 21, when Anatoly Antonov was summoned back to Moscow.

It’s not too far-fetched to wonder how the Berlin Crisis or the Cuban Missile Crisis would have culminated if the U.S. and USSR weren’t speaking to each other. 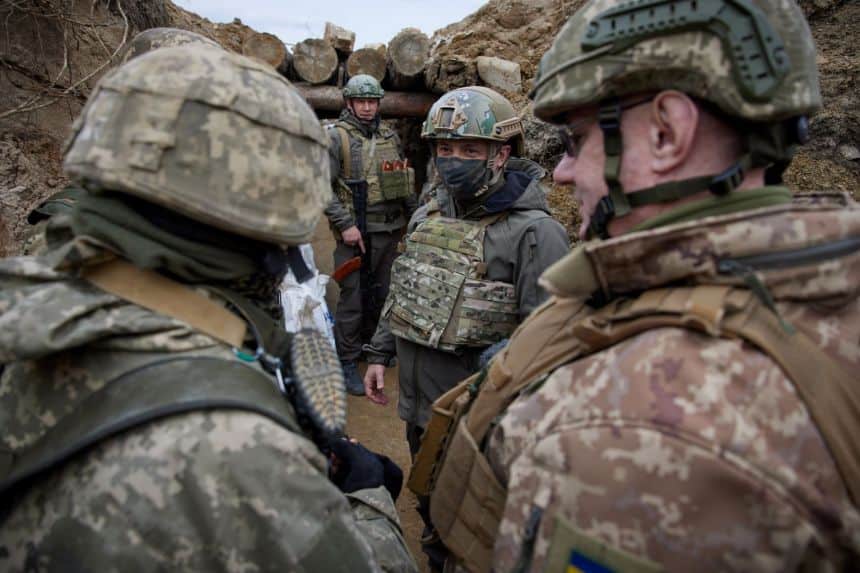 It is inconceivable that Zelensky would have decided on such a gesture – to visit a war zone after withdrawing from one of two key peace talk formats – without not only notifying the U.S. and NATO but having their express approval.

To underscore the above assumption, the Ukrainian press disclosed today that more than one U.S. official has recently discussed Ukraine being brought into NATO as a full member. Being a member would entitle it to call for a consultation with the other members of the military bloc under it’s Article 5 collective military assistance provision. If Ukraine won its case with NATO all thirty members would be obligated to participate in military action on its side.

What has been said lately by American and other NATO member states is not tantamount to Ukraine’s admission to NATO, of course, but is precariously close to suggesting Ukraine may be a de facto Article 5 partner by extension, one degree removed. That it would in effect be under NATO’s military – and nuclear – umbrella.

Yesterday White House spokesman Jen Psaki said, as related in a summary of her statement by Reuters, that “Ukraine has long aspired to join NATO as a member and that the Biden administration has been discussing that aspiration with the country.” She added: “We are strong supporters of them, we are engaged with them…but that is a decision for NATO to make.”

The operative words are “We are strong supporters of them, we are engaged with them.” That is what is intended to be heard by both Ukraine and Moscow. 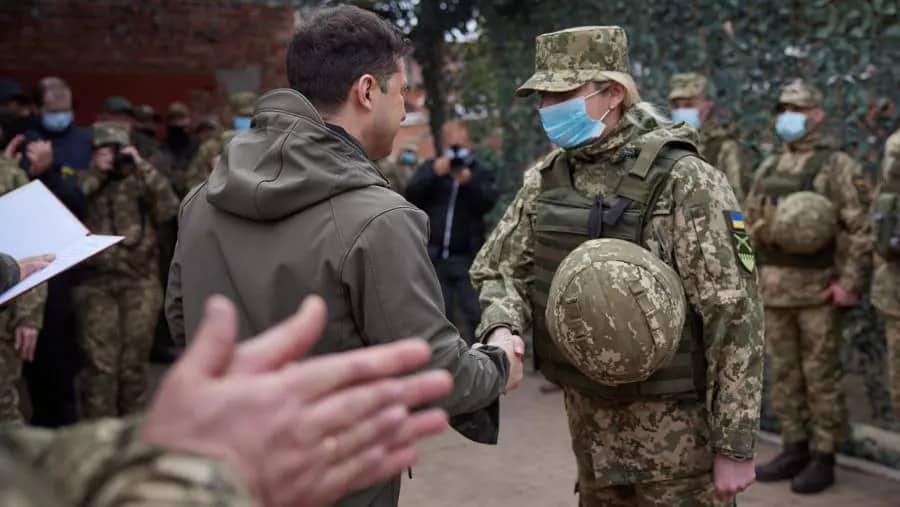 Earlier this year the Ukrainian parliament, the Verkhovna Rada, passed a draft law amending legislation on the Security Service of Ukraine. Today’s local press quoted U.S. Chargé d’Affaires Kristina Kvien who, after meeting with the deputy leading the reform measure, affirmed that “Reforming the Security Service of Ukraine in line with the Euro-Atlantic principles will become Ukraine’s key step on its path toward NATO.”

The same American envoy who appears to be overseeing Ukrainian lawmakers’ actions, to put it politely, is also telling them which internal policies need to be adjusted to enter the U.S.-dominated military bloc.

Lithuanian Foreign Minister Gabrielius Landsbergis is also quoted in the Ukrainian press as recommending the nation be granted a program that is the final stage to NATO membership, stating: “I’m convinced, NATO could have reiterated its offer on providing a Membership Action Plan to Ukraine, and we have just started coordinating the issue with our colleagues from [the] Baltic States.” In rhetoric that has become prevalent among Western officials in recent days the measure he’s urging would send “a strong signal to Russia that Ukraine is choosing a Transatlantic path, and that this saw feedback from among NATO Allies.”

As the Ukrainian president leaves for the Donbass conflict zone the foreign minister of Poland, Zbigniew Rau, will arrive in Kiev for talks with his Ukrainian counterpart. Interfax-Ukraine says this of their impending meeting:

“The foreign ministries’ heads will also pay attention to the aggravation of the security situation in eastern Ukraine and in the temporarily occupied Crimea, discuss the buildup of Russian troops near the borders of Ukraine, the growth of the intensity of Russian propaganda.”

Poland is at the moment threatening its neighbor Belarus over the treatment of ethnic Polish activists in the latter country. Belarus is the last neutral state on Russia’s entire western border. Since last summer Belarusian President Alexander Lukashenko has warned of the threat of a NATO-sanctioned invasion of the western part of his country by Poland and Lithuania. The Polish and Ukrainian foreign ministers may well lay the groundwork for simultaneous moves against Eastern Ukraine and Western Belarus.

What the U.S. and NATO client Volodymyr Zelensky says and does in the Donbass will be known in a few hours. One thing is certain: his words and actions will not contribute to deescalating the worsening crisis there.

This morning the Ukrainian English-language press confirms that President Volodymyr Zelensky has arrived on the front line between government troops and the independent Donbass region of former Eastern Ukraine. While there he presented awards to service members and pledged to “remember every warrior who died defending our state.”

Earlier the website of the Ukrainian head of state announced that ‘Volodymyr Zelenskyy is going to Donbas as the Supreme Commander-in-Chief to communicate with the military and support the fighting spirit of the defenders.” That is, he’s gone there in a military and not a political or diplomatic capacity.

Yesterday Air Chief Marshal Sir Stuart Peach, chairman of the NATO Military Committee and senior military advisor to NATO’s Secretary General, left the Ukrainian capital after a two-day visit there. During his stay he met with President Zelenskyy and the Commander-in-Chief of the Armed Forces of Ukraine, Colonel-General Ruslan Khomchak.

NATO reported that Peach toured Ukraine’s National Land Forces Academy and discussed NATO-Ukraine military cooperation and “the security situation in and around Ukraine.”

The chairman of NATO’s 30-nation Military Committee stated – hours before Zelensky departed for the eastern war zone: “NATO Allies are united in their condemnation of Russia’s illegal annexation of Crimea, and its aggressive actions in eastern Ukraine. We call on Russia to end its support for militants in eastern Ukraine and withdraw its forces from Ukrainian territory. Ukraine is one of NATO’s closest and most important partners.”

If the Zelensky administration – and others in the world who pay attention to such matters – had any remaining doubts where NATO stood in relation to the armed conflict in the Donbass region, Peach’s unequivocal, indeed blunt if not bellicose, comments should dispel them readily enough.

Peach also visited Lviv, where he consulted with the head of the nation’s military, Colonel-General Ruslan Khomchak. The two are reported to have discussed Ukraine’s Enhanced Opportunities Partnership with NATO and its continuing role in the military bloc’s Resolute Support Mission in Afghanistan, Kosovo Force in Kosovo and the NATO Response Force. Three days ago it was announced that Ukraine became the first non-NATO member to join the Response Force. NATO’s training of Ukrainian armed forces in war zones and post-war missions has been instrumental in preparing them for the war they’re waging now.

On June 12, 2020 NATO declared Ukraine to be an Enhanced Opportunity Partner, which in the words of Secretary General Jens Stoltenberg would provide the nation with greater overall military and weapons interoperability with NATO while integrating its military in exercises inside the country and outside it.

In short, since Ukraine became the first nation incorporated into NATO’s Partnership for Peace program in 1994, the military alliance has been developing it as the proxy military force it has been operating as in the seven-year war in the Donbass.

The UNIAN news agency also reports today that Britain’s Secretary of State for Defense Ben Wallace hosted a virtual meeting with fellow NATO member state colleagues from the U.S. (Acting Under Secretary of Defense for Policy Amanda Dory), Canada, Lithuania and Poland – the latter two NATO’s main military assets near Ukraine – in which the five nations’ defense officials “condemned Russia’s military activity near the borders with Ukraine” and “reaffirmed their unwavering support for Ukraine’s sovereignty, territorial integrity, and Euro-Atlantic aspirations.”

Again, Ukraine’s comedian-cum-commander-in-chief Zelensky could be excused for believing he has the full weight of American and NATO support behind him as he inches closer to war with Russia.