The protesters — the vast majority of whom did not wear masks — carried signs and wore t-shirts indicating a variety of motivations and ideologies in opposition to face coverings.

Some demanded freedom, some were critical of the Coalition Avenir Québec government, Premier François Legault or public health director Dr. Horacio Arruda, and others espoused various theories about COVID-19 and U.S. politics.

“I find it illogical,” said Nathalie Warren, who travelled from Saint-Jean-sur-Richelieu, Que. for the protest.

“Say we go into a restaurant,” she said. “We walk in wearing a mask, because, what, COVID is there? Then we sit down and we can take the masks off because, what, the COVID is gone?” 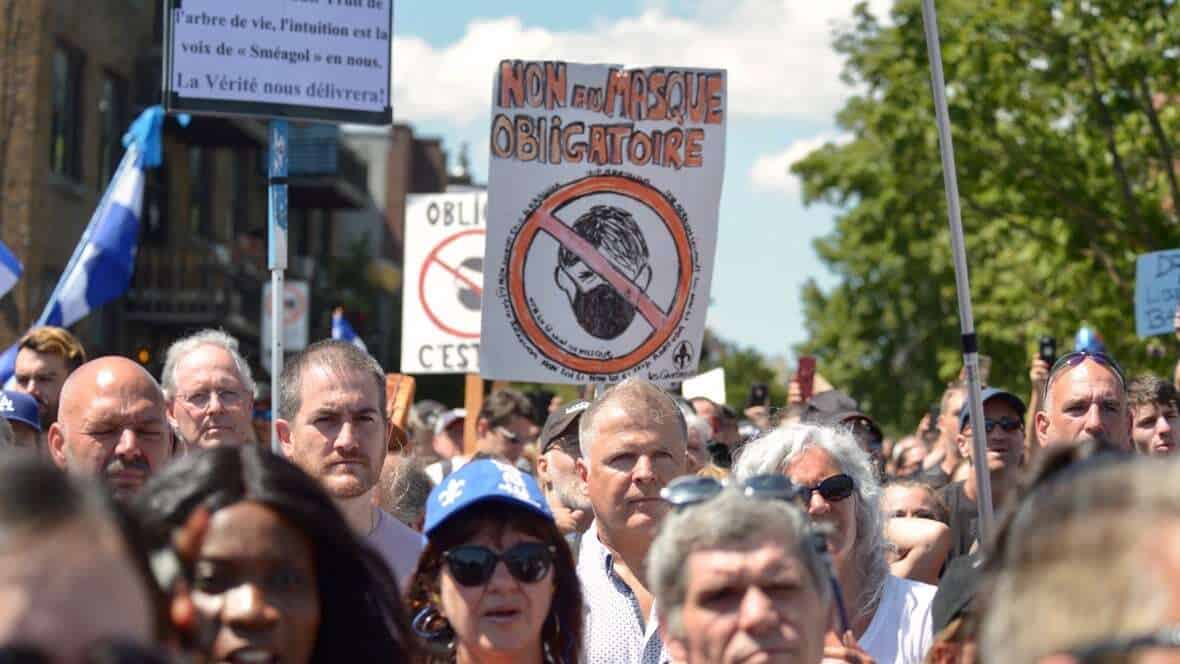 Under the government’s regulations, masks are mandatory in restaurants when clients are moving around because it is harder to maintain a physical distance from others in those instances, provincial health authorities have said. When a client is seated, they may remove their mask as long as they are at a two-metre distance from others.

“I’m not OK with children going to school wearing masks, and physical distancing,” said Irène Sarmiento. “It makes no sense. The children aren’t to blame. The population is being abused.”

So far, the Quebec government has not made masks mandatory for students heading back to school.

There were frequent spontaneous chants of “liberté” as the march wound from the main gates of McGill University on Sherbrooke Street to the CBC/Radio-Canada building on René-Lévesque Boulevard. Montreal police surveyed the event from motorcycles and bicycles.

At previous anti-mask protests in the province, demonstrators argued that mandatory mask rules are not fair and that the threat of COVID-19 is not as serious as is being reported.

On Saturday, some people made a show of embracing each other or exchanging double-cheek kisses.

During speeches at the end, there were loud cheers for suggestions the mask law had no scientific basis and was instead an effort to control the population.