The Hasidim Are Just About the Best Americans You Can Find

There’s an old joke (I first heard it in the 1960’s) about a Brooklyn Hasid who decides to take a bus trip to Florida. On the way, the bus makes a rest stop at a rural Georgia gas station/grocery store. The Hasid gets off the bus to stretch his legs and notices a group of “good old boys” intently staring at him. After a minute or two of this, the Hasid walks up to the group and says, “Vat’s da matta? You neva saw a Yankee before?”

On November 8, in defiance of New York City and State edicts, the Satmar Hasidim held a wedding attended by thousands of guests standing shoulder to shoulder in an indoor venue. The Hasidim went to unusual lengths to arrange the event without the authorities becoming aware of it. Invitations were by word of mouth only. Community newspapers cooperated by not publishing any advance notices.

After the fact, officials announced that they would levy a $15,000 fine on the wedding’s “organizers.” These “organizers” might well reply to those censorious officials, “What’s the matter? You’ve never seen Americans before?”

America was founded upon principles of human rights and liberty delineated in the Declaration of Independence. These rights include the right to assemble, to freely associate, to conduct commerce, and to practice one’s religion. The United States government was established by the Constitution, which attempts to codify the principles of the Declaration of Independence. Neither document specifies exceptions to human rights and liberty based on “science,” pandemic, or “emergency.”

The Hasidic movement was founded in the Ukraine in the 18th century. Hasidim have had more than two centuries of practice defying hateful, overreaching authority – Tsars, Cossacks, kings, emperors, dumas, dictators, and prime ministers. In historical memory they have seen and resisted and survived much worse than Andrew Cuomo and Bill de Blasio. This history of living according to their personal beliefs and civil disobedience in the face of rights-crushing authority is quintessentially American. It is little wonder that Hasidim, who came to America as an endangered species, have thrived and prospered in the U.S.

The Bill of Rights forbids the government to establish a religion. It’s too bad that there is no similar explicit ban on establishment of “science.”

For too many Americans, “Science” has taken on the mantle of “established” truth worthy of legal enforcement that religion wore prior to the late 18th century. It is no accident then that “Science” has come to play the evil role, justifying state crimes, that “Religion” played in earlier times.

Indeed, the worst crimes of the 20th century were perpetrated by states in the name of “Science,” specifically “scientific” racism and eugenics. These crimes were committed in the U.S. and, even more horribly, in Europe. The views of today’s Hasidim toward government edicts guided by “Science” are strongly colored by the fact that millions of their ancestors were lawfully murdered in Europe by a government guided by that day’s “Science” of eugenics and racism.

It is no coincidence that today’s Hasidim will have none of it. Nor should they. Nor should we.

It is the philosophy of human rights and liberty applied consistently and equally to all that makes America America. If it takes Hasidim, who live according to ancient Biblical and Rabbinic law and 18th century Eastern European customs and fashion, and who may choose to ignore even the best scientific advice, the better to pursue their own happiness, to remind us of this, well, more power to them. L’Haim, to life!

The day I salute jews is the day I lose my soul.

There is big difference between respecting an establishment of religion and creating one.
The Bill of Rights prohibits the first but not the second.

“Vat’s da matta? You neva saw a Yankee before?” 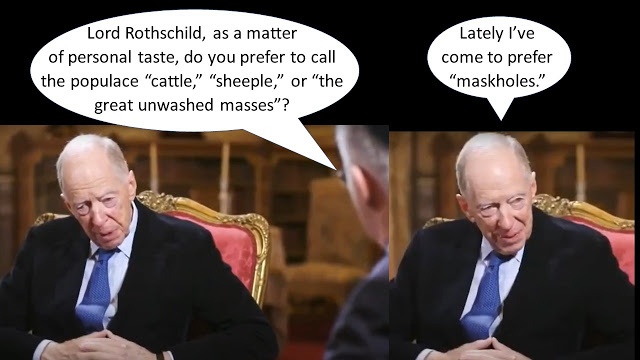 some do cherish freedom