Could be as low as 0.01% — ten times less than flu — people don't grasp how much covid-19 is already out there, maybe many millions

Editor’s note: The Wall Street Journal has a paywall but Texasags snatches some highlights.

Dr. Eran Bendavid and Dr. Jay Bhattacharya, professors of medicine at Stanford, conclude the current estimates about the Covid-19 fatality rate may be too high by orders of magnitude. They point to the significant “denominator problem” often discussed here by those who are familiar with advanced modeling.

If it’s true that the novel coronavirus would kill millions without shelter-in-place orders and quarantines, then the extraordinary measures being carried out in cities and states around the country are surely justified. But there’s little evidence to confirm that premiseand projections of the death toll could plausibly be orders of magnitude too high.

Fear of Covid-19 is based on its high estimated case fatality rate2% to 4% of people with confirmed Covid-19 have died, according to the World Health Organization and others. So if 100 million Americans ultimately get the disease, two million to four million could die. We believe that estimate is deeply flawed. The true fatality rate is the portion of those infected who die, not the deaths from identified positive cases.

Population samples from China, Italy, Iceland and the U.S. provide relevant evidence. On or around Jan. 31, countries sent planes to evacuate citizens from Wuhan, China. When those planes landed, the passengers were tested for Covid-19 and quarantined. After 14 days, the percentage who tested positive was 0.9%. If this was the prevalence in the greater Wuhan area on Jan. 31, then, with a population of about 20 million, greater Wuhan had 178,000 infections, about 30-fold more than the number of reported cases. The fatality rate, then, would be at least 10-fold lower than estimates based on reported cases.

Next, the northeastern Italian town of V, near the provincial capital of Padua. On March 6, all 3,300 people of V were tested, and 90 were positive, a prevalence of 2.7%. Applying that prevalence to the whole province (population 955,000), which had 198 reported cases, suggests there were actually 26,000 infections at that time. That’s more than 130-fold the number of actual reported cases. Since Italy’s case fatality rate of 8% is estimated using the confirmed cases, the real fatality rate could in fact be closer to 0.06%.

The epidemic started in China sometime in November or December. The first confirmed U.S. cases included a person who traveled from Wuhan on Jan. 15, and it is likely that the virus entered before that: Tens of thousands of people traveled from Wuhan to the U.S. in December. Existing evidence suggests that the virus is highly transmissible and that the number of infections doubles roughly every three days. An epidemic seed on Jan. 1 implies that by March 9 about six million people in the U.S. would have been infected. As of March 23, according to the Centers for Disease Control and Prevention, there were 499 Covid-19 deaths in the U.S. If our surmise of six million cases is accurate, that’s a mortality rate of 0.01%, assuming a two week lag between infection and death. This is one-tenth of the flu mortality rate of 0.1%. Such a low death rate would be cause for optimism.

A universal quarantine may not be worth the costs it imposes on the economy, community and individual mental and physical health. We should undertake immediate steps to evaluate the empirical basis of the current lockdowns.

boing boing sends everyone home and asks for a bailout. the 737 fiasco is history.
the airlines want a handout, because no one is flying because the economy is s**t.
biz goes bankrupt not because the murikan consumer is tapped out but because of the virus. lockdown.

the eu central bank is tapped out not because of it s**t monetary policy but because everyone is at home and not working. lockdown.

french troops leave the ME to fight the virus at home.
u.s. leaves ME bases so their troop don’t catch the bug.

listen to fools like bannon who have already twisted it around.
the economy is cratering because of the virus.
forgotten is that it was overdue to crater.

in the meantime the govt dishes more money out to the khazarian bankers.

corona virus should win some sort of a nobel prize for its miraculous ability to be everything to everybody.

yes, people are dying. people die all the time. but now their death has meaning. it means the rocky-fellers and the rot-schilds and the POS in the murikan and EU banks walk away free – again.

Was it from Wuhan or planted in Wuhan?

In a 1981 book novelist Dean Koontz predicted the Wuhan Virus. 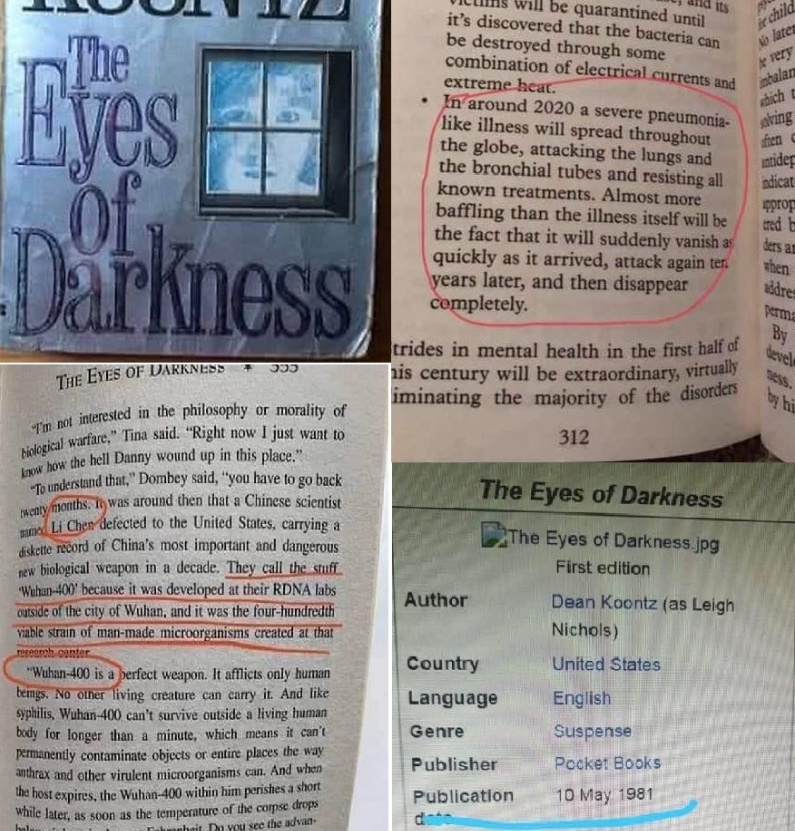 The numbers by any Government trying to install a form of Martial Law is pure crap. Death rates should be based on entire population, always. Who ever heard of a death rate based on incomplete data or worse, manipulated data … just more crap from our new USSR Government. as of today 944/330,000,000 equals .0000028% death rate

Maybe more of this will get out and save us from the irrationality.

I’ll go with the independent Stanford University scientists/doctors as opposed to what the current Washington administration is putting out as the ‘real’ statistics….skewed to panic the population and usurp more power for the president and ‘his’ departments….
like Homeland Security, Dept of Justice etc. – and to weaken environmental as well as financial laws which are somewhat binding on Wall St. And who said that the Covid19
virus was ’caused’ by China? The US government! There is no proof of that and the Chinese government is now investigating exactly where it did come from…I’m guessing it was dropped off by ‘someone’ in October 2019 while at the military games…

I think the Chinese authorities may have identified ” Patient Zero “, as a US athlete/military officer in China for the Wuhan military games.

The epidemic started in China sometime in November or December. ?

Virologist Gismondo: “Coronavirus in Italy since November. At work to find a cure”
The expert from the “Sacco” hospital in Milan: “The Italian stock that we isolated did not show more aggressive characteristics” by ILARIA ULIVELLI, lanzione.it
https://www.lanazione.it/firenze/cronaca/coronavirus-virologa-gismondo-1.5062536

Coronavirus may have been in Italy for weeks before it was detected
Lorenzo Tondo Last modified on Wed 18 Mar 2020 10.57 GMT. The Guardian
The new coronavirus may have circulated in northern Italy for weeks before it was detected, seriously complicating efforts to track and control its rapid spread across Europe. The claim follows laboratory tests that isolated a strain of the virus from an Italian patient, which showed genetic differences compared with the original strain isolated in China and two Chinese tourists who became sick in Rome.
https://www.theguardian.com/world/2020/feb/28/coronavirus-may-have-been-in-italy-for-weeks-before-it-was-detected

Massimo Galli, professor of infectious diseases at the University of Milan and director of infectious diseases at the Luigi Sacco hospital in Milan, said preliminary evidence suggested the virus could have been spreading below the radar in the quarantined areas. “I can’t absolutely confirm any safe estimate of the time of the circulation of the virus in Italy, but … some first evidence suggest that the circulation of the virus is not so recent in Italy,” he said, amid suggestions the virus may have been present since mid-January. The beginnings of the outbreak, which has now infected more than 821 people in the country and has spread from Italy across Europe, were probably seeded at least two or three weeks before the first detection and possibly before flights between Italy and China were suspended at the end of January, say experts.

The findings will be deeply concerning for health officials across Europe who have so far concentrated their containment efforts on identifying individuals returning from high risk areas for the virus, including Italy, and people with symptoms as well as those who have come in contact with them.The new claim emerged as the World Health Organization warned that the outbreak was getting bigger and could soon appear in almost every country. The impact risk was now very high at a global level, it said.“The scenario of the coronavirus reaching multiple countries, if not all countries around the world, is something we have been looking at and warning against since quite a while,” a spokesman said.

The coronavirus that causes Covid-19 may have spread beyond China before the health authorities had even discovered the disease, according to the Italian professor who recently said there had been “very strange pneumonias” in Europe as early as November last year. Remuzzi said he had learned about the cases from a few general practitioners and he has not yet been able to verify the information. But he said there are some other suspicious cases he “knows for sure”, including two pneumonia cases in Scanzorosciate in northern Italy in December, where the patients developed high fever, a cough and had difficulty in breathing.
He said there had also been 10 patients who developed bilateral interstitial pneumonia in two other nearby towns, Fara Gera D’Adda and Crema, who had similar symptoms.https://www.scmp.com/news/china/science/article/3076792/italian-professor-repeats-warning-coronavirus-may-have-spread