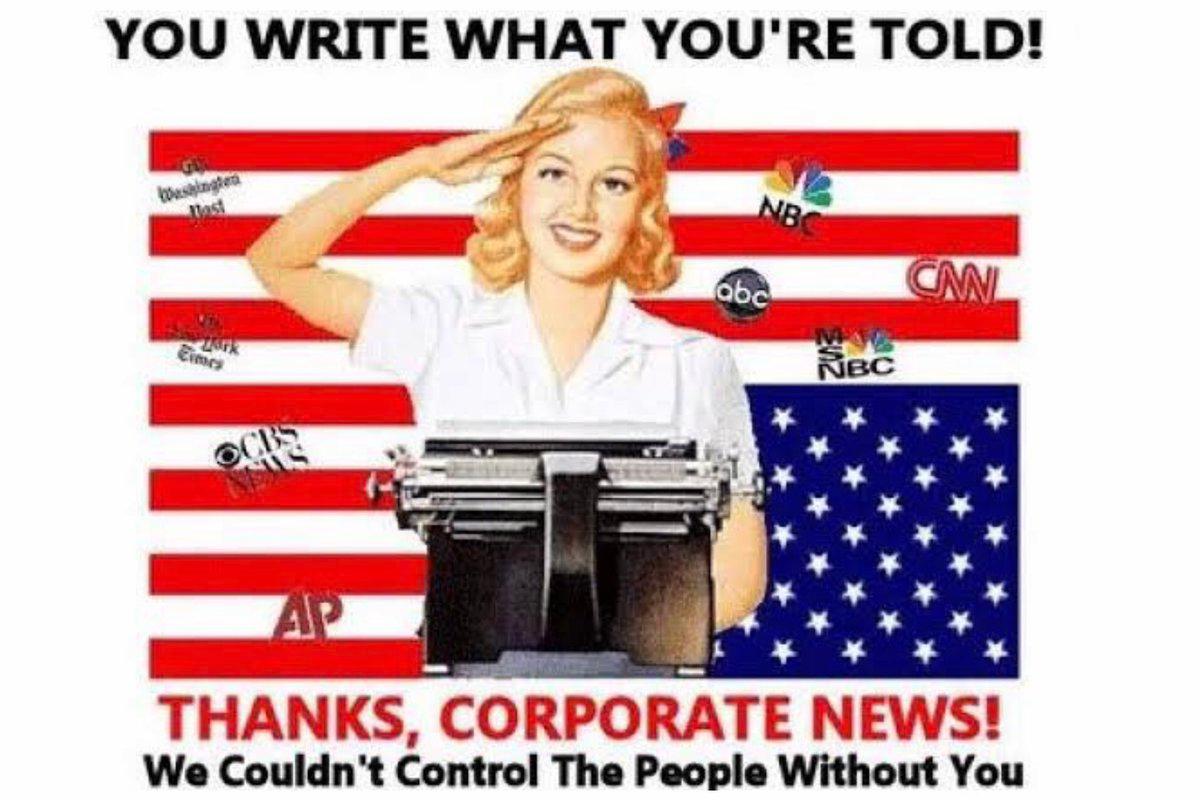 The New York Times has publicly acknowledged that it sends some of its stories to the US government for approval from “national security officials” before publication.

This confirms what veteran New York Times correspondents like James Risen have said: The American newspaper of record regularly collaborates with the US government, suppressing reporting that top officials don’t want made public.

On June 15, the Times reported that the US government is escalating its cyber attacks on Russia’s power grid. According to the article, “the Trump administration is using new authorities to deploy cybertools more aggressively,” as part of a larger “digital Cold War between Washington and Moscow.”

In response to the report, Donald Trump attacked the Times on Twitter, calling the article “a virtual act of Treason.”

The New York Times PR office replied to Trump from its official Twitter account, defending the story and noting that it had, in fact, been cleared with the US government before being printed.

“Accusing the press of treason is dangerous,” the Times communications team said. “We described the article to the government before publication.”

“As our story notes, President Trump’s own national security officials said there were no concerns,” the Times added.

Do you believe that the Failing New York Times just did a story stating that the United States is substantially increasing Cyber Attacks on Russia. This is a virtual act of Treason by a once great paper so desperate for a story, any story, even if bad for our Country…..

Accusing the press of treason is dangerous.
We described the article to the government before publication. As our story notes, President Trump’s own national security officials said there were no concerns. https://t.co/MU020hxwdc pic.twitter.com/4CIfcqKoEl

Indeed, the Times report on the escalating American cyber attacks against Russia is attributed to “current and former [US] government officials.” The scoop in fact came from these apparatchiks, not from a leak or the dogged investigation of an intrepid reporter.

But what was entirely overlooked was the most revealing thing in the New York Times’ statement: The newspaper of record was essentially admitting that it has a symbiotic relationship with the US government.

In fact, some prominent American pundits have gone so far as to insist that this symbiotic relationship is precisely what makes someone a journalist.

In May, neoconservative Washington Post columnist Marc Thiessen — a former speechwriter for President George W. Bush — declared that WikiLeaks publisher and political prisoner Julian Assange is “not a journalist”; rather, he is a “spy” who “deserves prison.” (Thiessen also once called Assange “the devil.”)

What was the Post columnist’s rationale for revoking Assange’s journalistic credentials?

Unlike “reputable news organizations, Assange did not give the U.S. government an opportunity to review the classified information WikiLeaks was planning to release so they could raise national security objections,” Thiessen wrote. “So responsible journalists have nothing to fear.”

In other words, this former US government speechwriter turned corporate media pundit insists that collaborating with the government, and censoring your reporting to protect so-called “national security,” is definitionally what makes you a journalist.

This is the express ideology of the American commentariat.

Julian Assange is no hero. He is the devil. https://t.co/LCXdRlTLKG

NY Times editors ‘quite willing to cooperate with the government’

The symbiotic relationship between the US corporate media and the government has been known for some time. American intelligence agencies play the press like a musical instrument, using it it to selectively leak information at opportune moments to push US soft power and advance Washington’s interests.

But rarely is this symbiotic relationship so casually and publicly acknowledged.

1. #JamesRisen: "A top CIA official once told me that his rule of thumb for whether a covert operation should be approved was, “How will this look on the front page of the New York Times?” https://t.co/YIUtpTthe8

Risen detailed how his editors had been “quite willing to cooperate with the government.” In fact, a top CIA official even told Risen that his rule of thumb for approving a covert operation was, “How will this look on the front page of the New York Times?”

There is an “informal arrangement” between the state and the press, Risen explained, where US government officials “regularly engaged in quiet negotiations with the press to try to stop the publication of sensitive national security stories.”

“At the time, I usually went along with these negotiations,” the former New York Times reported said. He recalled an example of a story he was writing on Afghanistan just prior to the September 11, 2001 attacks. Then-CIA Director George Tenet called Risen personally and asked him to kill the story.

“He told me the disclosure would threaten the safety of the CIA officers in Afghanistan,” Risen said. “I agreed.”

Risen said he later questioned whether or not this was the right decision. “If I had reported the story before 9/11, the CIA would have been angry, but it might have led to a public debate about whether the United States was doing enough to capture or kill bin Laden,” he wrote. “That public debate might have forced the CIA to take the effort to get bin Laden more seriously.”

This dilemma led Risen to reconsider responding to US government requests to censor stories. “And that ultimately set me on a collision course with the editors at the New York Times,” he said.

“After the 9/11 attacks, the Bush administration began asking the press to kill stories more frequently,” Risen continued. “They did it so often that I became convinced the administration was invoking national security to quash stories that were merely politically embarrassing.”

One year ago: Former New York Times national security reporter James Risen reveals how the paper repeatedly suppressed stories at the request of the Obama and Bush administrations https://t.co/pJ2BAPluqH

In the lead-up to the Iraq War, Risen frequently “clashed” with Times editors because he raised questions about the US government’s lies. But his stories “stories raising questions about the intelligence, particularly the administration’s claims of a link between Iraq and Al Qaeda, were being cut, buried, or held out of the paper altogether.”

The Times’ executive editor Howell Raines “was believed by many at the paper to prefer stories that supported the case for war,” Risen said.

In another anecdote, the former Times journalist recalled a scoop he had uncovered on a botched CIA plot. The Bush administration got wind of it and called him to the White House, where then-National Security Adviser Condoleezza Rice ordered the Times to bury the story.

Risen said Rice told him “to forget about the story, destroy my notes, and never make another phone call to discuss the matter with anyone.”

“The Bush administration was successfully convincing the press to hold or kill national security stories,” Risen wrote. And the Barack Obama administration subsequently accelerated the “war on the press.”

In their renowned study of US media, “Manufacturing Consent: The Political Economy of the Mass Media,” Edward S. Herman and Chomsky articulated a “propaganda model,” showing how “the media serve, and propagandize on behalf of, the powerful societal interests that control and finance them,” through “the selection of right-thinking personnel and by the editors’ and working journalists’ internalization of priorities and definitions of newsworthiness that conform to the institution’s policy.”

But in some cases, the relationship between US intelligence agencies and the corporate media is not just one of mere ideological policing, indirect pressure, or friendship, but rather one of employment.

In the 1950s, the CIA launched a covert operation called Project Mockingbird, in which it surveilled, influenced, and manipulated American journalists and media coverage, explicitly in order to direct public opinion against the Soviet Union, China, and the growing international communist movement.

Legendary journalist Carl Bernstein, a former Washington Post reporter who helped uncover the Watergate scandal, published a major cover story for Rolling Stone in 1977 titled “The CIA and the Media: How America’s Most Powerful News Media Worked Hand in Glove with the Central Intelligence Agency and Why the Church Committee Covered It Up.”

Bernstein obtained CIA documents that revealed that more than 400 American journalists in the previous 25 years had “secretly carried out assignments for the Central Intelligence Agency.”

“Some of these journalists’ relationships with the Agency were tacit; some were explicit. There was cooperation, accommodation and overlap. Journalists provided a full range of clandestine services—from simple intelligence gathering to serving as go‑betweens with spies in Communist countries. Reporters shared their notebooks with the CIA. Editors shared their staffs. Some of the journalists were Pulitzer Prize winners, distinguished reporters who considered themselves ambassadors without‑portfolio for their country. Most were less exalted: foreign correspondents who found that their association with the Agency helped their work; stringers and freelancers who were as interested in the derring‑do of the spy business as in filing articles; and, the smallest category, full‑time CIA employees masquerading as journalists abroad. In many instances, CIA documents show, journalists were engaged to perform tasks for the CIA with the consent of the managements of America’s leading news organizations.”

However, he added, “By far the most valuable of these associations, according to CIA officials, have been with the New York Times, CBS and Time Inc.”

These layers of state manipulation, censorship, and even direct crafting of the news media show that, as much as they claim to be independent, The New York Times and other outlets effectively serve as de facto spokespeople for the government — or at least for the US national security state.