Painting their faces green with chemicals 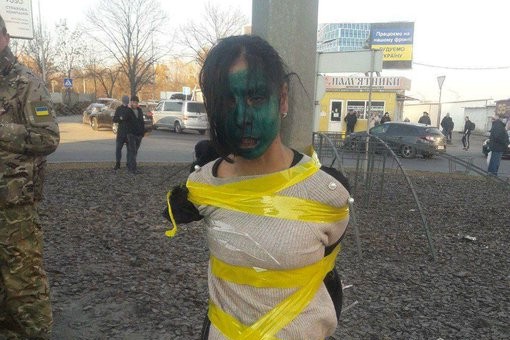 Not totally clear what is the motivation. Various claims.

Zhitomir region. Supposedly, girls, tied to the tree, are marauders, though there’s no proof.

How the hell could you excuse this? How do you have a Ukrainian flag in your bio when you don’t care about these people? pic.twitter.com/fuyAP3e5lL

VIDEO: ‘Justice’ reduced to this in the failed state once known as #Ukraine 🇺🇦 . pic.twitter.com/RmFWh99uEm #Irpin #Kiev #Kyiv #Zelensky #Russia

This is what the West and #America defend in #Ukraine: the neo-Nazis tie a father and daughter to the tree because he refused to fight against the Russians. What is the fault of that child?#Ukraina #BREAKING #UkraineRussianWar #NATO pic.twitter.com/tkZJW4Blf3

There are no nazis in Ukraine. This is Tanzania and a drawing of peace sign attached to a palm tree. pic.twitter.com/MWoV012WT5

CW: disturbing footage of people helplessly tied up and beaten in Ukraine controlled regions are circulating social media and will not be suppressed

We will be keeping an 👁 on this pic.twitter.com/MeCkrvHfKE

This video was filmed in Ukraine. The women was tied to a pole and humiliated for stealing some bread. If the Taliban did this, it would be all over the news. How come the western media are silent? Is it because they're not Muslims? #Russian #Russia #Putin #Ukraine #Biden #Kiev pic.twitter.com/MiJbSWwBCO

Street vigilantism is rife in Ukraine. People who are either looting or accused of being "Russian agent" are either tied to a pole, or worse. This is in Dubno, unclear what this person did or said. pic.twitter.com/wVgo3aY9dc

For example: The citizens in Ukraine refusing to join the Ukrainian n@zis to fight Russia are getting tied to trees and getting whipped as there punishment https://t.co/MS01jd1BjQ pic.twitter.com/xbOtFxPqZR

The Ukranians tied this individual to a pole for stealing food from a recreational centre in Ukraine. If the Taliban did this, all the liberals would be enraged, how come the west is silent over this? #Russia #Russianarmedforces #Russianarmy #Putin #Ukraine #Kiev #Biden #USA pic.twitter.com/XHXOD0aHxx

Roma people (“gypsies”) left Kiev as refugees and went to border town, Lviv, where they are facing discrimination by Ukrainians. Like here, tied to poles. A popular Ukrainian Telegram channel celebrates this action and mocks the victims.#Kyiv #Ukraine #Russia #Nazi pic.twitter.com/3cWZ9a78uA

Why are women and men tied to poles and tortured so that we see a father tied up with his child
Why are #ukrainiens doing this to their people#Russia_Ukraine_War pic.twitter.com/m5WBvxdSh8

Meanwhile, back in Ukraine, Zelensky's paramilitaries are apparently duct-taping people to trees…not so glorious. https://t.co/UCixSPUPwc pic.twitter.com/EK8OXNL7ES