MIRACLE! 69 Days and 2150 Missiles Into the War Russia Hits a Dnieper Bridge for the SECOND Time

0.1% of the missiles expended so far have gone after the most obvious and most strategic targets in the country

After 69 days of war and 2150 precision-guided missiles expended Russia has struck a bridge over the Dnieper for only the second time.

The first attack came after 57 days and 1700 missiles against a railway bridge in Zaporozhye.

12 days and 450 missiles later came a second such attack against a railway bridge 80 kilometers up the Dnieper river in Dnipro. 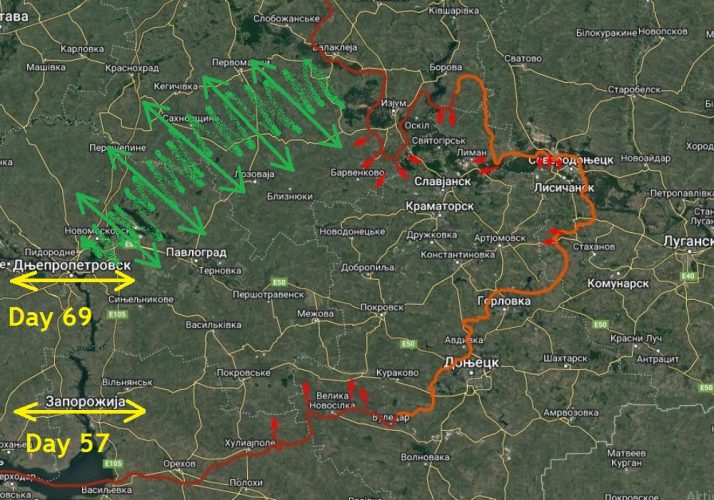 Ukrainian overland communications with Donbass (green) are difficult to interdict. However communications over the Dnieper river (yellow) could be conceivably cut completely.

Or for starters, at least the railway communications over the river.

However, so far just 0.1% of the precision-guided missiles Russia has expended in the war have gone toward this goal. 2 missiles out of 2150.

The missiles used were cruise missiles, probably Kh-59. The more powerful Iskander ballistic missiles might be better suited for the task.

Kh-59 is TV-guided which necessitates day-time attacks when bridge is at its busiest.

There is one railway bridge in Zaporozhye and two in Dnipro.

The bridge targeted today in Dnipro was constructed in 1884 under Alexander III by the renowned Russian civil engineer Nikolai Beleloubski who designed and oversaw the construction of over 100 bridges across the Russian empire.

Back then Dnipro was called Ekaterinoslav after Empress Catherine the Great.

2150 missiles is just how many were observed fired by the Americans. The likely total is even higher.

It’s a combined bridge with a road on top and railroad tracks below. The missile seems to strike the lower part so likely no one was hurt.