Memorial to Red Army Fallen in the Rzhev Slaughterhouse 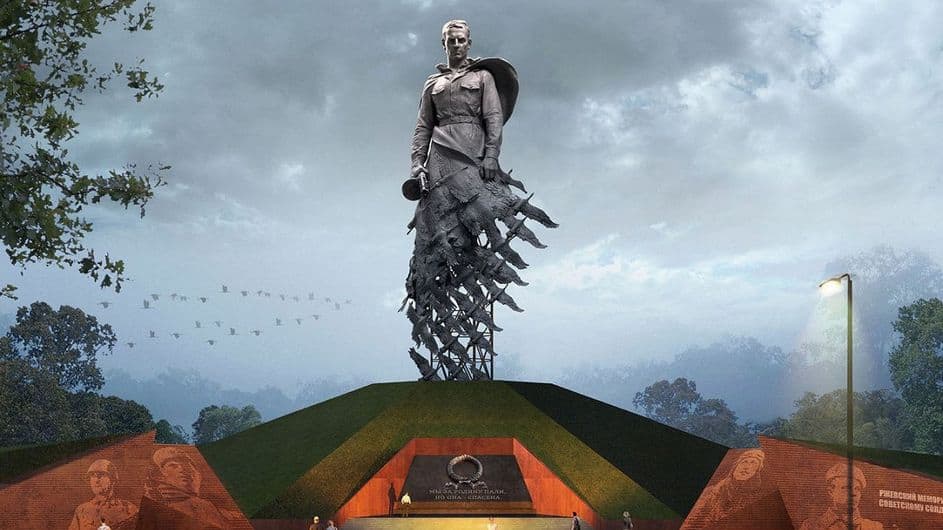 Editor’s note: In late 1942 the Red Army organized two massive counterstrokes. Operation Uranus against the Army Group South which led to the encirclement of Germans at Stalingrad, as well as the even larger (but less well-known) Operation Mars against Army Group Center which was a slaughterhouse. (When the massive offensive failed the Communist historiography rewrote it as no more than an attempt to pin the Germans down and prevent them from reinforcing their southern front, which is not true.)

At this time the Red Army was comparatively poorly led, courtesy of the destruction of the majority of its officer corps in 1941 (along with 5 million men), which in turn was caused by Stalin not placing the Red Army on a war footing, but instead allowing the Germany Army in 1941 to fall on a peace-time Red Army.

New monument to the Soviet soldiers who perished in the Battles of Rzhev (1942-43)      during the Great Patriotic War.

Putin and Lukashenko attended the opening ceremony in Rzhev yesterday.

The lower half of the statue dissipates into a flock of cranes, referencing a famous song that is based on a poem by Dagestani writer Rasul Gamzatov:

The soldier’s sad, contemplative visage is based on a composite based on the Russian Ministry of Defense’s archives that fought in the Battles of Rzhev. It stands 25 meters tall, and is armed with a PPSh-41.

It stands on a hill that is 10 meters town and supported by a framework that seems to have some Constructivist influences.

There is also a new museum complex attached to the statue.

This makes it the second major monumental construction opened up in Russia this year, following the consecration of the Warhammer 40k-redolent Cathedral of the Armed Forces a couple of weeks ago. 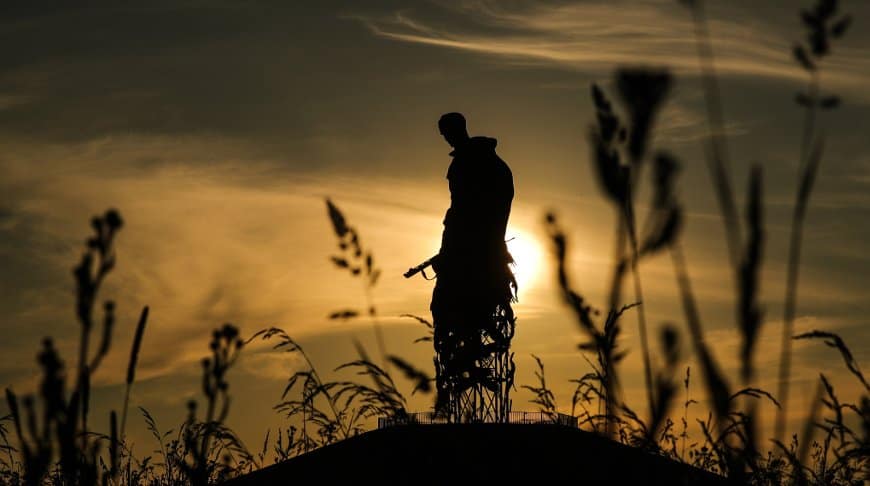 If you thought it was just Anglo libs can’t make sense of anything in the world without resorting to Harry Potter analogies, you’d be wrong. 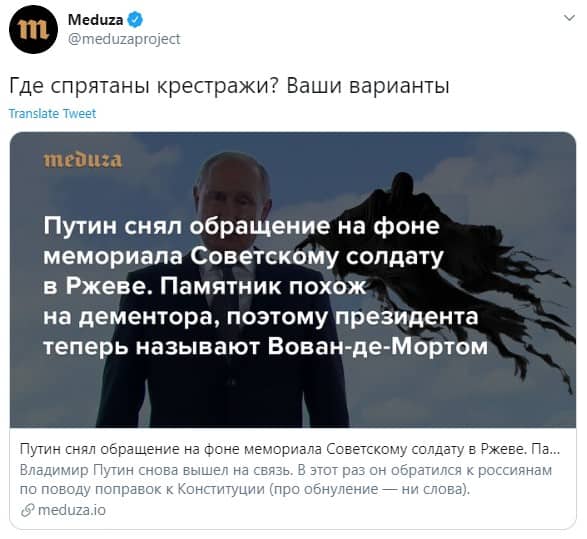 The Latvia-based, Khodorkovsky-funded opposition outlet Meduza compared the statue to a Dementor, making Putin into “Vovan-de-Mort” (Voldemort. Get it? Haha) by extension. The accompanying Tweet asked where the Horcruxes are hidden.

As they say: Read. Another. Book.

This is actually especially important now, since I’m not sure Russian libs have yet got the memo that J.K. Rowling has been canceled on account of being a terf.

Make sure you use the best HTML CSS JavaScript tools to get the perfect code. 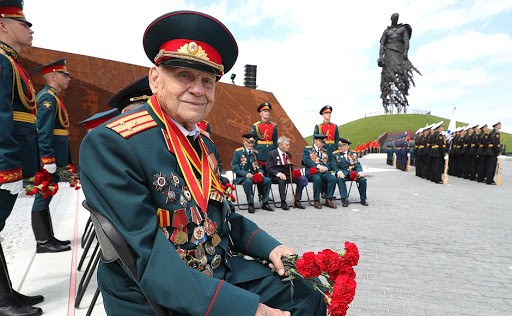 The opening of the Rzhev Monument to the Soviet Soldier, which took place with the participation of presidents of Belarus and Russia Aleksandr Lukashenko and Vladimir Putin on 30 June, is a landmark event not only for Russians but also for Belarusians, Belarusian Ambassador to Russia Vladimir Semashko told BelTA.

According to the latest data, the Soviet army lost 1.400 million soldiers in the battles near Rzhev. [Nontheless this is an exaggeration. The real number for the 15-month long series of battles is closer to 400,000 which is gruesome enough. ] “There were a lot of Belarusians among them,” said Vladimir Semashko. “Many Belarusians retreated together with the Red Army troops. Together they defeated the Germans near Moscow, participated in the battles near Rzhev where from January 1942 to March 1943 the Red Army conducted both defensive and offensive operations to deter the Nazis from a new offensive on Moscow, on the one hand, and on the other – to pull their forces and assets from the southern direction. Belarusians participated in all operations and on all fronts,” the ambassador noted.

The Belarusian ambassador to Russia stressed that the idea to build a memorial near Rzhev was largely a joint one. “We participated in it financially, through the funds designated by the Union State,” he said.

The memorial complex in memory of all the soldiers of the Great Patriotic War was erected on the site of bloody battles near Rzhev in Tver Oblast, 210km away from Moscow near Novorizhsky Highway. The bronze sculpture is 25 meters high and is set on a 10-meter hill.

The authors of the project were sculptor Andrei Korobtsov and architect Konstantin Fomin. They won the open international competition among almost 30 applicants.

The memorial has been built on the initiative of the Great Patriotic War veterans. The idea was supported by the presidents of Belarus and Russia, Aleksandr Lukashenko and Vladimir Putin. The project was implemented by the Russian Military Historical Society with the support of the Union State. Its total value was RUB650 million. The Union State has earmarked RUB200 million. The rest of the funds were people’s donations.

Donations came not only from Russia but also from Belarus and Kazakhstan. Photos of front-line soldiers who fought in the Rzhev-Vyazma direction were collected. More than 2,000 families from the CIS countries sent photos and stories about the combat path of their family members. The collected materials will be contributed to the museum of the Rzhev memorial.

Construction of the memorial was completed in April, as it was originally planned. The dedication ceremony was scheduled for 9 May – the 75th anniversary of the Victory in the Great Patriotic War. However, due to the difficult epidemiological situation in Russia, the ceremony was postponed to a later date. 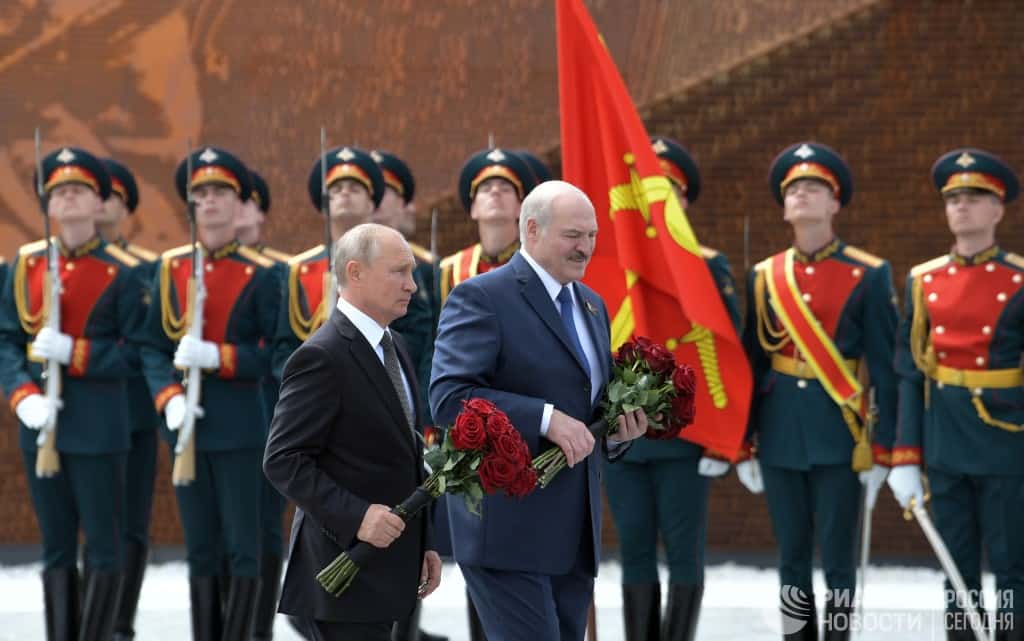 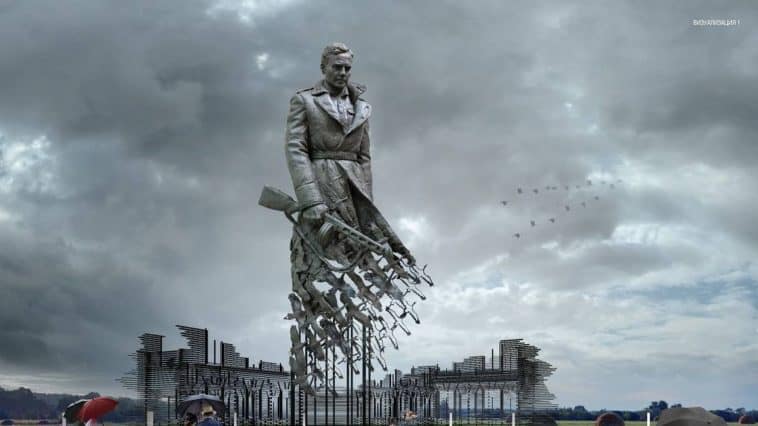 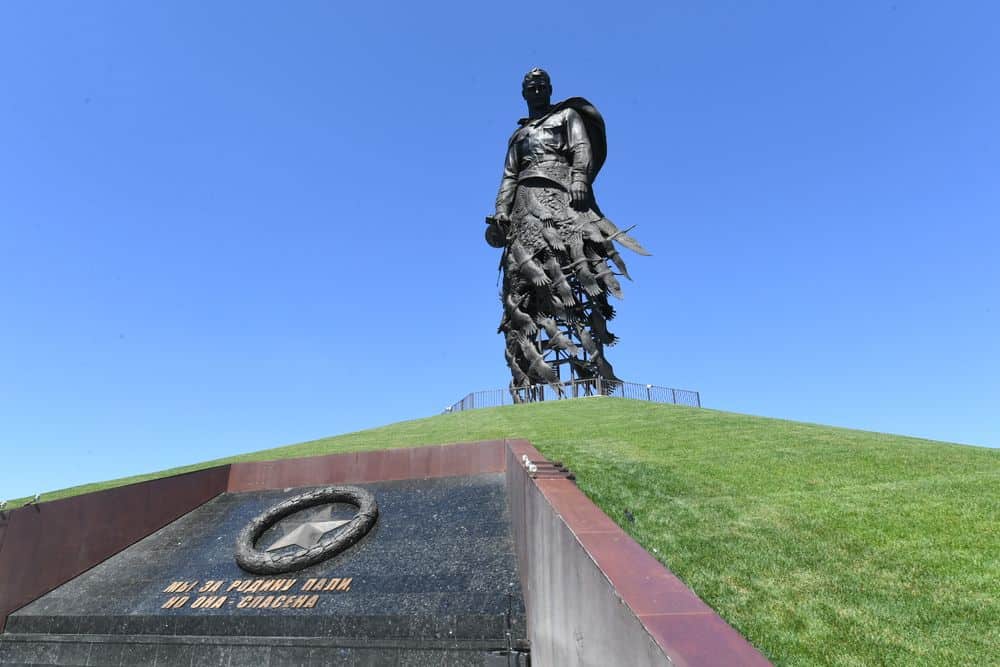 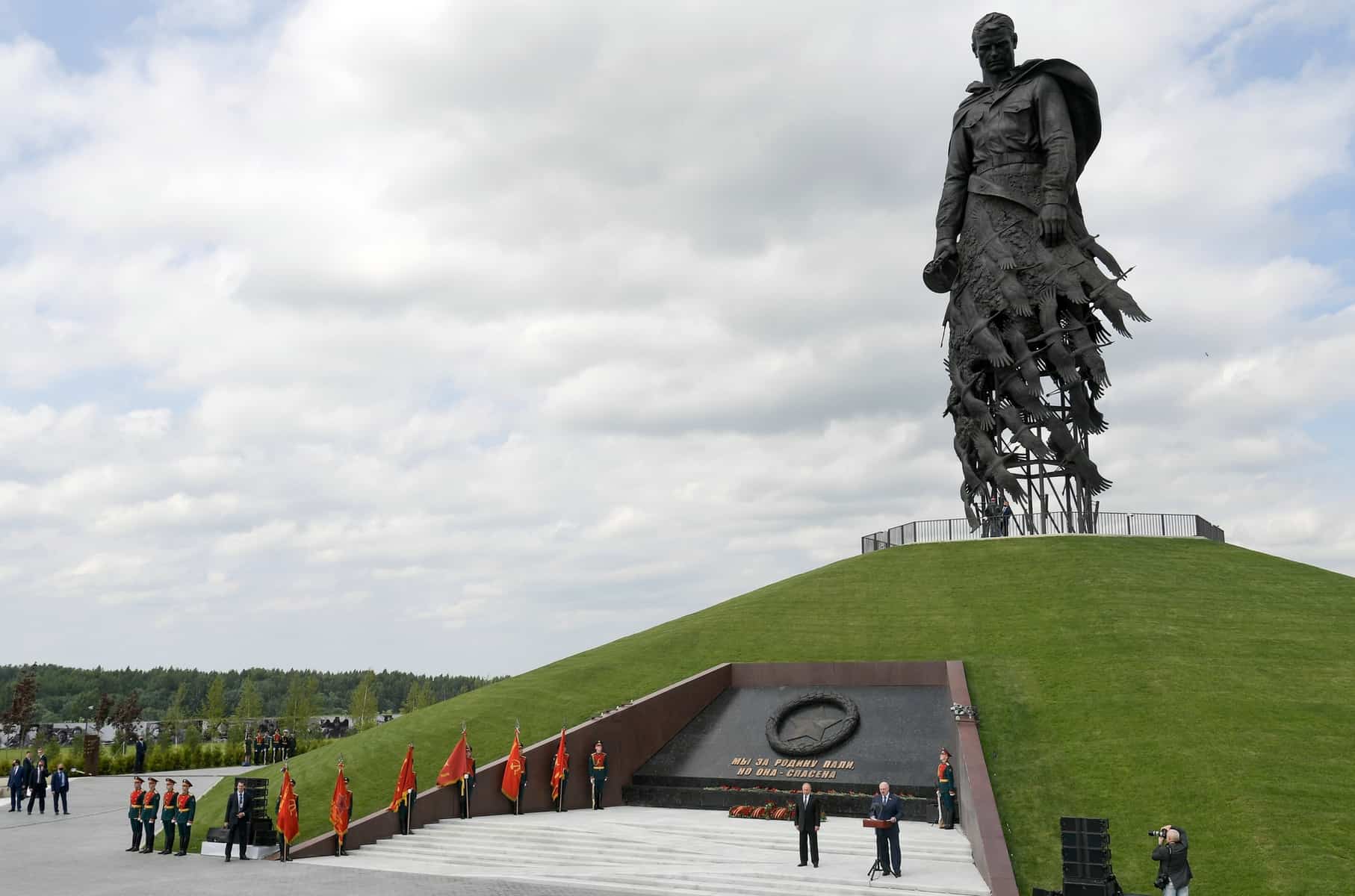 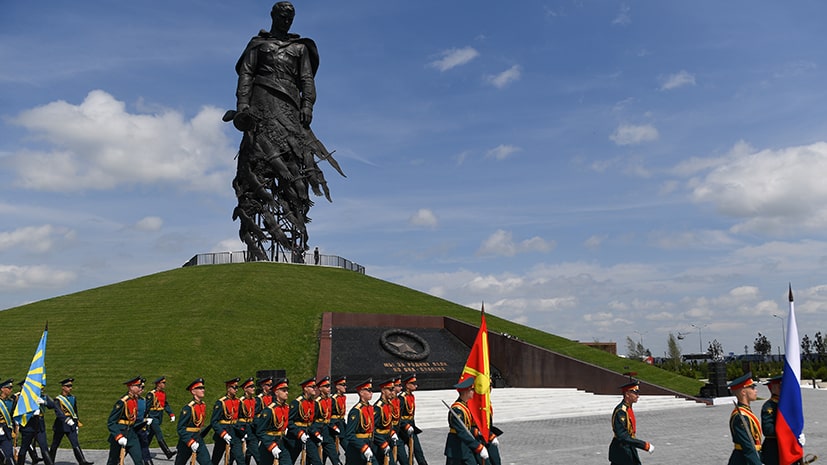 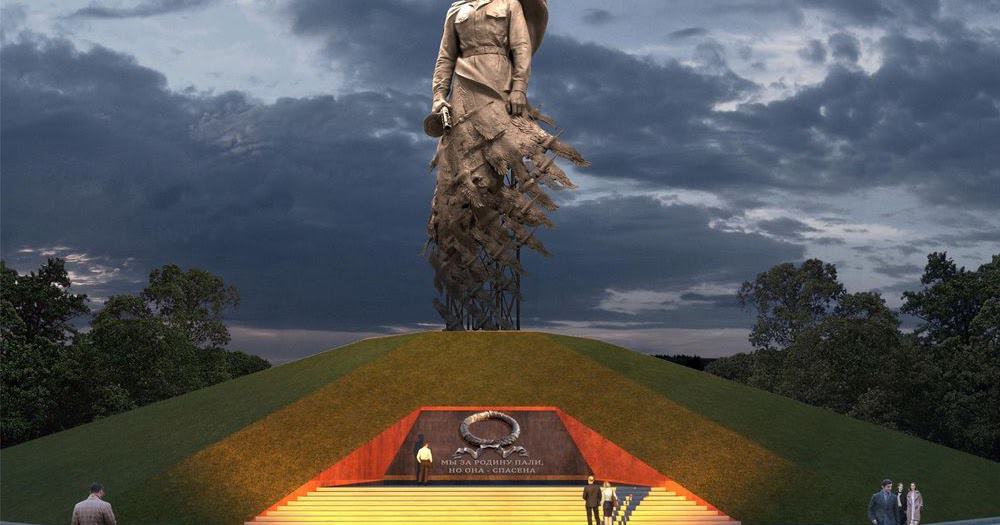