Meet Hermann Gräf, the WEF-Approved Manager of All the Russians

It’s a proven fact that economic conferences are massive snooze-fests where nothing of consequence is said or done; the “real talk” occurs in dimly lit rooms where central bankers and corporate monopolists smoke their sour apple vapes as they plot the global enslavement of every living creature and grain of sand. That’s just how it is.

The only exception to this law of nature occurred at the 2012 Saint Petersburg International Economic Forum, when Sberbank CEO Herman Gref decided to liven up the conversation with a bit of ancient occult wisdom. Gref—who a year earlier was elected to the World Economic Forum’s Board of Trustees—moderated a panel discussion at the annual conference titled: “Way Out from the Management Dead-End: Wisdom of the Crowd or the Authoritarian Genius?”

The conversation quickly spiraled into stale clichés and boilerplate soliloquies about “crowdsourcing the future” and yadda yadda. Gref decided to intervene.

“You are saying terrible things,” he chided the panelists. “You are proposing to transfer power into the hands of the population… If each person can participate directly in management, then what are we managing?”

Citing the teachings of Confucius and Kabbalah mysticism, he reminded everyone of the millennia-old tradition of shielding the truth from the untrustworthy masses.

“People don’t want to be manipulated when they have knowledge. What does it mean to remove the veil from the eyes of millions of people and make them self-sufficient? How do you manage them? Any mass control implies an element of manipulation,” Gref observed.

His performance was something of a scandal. The Sberbank CEO later insisted his provocative remarks were designed to stimulate debate, adding that he “laughed heartily” when he learned so many people had taken his “jokes” literally.

Okay, maybe. But a decade later, Hermann Gräf (as he’s known in his mother tongue), an ethnic German born in exile in Kazakhstan, is the indisputable Manager of the Russians. What the heck happened, here?

On February 27, 2020, Gref revealed he was ready to provide grants to Russian scientific institutions to help develop drugs to fight COVID-19. It was a curiously timed offer: a day earlier, the Russian government announced that five COVID vaccine prototypes were in the “initial stage of work.”

Sberbank played a key role in the genesis of Sputnik V. According to Gref, the company was “included in the work on the creation of a vaccine”—what later became Russia’s flagship COVID shot—and helped “to ensure the transfer of technology to production sites.”

“When scientists needed funds, we provided charitable assistance. In general, we have invested about 1 billion rubles ($13.5 million),” the CEO explained in an April interview with RBC.

In May 2020, Sberbank registered a subsidiary, Immunotechnology LLC, which was specifically created as a “project office to support the production of a vaccine against the new coronavirus.”

A “secret government order” reportedly issued by Prime Minister Mikhail Mishustin in December 2020 designated Immunotechnology as the sole supplier of Sputnik V to Russia’s regions. The Sberbank subsidiary shipped the first 9 million doses of the vaccine before transferring supply and delivery logistics to state conglomerate Rostec in March of this year.

Gref’s bank practically adopted Sputnik V as one of its own products. Sberbank employees were urged in May 2020 to participate in the drug’s earliest phases of testing, and the company later launched a marketing campaign aimed at convincing Russians that “normal life” wasn’t possible without the vaccine.

The bank even released a video—featuring introspective piano music and poetic one-liners that tug at your heartstrings—called: “SberVaccination: IT’S TIME!”

A month before Russia’s nationwide inoculation drive began in January, Gref stressed that vaccination would be “absolutely voluntary” for Sberbank’s 300,000 workers.

It was a short-lived promise. In June, reports emerged that Sberbank’s unvaccinated employees would lose bonuses, allowances and salary increases, and would also go on vacation last; unjabbed workers were also informed they would soon be required to provide a negative PCR every three days at their own expense.

In terms of vaccination status, Gref is certainly leading by example: the Sberbank chief is one of Sputnik V’s earliest disciples.

In December 2020, Gref revealed he was among the first to be injected with Sputnik V. He later claimed the vaccine likely “saved his life” during a business trip.

The head of Russia’s largest bank claims he got the shot sometime in April 2020—meaning he was likely part of controversial “informal trials” in which Gamaleya Center scientists injected themselves and family members with the experimental drug. “Formal” Phase I testing began on June 18. One can only applaud Gref for risking his life for the greater good. After all, there was no way for him to know—as we do now—that Sputnik V is 10,000% safe and effective.

Gref has repeatedly insisted his involvement in Sputnik’s development and rollout was entirely altruistic and cannot even be considered “business” in the traditional sense of the word.

“It was a request from the [Russian] government to help in the role of project management, because a vaccine had never been created in such a time frame,” the CEO said in April.

Not a bank—but a universe

Sberbank made a big announcement on September 24, 2020: please stop calling us a bank. We have new pronouns.

Reborn as “Sber,” the company was now “a whole universe of services for human life and businesses, which helps us accomplish our mission”:

Only yesterday Sber was just a bank, while today we’re becoming an assistant helping people deal with their vital tasks. Every day. And that is why our widely known motto “Sber. Always there for you!” is relevant more than ever.

What does this “universe of services” entail for the average Ivan just trying to quietly live his life in Herman Gref’s Russia?

In July 2020, Sberbank and Visa announced the two companies would begin testing a “biometric solution” for making payments. The technology would allow guests at designated cafes across Moscow to “pay bills by simply looking into the camera at a payment terminal.”

Nine months later, Sberbank said it would introduce its facial-recognition payments system in 100 supermarkets in Moscow and Krasnodar. As Reuters reported at the time:

Sberbank CEO Herman Gref told the RBC daily on Thursday that the “mind-boggling services” made possible by sharing biometric data would convince people to let companies access their personal data.

According to experts, pay-by-face can save up to 10 seconds per transaction. This is critical because what if you find yourself in a situation where you need to buy a bagel in under 15 seconds or else the whole world explodes?

Curiously, Sberbank prioritized the development of its biometric data systems just as coronavirus began to spread around the world.

Gref notified the Russian government in late February 2020 about the bank’s plan to create a “masked face recognition technology,” adding that the company was “trying to understand what our colleagues in China are doing” in order to find a “solution” to masked faces that escape algorithmic detection. The initiative was announced a week after Moscow Mayor Sergey Sobyanin revealed compliance with coronavirus quarantine in the Russian capital was being monitored using automated facial recognition.

Success in this endeavor came quickly. In May, Sberbank signaled it was ready to install video surveillance systems in Russian schools and universities that would be capable of recognizing masked faces. The device would also measure a person’s temperature.

“If the temperature turns out to be high, or the camera does not recognize the child, he will not be able to pass through the turnstile,” Kommersant reported, citing Gref’s comments on the new technology.

Actually, the technology can hardly be called “new”: Russia began experimenting with biometric school ID systems several years ago. In 2019, the ministry of education said that all Russian schools will have facial recognition systems by 2024.

Moscow authorities recently announced they plan to introduce the technology in city schools by the end of 2022.

Just now—literally as we are typing these words—the city of Voronezh unveiled a new partnership with VisionLabs, part of the Sberbank ecosystem. VisionLabs has been tasked with installing “a metal detector frame with a thermal imaging camera” in all of the city’s schools.

“The framework not only allows you to detect potentially dangerous objects, but also to measure the temperature of everyone who enters the school contactlessly,” the local Voronezh News reported.

By the way: do you think you can escape Gref’s detection just because you are a dog? Think again:

When “Sber” went live in September 2020, Gref was asked to comment on his empire’s new-and-improved logo—a checkmark inside of a circle. He responded:

A QR tag for every Russian

As Russia’s Uniparty prepares to push through a unanimously-loathed nationwide QR-coded health ID, it’s purely coincidental that Gref, in partnership with Russia’s central bank, has been toying with a QR code-based payment system.

Actually, Sberbank has been working tirelessly to ensure every Russian has the privilege of being QR-tagged.

“SberBank clients can now download the QR code of a vaccination certificate or a previous illness using SberBank Online—without leaving home. To do this, you need to go to the SberBank Online mobile application and use the ‘COVID-19: get a QR code’ option,” reads a very helpful Sberbank press release from November.

These digital vaccine IDs will save hundreds of millions of Russian lives, despite the fact that Sputnik V does not stop COVID transmission. Notwithstanding the clear public health benefits of this new identification system, one can’t help but fantasize about how QR codes might also dovetail with Gref’s dream of releasing a “Sbercoin” crypto currency in partnership with JP Morgan, or the Bank of Russia’s plan to test-run a digital ruble next year. Did we mention Gref is a member of JP Morgan’s International Council?

Probably a few of you are thinking: “this Gref fellow sounds a bit like that other weird German, Klaus Schwab.”

Gref is an unrepentant Great Reset-er. As we mentioned earlier, he’s a member of the World Economic Forum’s board of trustees—which means exactly what you think it means.

In July 2020, Gref co-hosted a “cybersecurity” exercise with the World Economic Forum. Then he had a nice chat with Tony Blair.

Research any “issue” being used to curb-stomp humanity and you are almost certain to come across Gref’s name. In December 2020, Sberbank pledged to serve as a “key vehicle in Russia for a World Economic Forum initiative to encourage companies to take better account of risks caused by climate change in their business planning.”

So this is how it ends?

Unfortunately yes, because this internet article is already too long and it might not e-mail properly to our loyal Substack Subscribers.

What were you expecting? You want us to tell you everything will be okay? 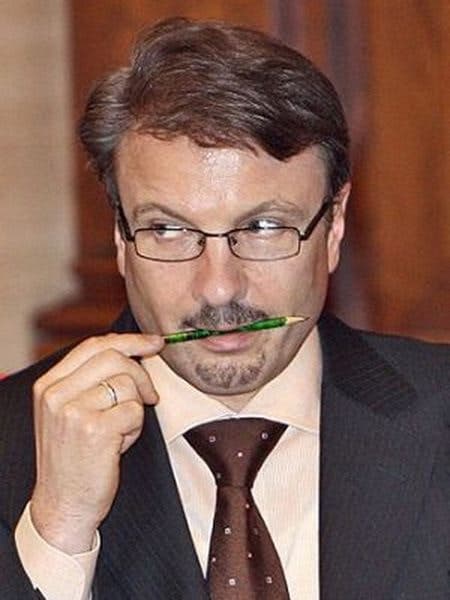 Editor’s note: Gräf was part of the liberal group with Medvedev and Kudrin that Putin brought with him from St. Petersburg where Gräf had served as the deputy governor, a position he was appointed to at just 33 years of age, only 4 years after graduating under Sobchak. He served as Putin’s econ minister from 2000 to 2007.