So much so that IPO will now rely primarily on domestic buyers encouraged by a relentless ad campaign, cheap loans, and state pressure

The bankers, gathered at Aramco’s headquarters in Dhahran, reported that global investors weren’t as bullish on the company’s initial public offering of stock as the officials had expected, said two people who were in the room and three who were briefed on the meeting. That meant Aramco appeared unlikely to reach the $2 trillion valuation wanted by Saudi Arabia’s crown prince, Mohammed bin Salman.

Instead, a banker from JPMorgan Chase, presenting on behalf of the group, explained that investors viewed Aramco as worth $1.1 trillion to $1.7 trillion.

Aramco executives, who hadn’t seen the news coming, were angry. Saudi Arabia was counting on the I.P.O. to attract foreign investment to help diversify its economy away from oil. An Aramco I.P.O. valuation reduced by forecasts of weakening global demand for oil and geopolitical jitters could hurt that effort.

On Thursday, Saudi Aramco priced the I.P.O at 32 riyals, or $8.53, a share, valuing the company at $1.7 trillion. The offering is expected to raise $25.6 billion — a fraction of the $100 billion that Prince Mohammed originally imagined. The company’s shares are set to begin trading Wednesday on Saudi’s stock exchange, known as the Tadawul.

The result was not what Saudi officials had in mind. Rather than being listed in New York or London, shares of Aramco are being sold primarily to investors in Saudi Arabia and in neighboring countries. Some of the international banks hired to underwrite the deal have instead taken on secondary roles, with the I.P.O. share sales being overseen by two Saudi banks and the British bank HSBC.

“The Aramco I.P.O. was meant to be Saudi Arabia’s debut ball to global investors,” said Karen Young, a resident scholar at the American Enterprise Institute. “Instead, it will be more of a family reunion.”

According to interviews with a dozen underwriters, strategists and others briefed on the I.P.O., who spoke on the condition of anonymity to discuss confidential negotiations, Aramco’s journey from private to public company was an unwieldy and at times fractious deal-making process. It involved 25 banks, three financial advisers, numerous Aramco company officials, at least two Saudi government committees and the crown prince himself.

The idea to sell shares in state-owned Aramco, the world’s most profitable company, which for decades has been an engine of the Saudi economy, was foundational to Prince Mohammed’s Vision 2030 plan to modernize that economy. Released in 2016, that blueprint helped vault Prince Mohammed, then the deputy crown prince, to become the heir apparent to his father, King Salman. JPMorgan, Morgan Stanley and HSBC were brought in to start the long process of preparing the company for sale to public investors.

The I.P.O. was initially proposed to take place in 2018, but then shelved amid concerns over how highly the company would be valued and where it should list its shares. That year also saw Prince Mohammed come under global condemnation after the brutal killing of Jamal Khashoggi, a Washington Post columnist, by Saudi agents in Istanbul. Western intelligence agencies linked the crown prince to the killing, but he has denied involvement.

Then, this year, plans for the I.P.O. were revived.

Over two days of meetings on Sept. 3 and 4, international banks gathered in Aramco’s London offices to pitch the company for roles on the I.P.O. underwriting team.

Many of the banks said they envisioned situations where the company could be worth $2 trillion or more, said four people who attended the meeting, another three who were briefed on it and documents reviewed by The New York Times. Bank of America’s estimates reached $2.5 trillion on the high end, these people added; JPMorgan’s drifted as low as $1.4 trillion, according to the documents and two people with knowledge of their presentation.

Around the same time, Prince Mohammed installed Yasir al-Rumayyan, a close confidant who favored the $2 trillion valuation, as Aramco chairman, replacing Khalid al-Falih, a former Aramco chief executive with an engineering background. Mr. al-Rumayyan, the powerful governor of the kingdom’s $320 billion Public Investment Fund, had discussed the plans with bank officials over the summer.

Then on Sept. 14, on its path to going public, Aramco was jarred by an aerial attack on its production facilities, blamed on Iran, that temporarily cut its oil output in half. The attack underscored the risk of operating in the Middle East, but it did not deter the march to an I.P.O.

Deal makers soon fanned out over Asia, Europe and North America to gauge interest in Aramco by Fidelity Investments, Capital Group, BlackRock and other major investors. To make Aramco more attractive, the banks persuaded it to establish an enormous investor dividend, or annual payout — $75 billion a year.

But in meetings with roughly 80 mutual funds, hedge funds and sovereign wealth funds, underwriters and investors said, potential buyers balked at the $2 trillion valuation, which struck them as too high relative to other major oil companies and in light of low oil prices, climate-change concerns and other geopolitical pressures. 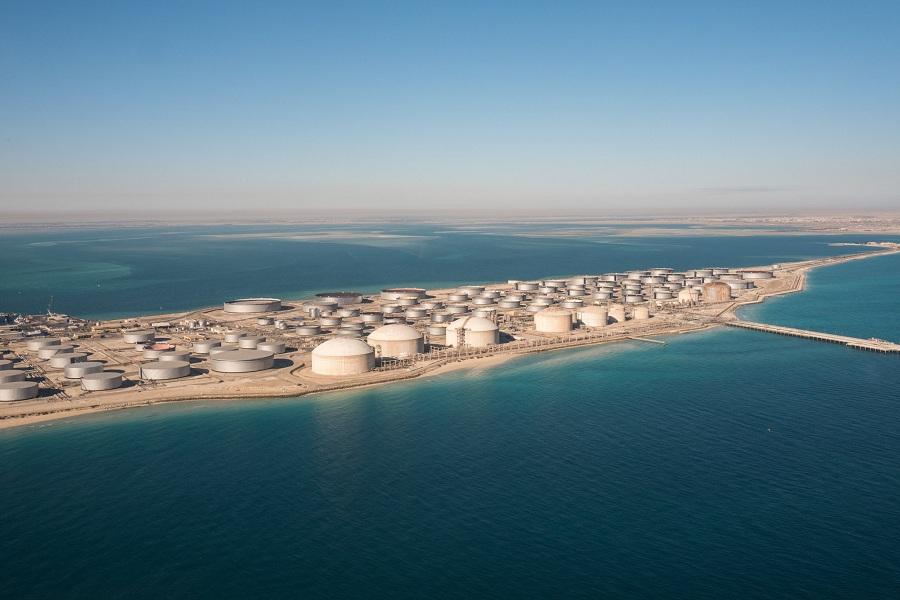 “We felt that a valuation in the range of $1.2 to $1.3 trillion would represent fair value,” or a reasonable price, “but it would need to I.P.O. at less than that to offer decent upside,” or investor profit potential, said Tal Lomnitzer, a portfolio manager at the fund company Janus Henderson who participated in the early investor discussions.

His was in some ways the typical buyer’s position at the onset of a negotiation: to argue for the lowest price in hopes of making money on the purchase if Aramco shares went up in public-market trading. But given the wide gap between views like Mr. Lomnitzer’s and the Saudi government’s $2 trillion expectations, some of the bankers were concerned.

Then came the meeting on Oct. 15 at Aramco’s headquarters in Dhahran on the kingdom’s Persian Gulf coast, and one that would follow the next day. Of all the crucial moments in the lead-up to the I.P.O., these gatherings may have been the most tense, according to four people who either attended the meetings or were briefed afterward. It was then that some of the bankers — motivated by the promise of enormous fees for evaluating the oil company’s investment potential and then selling shares to respected investors — clashed with kingdom officials and other advisers who were fixating on an increasingly elusive $2 trillion deal.

The banks, who had been sizing up investor demand for the I.P.O., delivered their findings to Amin H. Nasser, Aramco’s chief executive. Mr. Nasser was angry and taken aback by the news, said two people who were in the room and three others briefed on it later. He pointed out that some of the bankers had promised an Aramco valuation of even more than $2 trillion, and that his company had curbed spending plans and made other changes to accommodate the $75 billion dividend.

After the tense exchange, the bankers piled into cars and drove four hours across the desert to Riyadh to explain their reports, one by one, to Mr. al-Rumayyan, the Aramco chairman, said two of the people who were on the trip.

Mr. al-Rumayyan was also deeply unhappy. During the JPMorgan group’s presentation, according to four people with knowledge of the meeting, he criticized them for talking the valuation down. By the next day, Oct. 16, when the banking syndicate met to regroup, two camps had emerged: Citigroup, Goldman Sachs and Bank of America said that until they could share additional research on Aramco’s finances and hold more detailed conversations with potential buyers, they could not determine what price investors would truly be willing to pay, said three people who were part of the discussion and three who were briefed on it later.

Bankers from Morgan Stanley and JPMorgan, who had been working on the deal for years, were skeptical that investors would be willing to pay much more than they were already suggesting. The bankers argued that Saudi officials in charge of the I.P.O. should be given more details on why investors were cooler to the deal than expected. Underscoring that point, said three people who were there, was Franck Petitgas, head of Morgan Stanley’s international division, who asked how the underwriters could, in good conscience, not share the dozens of investor comments the bankers received in their initial meetings. (Through a spokesman, Mr. Petitgas declined to comment.)

Michael Klein, a New York investment banker who was hired to advise Aramco, urged the more forward-looking approach. After another meeting with the bankers, a Saudi I.P.O. committee opted to delay the deal to hold additional investor discussions.

Aramco decided to carry on and on Nov. 3 issued its formal plan to go public. Its prospectus reported enormous profit — $68 billion for the first nine months of the year. But there were also caveats: Those earnings were down 18 percent from the year before, and risk factors to investing in the I.P.O. ranged from concerns over the impact of fossil fuels to the possibility of terrorist attacks.

The banks talked with investors, but their prices didn’t fundamentally change; at meetings held Nov. 15 and Nov. 16 with Mr. al-Rumayyan in Riyadh, banks reported that foreign investors were still valuing Aramco somewhere between $1.3 trillion and $1.8 trillion, according to two people who were there.

Faced with that, the kingdom abruptly canceled a series of more formal investor meetings in Asia, Europe and North America.

It relegated most of the American banks to lesser roles and refocused on the plans for a domestic listing.

In the run-up to the I.P.O., interest in Aramco shares in Saudi Arabia appeared strong, buoyed by a substantial marketing campaign and low-interest-rate loans for stock purchases.

Hussam A. al-Saleh, a financial adviser based in Riyadh, predicted last month that most of his Saudi clients would wind up buying shares. Some of the interest stemmed from Aramco’s reputation in the kingdom as a classic stock, he said: “People believe in the company.”

And for the Saudi leadership, the pursuit of a $2 trillion valuation continues.

“It will be higher than the $2 trillion. I can bet that this will happen,” said Prince Abdulaziz bin Salman, the Saudi energy minister, who is the half brother of Prince Mohammed, speaking Friday at an OPEC news conference.

“It is the proudest day for Prince Mohammed to celebrate,” he said, referring to the offering. “We kept it to our family and friends.”