In a 53-45 vote, Senators approved the first of multiple resolutions of disapproval aimed at blocking US arms sales to Saudi Arabia, sales which President Trump had been trying to push through circumventing Congress with an emergency declaration. A second resolution passed with the exact same numbers. A final resolution encompassing the other 20 objections passed 51-45.

Trump declared the emergency in late May, intended to bypass a 30-day review period by Congress. There was no sign that any of the arms would actually be shipped within 30 days, but rather Trump just wanted to avoid Congressional votes, which had been leaning toward opposing the sales.

Debate on the floor heavily focused on the murder of Jamal Khashoggi by Saudi Arabia, and the large number of civilians being killed in the Saudi bombing of Yemen. Opponents argued that the Saudi kingdom needs these arms because of hostility toward Iran, and also argued that the new arms are so good they’d likely reduce civilian deaths.

The passage of the resolutions to block the sales are likely to set up a battle with the White House, as President Trump will almost certainly veto them. Though the votes at this point do not appear to support an override in the Senate, opposition to the Saudi arms sales seem to be growing by the day, and a successful override cannot be ruled out.

In addition to blocking sales to Saudi Arabia and the United Arab Emirates, the resolutions also mentioned related transfers to Italy, Spain, Britain, and Northern Ireland. Jordan was also mentioned, by way of the UAE intending to buy 500 missiles to give to Jordan as a gift as part of this emergency.

Talk of blocking Saudi arms sales over the Khashoggi murder has been under discussion since the October killing. The use of an emergency to try to bypass Congress seems to have given particular impetus to this round of resolutions, however, and blocking arms sales to the Saudis after today may well be the new normal, instead of the rare outlier.

hmmmmmmm…….once again have the United States of Hypocrisy surpassed itself….. 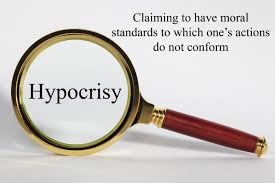