Did a Third Party Hit Saudi Tankers to Push America to War With Iran? 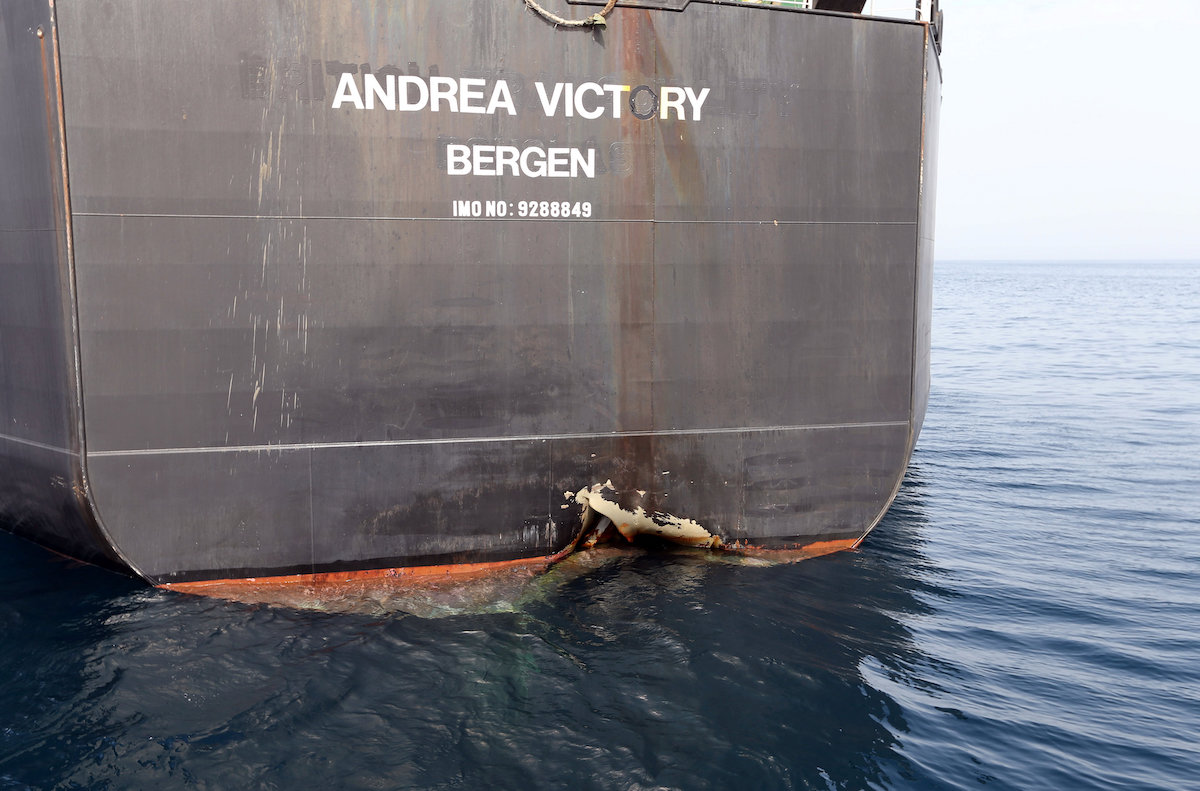 Editor’s Note: Britain’s reaction has been to says the incident highlights the danger of “a conflict happening by accident” between the US and Iran. However if ships are damaged by mines that is no accident.

Video has emerged showing damage to the Norwegian-flagged oil tanker Andrea Victory following a purported “sabotage” attack on multiple oil tankers off the coast of the United Arab Emirates.

The ship’s owner, Singapore-headquartered Thome Ship Management, has confirmed the damage, but said the ship was never in danger of sinking and the exact circumstances of the incident remain murky. All of this comes amid continues U.S. government claims that it has intelligence that Iran or its proxies could strike out at its interests in the region, or those at its allies, including targeting commercial shipping.

#BREAKING The Norwegian ship "André Victoria", which was subjected to subversive acts in the #Fujairah against four ships near the territorial waters of the #UAE, received a powerful blow that almost led her to sank, according to a video footage obtained by Russia Today pic.twitter.com/Nl15pFt81P

The clip, seen in the Tweet below, appeared online on May 13, 2019, but its origin is unclear and it is undated. The video shows a hole torn in the rear of Andrea Victory‘s hull along the waterline.

The tanker is one of four ships that UAE authorities claim suffered attacks near the Port of Fujairah, situated some 85 miles south of the strategic Strait of Hormuz, the day before. No group has claimed responsibility for the attacks, so far, and the UAE and Saudi Arabia have not accused any particular entity of having carried them out or otherwise supported the saboteurs.

“The master of MT Andrea Victory reported the crew were unharmed but there was a hole in the hull area of the aft peak tank,” Thome said in its statement. “The ship is not in any danger of sinking.”

Any ex-Navy peeps out there think this looks like a hole made by a limpet mine (or makeshift limpet mine)?

Limpet mines are not meant to sink a ship, just disable a rudder or some critical system. If this was a limpet mine they knew it wouldn't sink the ship, or leak any oil. https://t.co/fWbzSU0Wkd

There was no reportedly leak of any oil and most modern tankers have double-walled hulls specifically to help prevent this after suffering any significant damage. The aft peak tank itself is a ballast tank rather than an oil storage tank. There is still no information, or even claims, as to how the damage to Andrea Victory occurred specifically.

From the video, it certainly looks as if a mine or improvised explosive device of some kind could have been responsible, though Thome’s statement simply described whatever hit the ship as an “unknown object.” Some have suggested that divers could have placed a limpet mine on the ship’s hull. There have also been anti-ship missile attacks on military ships in the Red Sea on the other side the Arabian Peninsula and other attacks on commercial tankers in that region may have involved rocket-propelled grenades.

Saudi Arabia has also identified its tankers Amjad and Al Marzoqah as being involved in the incident near Fujairah, while the identity of the fourth ship remains unknown. Saudi Energy Minister Khalid Al Falih said the damage to his country’s two ships was “significant,” but there are no pictures or video to independently verify this claim.

Though none of the affected parties has pointed the finger at any particular actor, the incident comes amid a spike in tension between Iran and both the United States and its regional competitors, such as Saudi Arabia and the UAE, which The War Zone has been following very closely and that you can read about more here and here. On May 9, 2019, the U.S. Maritime Administration had issued an alert specifically warning about the increased potential that Iran or its proxies could launch attacks of military or commercial ships in the Persian Gulf, as well as the Red Sea and the Mandeb Strait. It is important to note that similar warnings about potential threats to commercial shipping from Iranian proxies in the region have come from U.S. and other international shipping authorities with some regularity since at least 2016.

Still, this latest combination of reported threats and warnings has fueled new speculation that Iran, or one of its many regional partners, may have been responsible for this latest incident off the coast of the UAE, though there is no hard evidence yet to support those claims. There are some parallels to a series of attacks on Saudi oil tankers in the Red Sea in 2018, which Iran-backed Houthi rebels in Yemen claimed responsibility for. A picture of the Saudi tanker Arsan after one reported attack in July 2018 showed damage to the rear hull, but above the waterline.

Why is nobody claiming that the "sabotage" of oil tankers near a UAE port is Iran-related? Maybe because In 2010 a Japanese tanker was hit by a suicide bomber very close to that same spot, and Al Qaeda's Abdullah Azzam Brigades claimed responsibility. https://t.co/PIV4noqNJw

After those attacks, reports emerged that an Iranian cargo ship, M/V Saviz, linked to the country’s powerful quasi-military Islamic Revolutionary Guard Corps, might have been actively supporting those raids and perhaps even acting as a mother ship for manned speed boats or unmmanned explosive-laden watercraft. The Saviz was already tied to weapons smuggling into Yemen to support the Houthis and the Trump Administration sanctioned it by name in November 2018.  As of January 2019, this ship was still operating in the Red Sea.

For its part, Iranian authorities have decried the Fujairah attacks as “worrisome and dreadful” and called for an investigation into the incident, which a spokesman for the country’s Foreign Ministry, Abbas Mousavi, said could “have a negative impact on maritime transportation security.”

At the same time, it’s important to note that some of the first reports about this new incident came from Lebanon-based Al Mayadeen television, an outlet reportedly funded by Iran and a cousin of Syrian dictator Bashar Al Assad, a major Iranian ally in the region. The outlet is known for taking stances supportive of Iran, the Lebanese militant group Hezbollah, which receives funding and other support from Iran, and the Assad regime.

Al Mayadeen initially reported that the attacks had set between seven and 10 oil tankers on fire and that explosions had damaged port facilities ashore, as well. Iranian media widely amplified this report, before the UAE denied these claims, countering with the statement that only four ships had suffered any damage.

Of course, this is hardly the first time there have been confusing and conflicting reports about attacks on ships in the region in which there are at least circumstantial ties to Iran. Details surrounding a Houthi attack on a UAE ship off the coast of Yemen in 2017 remain virtually non-existent and information about the exact scale of the attacks on tankers in the Red Sea last year is extremely limited.

The obvious concern now is, with tensions already rising in the region by the day, that some sort of misstep or miscalculation could lead to outright conflict between Iran and the United States, along with its allies.

The attacks near Fujairah notably come as the Nimitz-class aircraft carrier USS Abraham Lincoln and the rest of her Carrier Strike Group (CSG) are heading toward the Persian Gulf. The USS Arlington, a San Antonio-class landing platform dock amphibious ship is also heading toward the region to join the Wasp-class amphibious assault ship USS Kearsarge and other elements of her Amphibious Ready Group (ARG), including portions of the 22nd Marine Expeditionary Unit. All of these ships are likely to be on particularly high alert following these attacks on commercial oil tankers.

The UAE has asked the U.S. government for assistance in investigating the attacks near Fujairah and the Pentagon has said the United States agreed to send a team, although it is unclear if this means these individuals will be members of the U.S. military. “Experts will look at damage patterns, try to recover any material from the site, and calculate any launch point locations if they determine some kind of missile or weapon hit the ships,” according to CNN’s Barbara Starr.

Spain has announced that it’s Álvaro de Bazán-class frigate ESPS Méndez Núñez, which is sailing as part of the USS Abraham Lincoln‘s Carrier Strike Group, will not join the rest of those ships in entering the Persian Gulf. It is unclear whether or not this is a product of a risk assessment by Spanish authorities, a desire on Madrid’s part to avoid the potential of being caught in the midst of rising U.S.-Iran tensions, or some combination of both.

The Méndez Núñez will remain in the region in order to rejoin the Lincoln if and when the carrier exits the Persian Gulf to continue the rest of its scheduled cruise. The Lincoln Carrier Strike Group is supposed to conduct operations in the Indian Ocean and the Western Pacific before returning home.