Editor’s note: When asked by a Russian reporter about coronavirus in March Lukashenko answered it was better to die on your feet, than live on your knees.

In the past couple of weeks the mass demonstrations protesting the obviously falsified Belarus presidential elections became featured news reporting in Western media, edging out coverage of the Coronavirus pandemic and of street disorders in the USA following yet another shooting of some unarmed black man by white police.

In this context, I was invited twice to give Zoom interviews on both RT’s live 24 hour news broadcast from Moscow and on the Belarus state television whose local crew had interviewed me at home in the past before Covid19 drove us all into virtual reality.

Given that these Zoom interviews were put on live news programs that are not reposted on youtube.com, where you, dear Reader are more likely to catch them, and given that my observations are rather different from what the herd of both mainstream and alternative news commentators are saying, I set out here what it is I have to say about Belarus at this crucial moment in the nation’s history, when the outcome of the power struggle is by no means clear.

First, I make reference to the very special characterization of the Belarus protest movement by The Financial Times from the very beginning, namely that unlike the Maidan protesters in Ukraine in 2014, the Belarus protest movement is not pro-EU, pro-NATO and anti-Russian; it is seeking only new elections conducted under transparent and fair conditions, on the assumption that will lead to the removal of President Lukashenko.  This reporting may seem obvious, but it is remarkable in its own right.  I compare it to the latest militant and self-righteous statements coming out of the Polish government in Warsaw to the effect that the Belarus protesters are standing up against Russia.

Be that as it may, all reporting from all sides is missing the other outstanding feature that distinguishes the present day situation in Belarus from Maidan in 2014:  President Lukashenko is a vastly different personality from Ukraine’s President Yanukovich.  Yanukovich had been ousted from power once before and he knew perfectly well that the two-thirds of the country outside his power base in Russian-speaking Eastern Ukraine was ready to oust him by force. On 22 February 2014, he rather timidly accepted an EU offer of mediation with the leaders of the rebellion that promised new elections in a year’s time. As we all know, the next day the  Opposition ripped up the agreement and Yanukovich fled the country. His life was saved only by quick and skillful Russian intervention.

The outstanding feature of Mr. Lukashenko over recent days has been his hyper-activity in public and his personal courage in standing up to the protesters. He has gone to the high risk hot spots to take them on.

Lukashenko said plainly that the only way the protesters will get new elections in the days ahead will be over his dead body, and this was not empty rhetoric. He has denounced the offers of mediation coming from grandstanding Western leaders like Emmanuel Macron, deriding the hypocrisy of the man who has directed the vicious police repressions against the Gilets Jaunes protesters in his own country over the past two years.

Having tossed this bouquet to the Belarus President, I add that the problem he is facing is largely of his own making by his actions and inaction over the past 26 years in power.  The situation is so dire precisely because his regime has suppressed all political opposition, has quashed civil society for the purpose of staying in power.  To be sure, he might have justified this truculence by the good he was doing for his nation by the conservative, statist economic policies he pursued, by refusing to go along with the fads of privatization, by staying close to the country’s main export market, Russia. Indeed, over his time in power, Belarus has made impressive achievements in raising GDP and national prosperity.

Thus, when a transition committee formed in the past week claiming to speak for Belarus society and nominating itself to oversee free elections, Lukashenko could say, with justice, that they represented nobody, and he would not negotiate with them.  The calamity is that there is no one to negotiate with to resolve the crisis, which means it will be resolved only by force and/or persistence by one of the sides, and may drag on for months.

In the interviews alluded to above, I was asked to comment on Lukashenko’s calling out the risks of trouble coming from NATO along the country’s Western borders. As we know, the President used his visit to Grodno a few days ago to visit the Belarus troops that are on maneuvers there at his order.

In my view, Lukashenko’s attention to the Western borders is reasonable, but not because of any invasion threat from Polish or Lithuanian forces.  Rather, the risk is one of infiltration across that border by those carrying cash or arms for the Opposition in general and for paid professional trouble makers in particular.

Belarus television is interested in the question of possible Polish direction of the disturbances in Belarus. Surely in the public domain, Poland has made clear its support for the removal of Lukashenko.  I have no doubt this is the case.  For Polish President Duda, taking a strong stand in defense of human rights in Belarus puts his government in a favorable light within the European Institutions and distracts from Poland’s notoriety as a black sheep that is dismantling its own independent judiciary and putting in jeopardy rule of law.

Then there is the question of what Russia can and may do as the Belarus scenario unfolds one way or another. Again, from the get-go, The Financial Times took a Realist position as opposed to the ideologically colored position that so much of our media disseminate. It noted that Belarus is squarely in the sphere of Russian influence and better not to put its dominance in question.

Many of our media outlets have looked to Belarus for insights into what may be ahead for Mr. Putin’s regime. They have asked whether the kind of resistance to the Kremlin that arose in Khabarovsk after the removal and arrest of its elected leader from the LDPR party Furgal might not be spread further in Russia with encouragement from the mass protests in Belarus.

In my view such contagion is improbable, because there are fundamental differences in the way the Belarus “regime” and the Russian “regime” operate vis-à-vis their electorates and civil society more generally.  This is overlooked by so many of our media because they are willingly blind to the meaning of the Duma parties. In Russia 20% or more of the electorate belongs to the Communist Party.  Fifteen percent or more are supporters of Zhirinovsky’s nationalist LDPR.

Even Vladimir Putin showed in his answer to a journalist’s question a couple of months ago that he did not quite fathom that the LDPR is a party that exists outside the persona of Mr. Zhirinovsky and will likely continue to exist after he leaves the scene. It is not to be compared with the movements of people like Navalny or Nemtsov, who were, are nothing more than lightning rods for popular frustration, without clearly defined party policies. The Furgal affair has driven this fact home: the entire Far East has high levels of support for the LDPR for reasons which may well have to do with their policy stands, not just personal popularity of individuals.

The net result of the foregoing is that if there were to be serious abuses in elections like those in 2011 in Russia or in Belarus today, the Kremlin would easily find an Opposition to negotiate with, whereas Mr. Lukashenko finds himself at the center of a political desert that he himself created.

These, I believe, are strong reasons for Vladimir Putin to go back to his courting the Opposition parties as he did back in January during his state of the nation address to the legislature.

The ambitions of Speaker of the Duma Volodin to play dirty and to monopolize the political stage for the United Russia party works against a peaceful transfer of power in the future and so is against the national interest.

Where, exactly, is the proof that Lukashenko’s election victory was “obviously falsified”? Not innuendo, not unsupported statements, but proof? 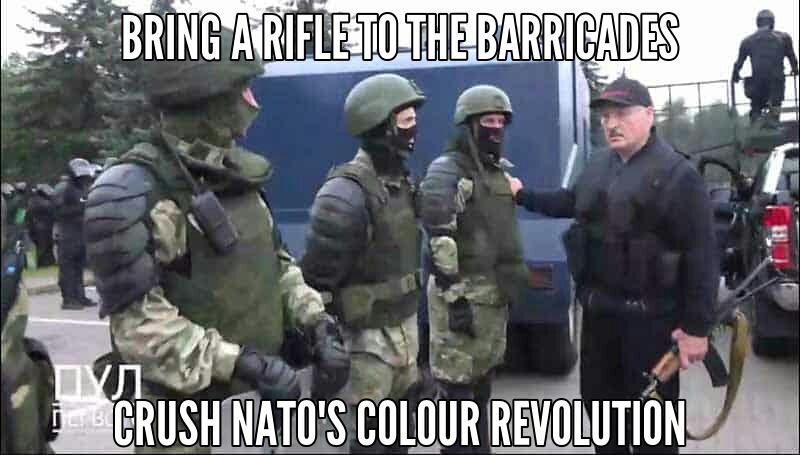 Belarus is an area of Poland and Russia.