Australia Cancels Djokovic’s Visa, Detains Him at the Airport

Novak Djokovic had his visa refused and will be deported from Australia after traveling to the country in search of his 10th Australian Open singles championship, The Age and Sydney Morning Herald first reported.

Funny stuff. The brain-disease cult is treating a healthy person in top shape as a criminal for not having undergone mRNA therapies that make you more susceptible to C flu infection. He also has exemptions approved by two blind panels. (A tennis one and a government one.)

World tennis No.1 Novak Djokovic will mount a legal challenge to the last-minute rejection of his visa, after spending eight hours in detention at Melbourne Airport unsuccessfully pleading his case to border officials overnight.

A Tennis Australia source claimed Djokovic had been targeted because of his profile, saying other players had already entered Australia with the same exemption he sought.

In comments reported by Russian news agency Sputnik, Djokovic’s father said: “I have no idea what is happening, they are holding my son in captivity for five hours.”

It seems that what happened was that Victoria (its medical board) granted him a medical exemption, but then refused to sponsor his visa:

A source familiar with the case said the federal government had written to Tennis Australia multiple times informing it that a recent COVID infection was not grounds for a vaccine exemption. This is suspected to be the basis of Djokovic’s claim for a waiver.

“ATAGI [advisors to the Feds] did not endorse the process that the Victorian Government or Tennis Australia put in place,” the senior federal source said.

The Victorian government claimed it rejected a late-night request to sponsor the world No. 1’s visa hours before he landed in Melbourne about 11.30pm.

How utterly classless of Victoria. If they weren’t going to let him in, they should have said so ahead of time, instead of clearing him, then detaining him when he actually arrived. Who’s the real criminal here?

It's understandable Australia does not want Novak to bring in the virus, and ruin their accomplisment in straightening the curve (along the wrong axis).

Recently, they branded their first neighbor PNG as a breeding ground for new variants bec. of low vacc. rates. pic.twitter.com/9PaE9VsgQI 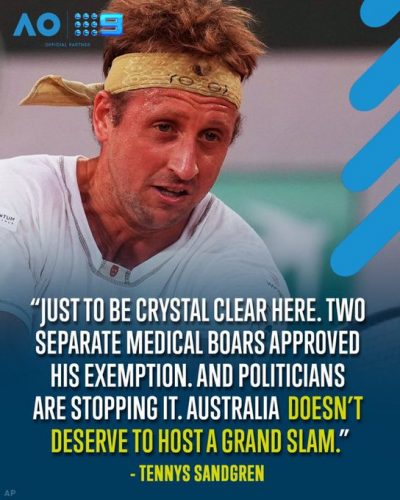 Australians losing their mind over Novak Djokovic are pathetic.
You went along with extreme lockdown measures, mandatory vaccinations imposed by your government. Direct your fury at them, not the guy who hits a ball over the net for a living.