As we await answers on who funded the plot to use a handful of mercenaries and ex-Green Berets to oust Venezuelan President Nicolás Maduro, it’s worth taking a closer look at the man behind regime change policy, the special envoy on Venezuela, Elliott Abrams.

Called the “neocon zombie” by officials at the State Department, Abrams is known as an operator who doesn’t let anything stand in his way. He has a long history of pursuing disastrous policies in government.

“Everything Abrams is doing now is the same thing he was doing during the Reagan administration. He’s very adept at manipulating the levers of power without a lot of oversight,” a former senior official at the State Department told The American Conservative. The official added that Abrams is “singularly focused” on pursuing regime change in Venezuela.

A little background on Abrams: when he served as Reagan’s assistant secretary of state for human rights, he concealed a massacre of a thousand men, women, and children by U.S.-funded death squads in El Salvador. He was also involved in the Iran Contra scandal, helping to secure covert funding for Contra rebels in Nicaragua in violation of laws passed by Congress. In 1991, he pled guilty to lying to Congress about the America’s role in those two fiascos—twice.

But then-president George H.W. Bush pardoned Abrams. He went on to support “measures to scuttle the Latin American peace process launched by the Costa Rican president, Óscar Arias” and use “the agency’s money to unseat the Sandinistas in Nicaragua’s 1990 general elections,” according to Brian D’Haeseleer.

Abrams was initially blocked from joining the Trump administration on account of a Never Trump op-ed he’d penned. But Secretary of State Mike Pompeo succeeded in bringing him onboard last year, despite his history of support for disastrous regime change policies.

It’s no surprise that with Abrams at the helm, U.S. rhetoric and actions towards Venezuela are constantly “escalating,” Dr. Alejandro Velasco, associate professor of Modern Latin America at New York University, said an interview with TAC.

In just the last month, Washington has placed bounties on the heads of President Nicolás Maduro and a dozen current and former Venezuelan officials. The U.S. also deployed the largest fleet ever to the Southern Hemisphere.

Meanwhile, Abrams announced the “Democratic Transition Framework for Venezuela,” which calls on Maduro’s government to embrace a power-sharing deal. [Kinda like if Maduro came up with a ‘transition plan’ for Trump to start handing over power to the Green Party.] The plan doesn’t explain how Venezuelan leaders with bounties on their heads are supposed to come to the table and negotiate with Juan Guaido, whom the U.S. recognizes as Venezuela’s legitimate leader. Abrams has also said that the U.S. does not support a coup.

A few days after recommending a power-sharing arrangement, and 18 years after the U.S. backed a putsch against Hugo Chavez, Abrams warned that if Maduro resisted the organization of a “transitional government,” his departure would be far more “dangerous and abrupt.” To many, Abrams’ aggressive rhetoric against Maduro made it sound like the U.S. was “effectively threatening him with another assassination attempt,” like the one Washington had “tacitly supported” in 2018.

Two weeks after Abrams’ warning, Operation Gideon began. Jordan Goudreau, an American citizen, former Green Beret, and three-time Bronze Star recipient for bravery in Iraq and Afghanistan, along with Javier Nieto, a retired Venezuelan military captain, posted a video from an undisclosed location saying they had launched an attack that was meant to begin a rebellion that would lead to Maduro’s arrest and the installation of Juan Guaido.

In a public relations coup for Maduro, the plot was quickly foiled. Given that American citizens were involved and have produced a contract allegedly signed by Guaido, the incident has severely harmed the reputations of both the U.S. and the Venezuelan opposition.

Both President Trump and Pompeo have denied that the U.S. had any “direct” involvement with Goudreau’s plot.

However, the Trump administration has given billions of dollars from USAID to Venezuela, and that money is largely untraceable due to concerns about outing supporters of Guaido.

“With all the cash and arms sloshing around in Venezuela,” it is not hard to imagine how U.S. funding could inadvertently wind up supporting something like this, said Velasco.

There are other signs that the U.S. may have been more involved in the plot than they are saying publicly.

For one, American mercenaries don’t carry passports identifying themselves as American nor do they return to the U.S. where they can be brought up on charges for their work, said Sean McFate, professor of war and strategy at Georgetown University’s School of Foreign Service and the National Defense University.

In order to sell weapons or training to another nation, it is necessary to receive permission from the State Department. It’s unclear whether Goudreau and his band did so. But Goudreau’s social media posts look like a pretty “clear cut” violation of the International Convention Against the Recruitment, Financing and Training of Mercenaries and the U.S. International Traffic in Arms Regulation (ITAR) said Peter Singer, a senior fellow at New America.

We know that months before the fated coup, the CIA met with Goudreau in Jamaica and allegedly warned him off the project. According to the AP, Goudreau is now under investigation for arms trafficking. Members of Congress have asked the State Department what they knew of Goudreau’s plans. Given the illegal nature of the supposedly unauthorized project, it’s very strange that the ringleader is at present in Florida, talking to the press and posting on social media.

Besides that warning, it seems no one in government tried to stop this calamitous operation.

And it’s not just regime change. Last year, Abrams advocated granting special immigration status for the 70,000 Venezuelans residing illegally in the U.S. as a way to “pressure Maduro” even though Trump ran on the promise to severely limit the number of people granted Temporary Protected Status.

It was in pursuit of special status for Venezuelans that Abrams showed himself to be “incredibly pompous, bull-headed, and willing to destroy anyone who opposes him, in a personal way, including by trashing their reputations in the media,” another senior State Department official told TAC.

Abrams is not above hiding policy options he doesn’t like and offering only those he favors to Pompeo to present to Trump, sources said.

Abrams ultimately prevailed and Venezuelans received refugee status from the Trump administration, despite the fact that it betrayed Trump’s campaign promises.

According to Velasco, there are some people in the administration who believe that Venezuelans are the “new Cubans”—that they will become a solid, loyal Republican vote in the swing state of Florida if they’re granted special status. They also believe that Venezuelan expats want to see the U.S. remove Maduro. There are “many Cold Warriors” who believe all it will take is a “little push” for Venezuelans to rise up and take out Maduro, said Velasco.

The State Department did not respond to a request for comment on whether Abrams is pursuing a military confrontation in Venezuela.

“Cold Warrior” beliefs are dangerous. While “Operation Gideon” was especially clownish, had it been more sophisticated, it could have easily sparked a world war. The Russians, Iranians, and Chinese are all operating in Venezuela.

That specter is even more concerning now that Russia’s Foreign Minister Lavrov has said that Russian special services are on standby to help Venezuela’s investigation of the mercenaries.

The Elliott Abrams Classic Moment In Idiocy for me was his contention that President Guaido’s temporary term – remember, he was going to become ‘interim president’ for 60 days or something like that, until they could hold new elections, but somebody pointed out that going from the time The Whole World recognized him as the real president, his term was going to run out before he could get anything done – would only become effective ‘as soon as Maduro steps down’.

Well, then…what is he now, Elliott? Why is everyone in western politics referring to him as ‘The President’ if he doesn’t actually become the president until Maduro steps down?

He’s toast now, anyway – Venezuelans will never accept him as ‘a man of the people’ when he has to constantly rely on help from the Americans to do the least little thing, and this is far from the first time he has tried some kack-handed abortion of a plan and Washington has backed him up.

My money is on Carlos Vecchio as The Next Big Thing in Washington.

Do these satanic f-ckers ever die?

Cheney found someone who could replace all body parts or had some kind of elixir and the rest of them are using whatever it is. I think they tried it with Reagan and it failed but now they’ve improved whatever it is.

Ritual murder of Christian infants and children. It’s partly why the Pharoah drove them out of Egypt, that’s how long they’ve been doing it. 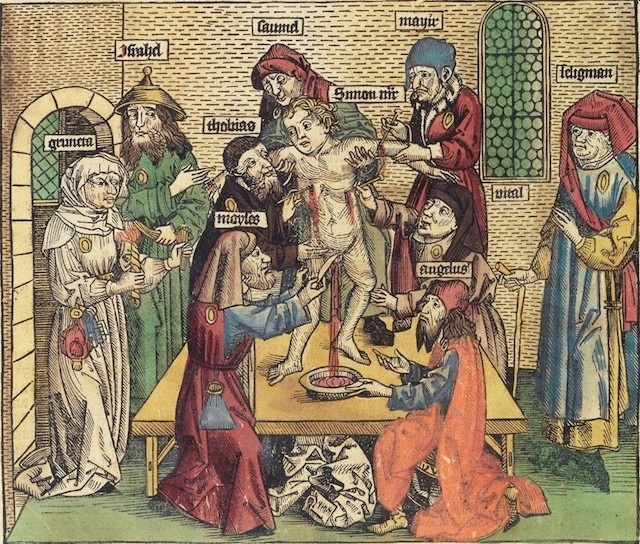 It may be past time to reconsider the assumption that selling one’s soul to Satan in exchange for worldly power and immortality is merely a superstition or ancient myth.