You Have Witnessed the Awesome Power of the Media. Now Fight It

Never have so many people been so humiliated all at once

Covid isn’t spread by asymptomatics (ie it can happen but that’s not a major infection vector), isn’t spread by children, isn’t spread outdoors, can not survive outdoors, up to 80% were not susceptible to start with — either because of T-cell immunity or because of behavioral/social reasons — and has a 0.0325% fatality rate (according to CDC) for the under 50s if you do catch it…and this is the “threat” a police state was unleashed on 3 billion people to supposedly counter.

This has been the stupidest thing humanity has ever done, a Xhosa Cattle-Killing Movement but on a global scale and correspondingly costlier. A man-made disaster on the scale not seen since Mao’s Great Leap Forward and the Year Zero of the Khmer Rouge.

And how did we get there? Largely due to the media. The media ⁠— amplified by social media busybodies ⁠— created a sense of mass anxiety and then postured as its solution by hysterically demanding the costliest security theater ever seen.

Lockdowns can not be understood as a policy addressing a problem in the physical world. To enact such sweeping, historically unprecedented measures with so little reason to believe that what was coming was so uniquely new was pure unadulterated madness.

There was no attention paid to cost whatsoever. Instead, in waves additional measures were being passed on top of existing ones, adding enormous extra costs for very little additional gain — because it was never about combating the virus, but about alleviating the sense of panic. A sense of panic which ironically for the silent majority was not kicked up by the media but only by the first government measures.

It is only as a policy addressing the emotional state of the doomsday cultists and those under their spell that lockdowns make sense. Seen in such terms lockdowns were a runaway success.

Sure enough, hundreds of thousands, perhaps millions, of people who would have otherwise lived have been sentenced by lockdowns to cancer, despair, malaria, malnutrition, tuberculosis, and measles deaths that would have otherwise not have happened — however that is a trifle from the material world.

From the point of the emotional world — which is the only one that matters to hysterics — their sense of anxiety and fear was alleviated. And their life was even filled, for a time, with a sense of purpose, virtue, heroism, adventure, and belonging to something greater than themselves. And so the price in lives of other people was worth it. Particularly since it was not highlighted by the media and was not allowed to burst their bubble.

I will get into how this is exactly what fuels many wars of the Empire, particularly its liberal “humanitarian” wars at another time.

For now, let it be said the combination of media thirst for the sensational and the human hunger for an emotional thrill of a moral crusade is a lethal one.

As terrifying as the idea of a once-in-a-century killer virus was, for many there was also something alluring about it.

It was a chance to experience dread — something many people will pay decent money to cinemas and “haunted houses”. But more than that it was a chance to have a shared experience. To feel as if “we’re all in this together” and sacrificing for each other. To plug into our hive mind and experience the delirium that comes with it that is normally unleashed only in wars and big sporting events. 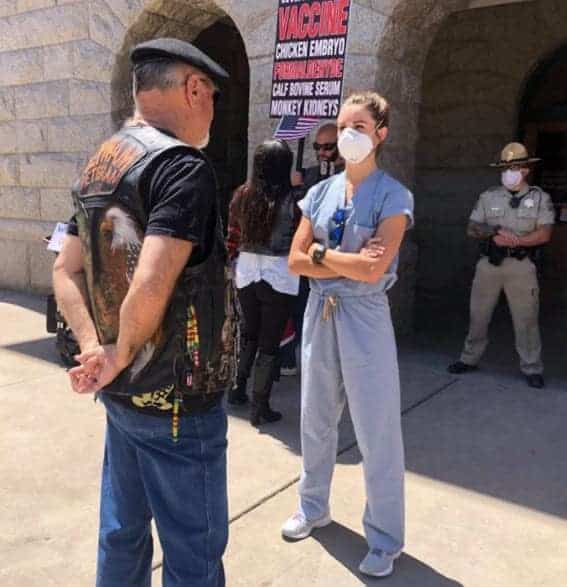 And so the totally disproportionate fear of the virus, and the longing for a wholly unnecessary joint adventure, combined into righteous wrath against the naysayers. The doubters who refused to let go of their senses, and to bow down to the mob. Not because they were selfish, but because they saw through the stupidity of inflicting enormous real-world damage for the sake of stimulating one’s dopamine and adrenaline glands.

There is no better proof that this was the real driver of the hysteria than the manner in which it jumped the shark. As soon as the media offered up a new, fresher dopamine thrill candidate, the hormone junkies jumped on the next collective hysteria:

“The media giveth, and the media taketh away. … From day one, the coronavirus response was a display of the tail wagging the dog – the media driving the scientific and medical community, not the other way around.”

“This is why the minute the media found a more exciting narrativeto advance their agenda, namely racial strife, not only is the virus is out of the news entirely, but the cult-like devotion to quarantine, wearing masks, and the mind-numbing trope of “social distancing” has been repudiated within hours of the first sacred “protesters” smashing and burning storefronts in Minneapolis last week.”

The media keeps offering up possible issues for the crusading-inclined to work itself into a frenzy over, and the mass keeps sampling the buffet and reacting to them.

Some take, most don’t. But ultimately at least a few will take and will snowball. Nobody knows which ones — the mob is in control of that. But whoever is in control of what the media puts on the mob’s sampling menu to a certain extent controls the mob.

Yesterday the dopamine junkies demanded and received a totalitarian nanny state. Today they are kneeling, prostrating themselves in front of other people, smashing up shops, and demanding to dismantle the police they just yesterday were siccing on their neighbors. Tomorrow, as so many times in the past, they may demand a foreign war. Something to allow themselves to imagine they’re re-enacting WWII and taking down Hitler. Not all of them, but enough of them to make it happen.

They don’t know what they’re doing. But their minders do. Those we must fight.

Anti-Empire is in the midst of a funding drive to preserve itself for another quarter. If you like the site, support its message, or would miss it if it was gone please consider helping out.