The way they're laying down ships — missiles will be child's play 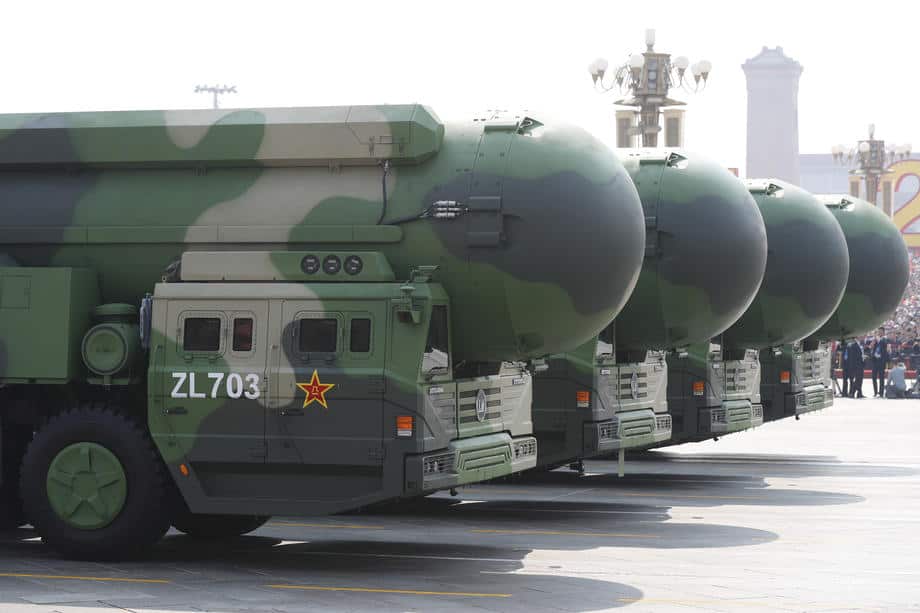 Editor’s note: Washington’s idea is that it can spam intermediate missiles on East Asian islands that mean nothing to Americans, to target the heavily-populated and infrastructure-laden Chinese mainland. I doubt that is a proposition the Chinese will accept without a symmetrical answer of their own.

Washington has gotten ever more hysterical about China, betraying not a small crisis of self-confidence. Concerns from a decade ago about intellectual property, excessive carbon emissions, and Beijing’s military purchases from Russia have morphed into the “total” trade war in pursuit of “decoupling.” Moreover, these concerns have resulted in a wave of arrests of Chinese living in the United States, the closure of Confucius Institutes at universities across the country, and serious anxiety lest Chinese missiles put holes through a U.S. Navy flattop. True, few if any American strategists anticipated Beijing’s brazen moves in the South China Sea to build out new reef bases during 2014–16, but let’s recall that move came a few years after the much-heralded 2011 Obama announcement of the American pivot to the Asia-Pacific.

Now, as China’s shipyards turn out advanced destroyers “like sausages,” the U.S. military finds itself on the back foot. Allies are increasingly skittish across the region, and the president of the Philippines has taken to mocking America’s will to confront China directly, while Manila meanwhile pursues a robust engagement with Beijing. Meanwhile, the situations in Xinjiang and Hong Kong have piqued journalistic interest to the point that these twin “crises” have the collective impact of pouring gasoline on what was already a hot blaze in U.S.-China relations. A real crisis actually looms with respect to Taiwan, moreover. And now, even the North Atlantic Treaty Organization (NATO) is apparently pivoting to confront the supposed threat from the Middle Kingdom. Will Montenegro, America’s newest ally in NATO, save America amidst the intensifying rivalry with China? Perhaps not.

Fortunately, some “wise men” have capably stepped into the breach to apply some much needed common sense. Yet disturbingly, the younger generation of American strategists—the new “whiz kids”—who never lived through the trials of the Berlin and Cuba emergencies or the agonizing pain of the Vietnam debacle, regrettably seem all too content to feed the flames of the New Cold War.

In fact, at some point in the last few years, it became quite normal or even “in vogue” to talk openly inside the Beltway about war with China—not cyberwar or trade war, but real war with lots of corpses. Even as many of the major Washington think tanks have jumped on this gravy train, each of the armed services has also joined the feast. In the case of “archipelagic defense,” promoted by the venerated Center for Strategic and Budgetary Assessment (CSBA), this new strategy combines in interesting ways with the U.S. Army’s search for a mission in the Indo-Pacific. The result is a strategy to “level the playing field” by introducing ground-based intermediate-range missiles across the Asia-Pacific.

It is important to consider how this strategy looks from the other side of the Pacific, as when a detailed analysis appeared in a prominent Chinese defense publication (Aug 2019 edition) under the headline: “U.S. Ground Forces Plan to Rebuild Intermediate-range Missile Strike System [美陆重建中导打击体系设想].”

The lengthy Chinese article features seven color slides from the CSBA report that are all variations on the theme “illustration of U.S. ground-launched intermediate-range missile intended attacks on Chinese targets [美国陆基中导对中国目标打击示意图].” The Chinese article presents a reasonably objective summary, explaining that seen from the American perspective, “China and Russia from an early point have relied on land-based missiles, [so] this is ‘fair competition,’” or rather turnabout is fair play. Furthermore, the Chinese analysis summarizes the CSBA report as a proposal for new ground-based missile deployments resting on three main arguments.

First, there is the goal to “increase rapid reaction capabilities.” Second, the logic is to “extend the battlefield,” allowing “destruction of enemy air-defense and anti-missile nodes, [thus enabling] pathways for follow-on cruise missile strikes.” Third, the CSBA strategy, according to this Chinese rendering, intends to “increase adversary costs,” for example, by forcing the enemy to invest in reconnaissance platforms and missile defenses. This Chinese analysis, moreover, quite accurately suggests three counterarguments addressed in the CSBA report: that such U.S. deployments could set off a new arms race; that their use could spark a nuclear exchange; and that American allies could be reluctant to allow such missile deployments on their territory. On the rather important point about nuclear escalation—the fate of the world hangs on it, after all—the Chinese analysis says in a seeming deadpan with Chinese characteristics: “The U.S. use of conventional missiles also would not lead to escalation to nuclear war [美国使用常规导弹也不会导致向核战争升级].” Without directly specifying, this is probably a simple rendering of the CSBA conclusion rather than an assertion regarding China’s actual response.

CSBA’s reasoning for its ambitious proposal is further explained in the Chinese analysis. The crucial “survivability [生存能力]” of the weaponry is said to be very high, especially if reinforced launching positions can be built. Not surprisingly, the Chinese analysis takes an interest in the section of the CSBA report that highlights the Taiwan scenario. Here, it is explained that the Americans wish to employ medium-range ground-launched missiles to suppress Chinese air defenses, in order that U.S. or allied airpower can be effectively unleashed against the Chinese transport ships. The analysis projects: “At the time that a Taiwan conflict erupts, U.S. forces can launch medium-range anti-ship missiles against the amphibious attack ships from Okinawa and also Miyako islands [台湾爆发冲突时, 美军主要从冲绳, 宫古岛一线发射陆基中程反舰导弹重点打击两栖战舰].” It continues, “It is also possible that missiles based on Luzon or Palawan islands of the Philippines can block the Chinese Navy from entering the eastern sea area of the South China Sea [还可能在菲律宾吕宋岛巴拉望岛部署导弹以阻止中国海军进入南海东部海区].” Consistent with the CSBA trademark “competitive strategies” approach, the Chinese summary relates that China would be forced to pay for expensive defenses, such as missile defense systems, according to the logic of the American strategic proposal. Yet, it is pointed out by the Chinese that “the great shortcoming” in American military strategy is that it is highly reliant on the “support of frontline coastal allied countries.”

True to its name, the CSBA report takes a close interest in the budgetary implications of such a strategy, and these numbers are faithfully reported in the Chinese summary. A cool $2–2.5 billion will apparently purchase fifty launch trucks (HEMTT) with four hundred missiles (LRASM). The Chinese project, however, that the short-term options for this strategy are not particularly promising, as the United States will be challenged to balance accuracy, range and speed. Indeed, they contend that “the Tomahawk that has quite long range is also too slow . . . [射程比较远的‘战斧’速度又太慢] In general, the purpose of the CSBA proposal is to build a “comprehensive reconnaissance strike complex in order to limit and weaken Chinese naval and air forces.” It aims to both delay a Chinese attack against Taiwan and also to “block the Chinese Navy from entering the Pacific.” The Chinese summary, further explains that the CSBA has the Crimean Crisis with Ukraine from 2014 on its mind. “As it was too far off to be helped, there was nothing the U.S. military could do [美军由于鞭长莫及同样无所作为],” the Chinese summary explains.

To conclude, we must face some unpleasant facts. Inevitably, part of a return to “great power competition” is, at least in part, the overt acceptance that this competition could get out of hand and spin into a shooting war. Competition is healthy, so we have been told, but then it could have some downsides too, for sure. The point of this short article is not to poke holes in the CSBA strategy, but rather to point out that such rhetoric is being read extremely carefully on the other side of the Pacific, with diligent strategies and indeed countermeasures to follow. It’s called an arms race, and this one, unfortunately, has the potential to exceed all others in scale and ferocity.

In this arms race, how do we know that China will actually pay more than America will since these ambitious construction projects (roads, tunnels, bunkers and the like) will be in their backyard (proximate to the Chinese mainland), but will be located many thousands of miles away from the continental United States? Will the locals appreciate and embrace all this digging and pouring of concrete over their scenic, tiny islands such as Palawan and Guam?

Besides, how much space is there really available in these far-flung, diminutive locations for deploying, and indeed dispersing, such high-tech weapons systems and all related support infrastructure on the cheap? Will the local residents mind if their petite tropical archipelagos suddenly become major targets for Chinese bombing and even invasion, presumably to forestall U.S. missile attacks?

Finally, how are these young analysts so certain that the proposed strategy will not set off a nuclear conflict? If they are wrong, can America bill them for the cost of the planet?