Yet Again: “Success Story” New Zealand Announces Yet Another Snap Lockdown for Auckland

The rest of the country will go into level 2 for a week from 6am tomorrow morning.

It comes after a new Covid-19 case was detected in the community this afternoon. The new case, 20, went to the GP in the afternoon yesterday for a Covid test – then went to the gym after that.

Ardern said that was “frustrating”.

Health officials have also confirmed tonight another Covid community case – the mother of this afternoon’s case.

She is isolating and asymptomatic.

Public venues, Ardern said, will be closed for seven days.

Gatherings outside of bubbles are prohibited.

She said this means all sports games now need to be canceled – that includes the Auckland Round the Bays.

She asked Aucklanders to again work from home and for children to stay home from school. [Schools and kindergartens are open only for children of essential workers.]

Supermarkets will remain open – “there is no need to rush to your supermarket”, she said.

The border around Auckland will be re-established – police are working to set those up now.

The Ministry of Business, Innovation and Employment says workers will require evidence of permitted activity or an exemption. “Travel documents that were issued earlier this month remain valid.”

People at high risk of illness are encouraged to stay at home, Ardern said. 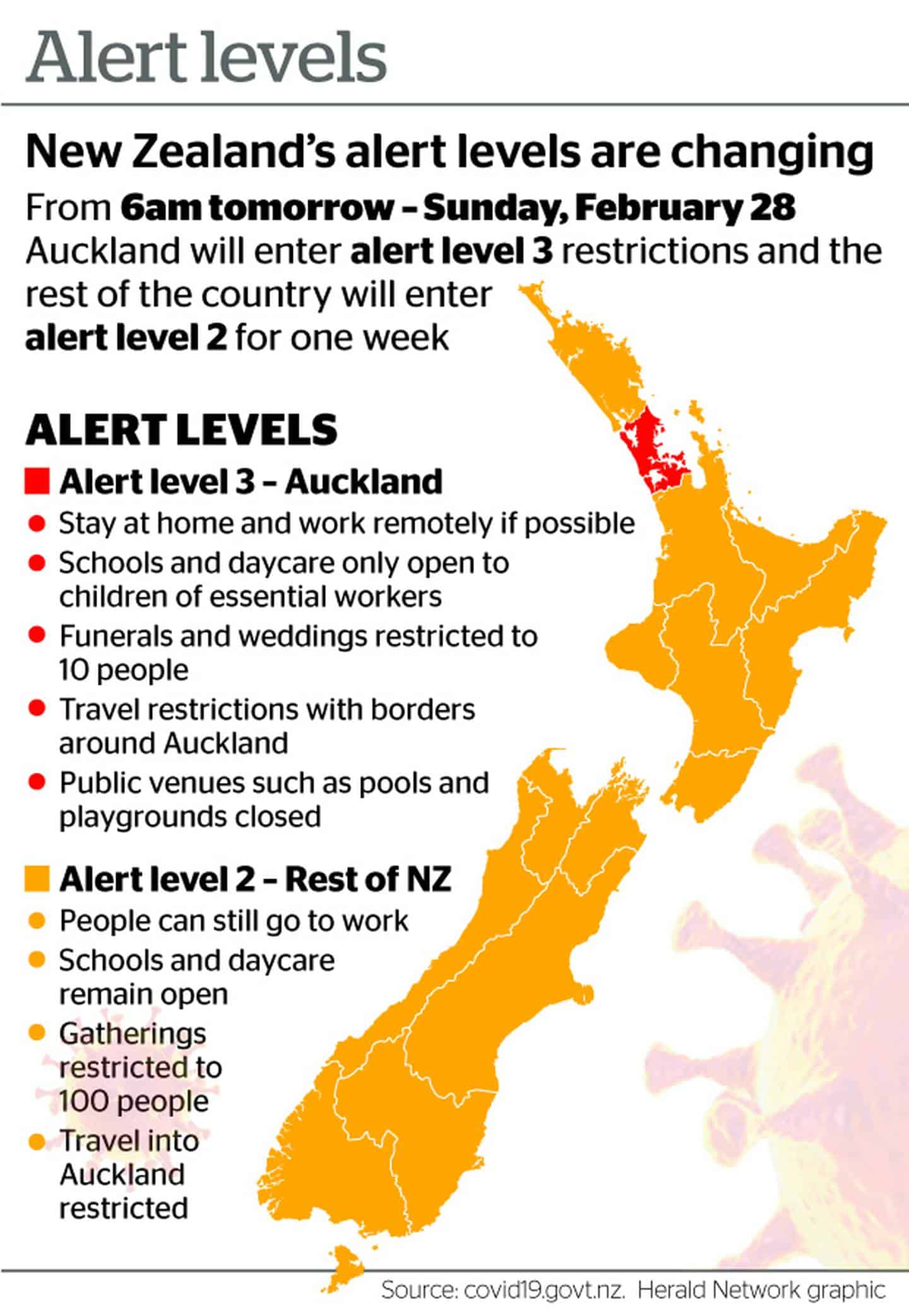 Ardern said Cabinet will have check ins along the way, in terms of alert levels.

But now there a number of levels of exposure.

“This will take some time,” but at this stage, it’s likely Auckland will stay at level 3 for the whole 7 days.

But for the rest of the county, the level 2 settings will be reviewed throughout the week.

The new case was a family member of a student from Papatoetoe High School. That student had tested negative 3 times before and had no known symptoms – that means there is no current link to the cluster.

They were tested on Friday and the positive result was received today.

Genome testing is underway – and there is a strong assumption that it’s from the current cluster.

But that cannot be confirmed yet.

Ardern said there was a “cause for concern” as this person has been infectious for a week and not been in isolation.

Cabinet met this afternoon after the new case was detected.

That person had been to a number of “well-populated sites”.

Director general of Health Ashley Bloomfield said testing of other household members has been completed.

The man’s mother has also tested positive for Covid-19, Bloomfield.

The new case was tested by their GP yesterday but has been infectious since last weekend.

The new case works part-time at the airport.

More sequencing is underway and will be back later tonight – he said that would likely show a link to the current cluster.

Bloomfield said it was “very unlikely” that any of the tests from recent outbreak are false negatives.

The new case went to the GP in the afternoon yesterday for a Covid test – they went to the gym after that.

Ardern said the rules have not always been followed in the latest outbreak.

“People who should have been in isolation, weren’t.”

Ardern said she was “confident” that the message to isolate was passed on.

But despite that communication, that advice was not followed.

“Unfortunately, we have still had breaches of requirements in this case.”

She said it needs to be kept in mind that “we are dealing with young people”.

She reminded New Zealand that she was not asking any more than was necessary to keep others safe.

We do have the ability to take enforcement action if we need to,” she said of people who break the rules.

But she said she needs people to still get tested and they can’t be afraid to do that.

Bloomfield said the situation was “challenging”.

He said the contact tracing system has come “under pressure” this week.

She said New Zealand was “very close to being in a more certain future” as the country waits for vaccines.

She called on New Zealanders to just hang in for a little longer.

During the last week, there has been “significant” testing in south Auckland, Bloomfield said.

He said the Ministry of Health is seeing people with muscle aches and general weakness and fatigue, as Covid-19 symptoms.

He is calling on anyone who has these symptoms to get tested.

“We are now in a position where we have a number of potential exposure events,” he said.

Those people need to be prevented from going out and infecting others.

Ardern said even if Auckland was still at level 3, this might not have been prevented

“We have every expectation that people would follow the rules.”

How Kiwis reacted to the news

Boos greeted the alert level announcement at the Joseph Parker v Junior Fa fight at Spark Arena in Auckland – but cheers erupted when the crowd was told the boxing was allowed to continue.

The announcer told the crowd the news, but then said:

“But hey! We’re gonna have these fights!”

On the Parker fight, Ardern said that does not need to be called off.

The Prime Minister said there needs to be a cut-off, which was 6am tomorrow.

“If you have heard this request now, we want you to act now,” she said.

Finance Minister Grant Robertson said that since the lockdown is more than 7 days, business support now kicks in.

This triggers the wage subsidy scheme and that applies nation-wide.

This will be paid in a lump sump, he said.

He said the Ministry of Social Development has been providing support to the Papatoetoe area.

He is asking anyone in the area who needs to, to get in contact with MSD.

He said there are some families where a disruption like this would cause them “significant concern”.

On the costs, he said: “We have this buffer available”.

Robertson said the worst thing for the county and the economy right now would be a massive Covid-19 outbreak.

Based on previous lockdowns Auckland level 3 and rest of NZ at level 2 costs the economy about $440m a week, according to ASB

Judith Collins on the lockdown

The new lockdown in Auckland and Level 2 for the rest of the country will be disappointing for all, National leader Judith Collins said.

“No one wants to be yo-yoing in and out lockdown.

“National said the decision to go out of Level 3 on February 17 was a bold and ambitious call.

“At the time we still didn’t know the source of the original case, there were two new community cases of the more transmissible strain that day, and not all of the high school students had been tested.

“Now Auckland is back in lockdown with all the consequences that brings.
“We need to consider tougher penalties against those who are not following public health advice around isolation and testing.

“All New Zealanders will be frustrated at the level of non-compliance. Relying on people to do the right thing looks to have reached its limits and we may need tougher penalties to make sure everyone follows the rules.

“I understand Aucklanders’ frustration at having to return to Level 3 lockdown, with the disruption it causes to everyone’s lives and the impact it has on businesses, many of which are already struggling,” Auckland Mayor Phil Goff said.

“However, the consequences of letting the virus spread would be far more disruptive and would put people’s lives at risk.

“No one wants to be in lockdown, but it is the most effective means by which to stop a potential new outbreak, especially given the increased transmissibility of the new variant of the disease,” he said.

“We are in a much better place than almost any other country in the world because of our strong collective response so far, so we need to keep it up.

“Aucklanders are old hands at this now. We know what to do to beat the virus and we will get on and do it.

The Ministry of Health has released four new locations of interest tonight:

More locations of interest will be up on the Ministry of Health’s website soon.

Anyone who visited these locations is to be considered a casual contact of a Covid case “out of an abundance of caution”. No specific times have been mentioned by the Ministry so far.

Meanwhile, a gym in Papatoetoe has been closed today after being told a person who has tested positive had visited twice, including on Friday.

This exact location has not been confirmed by health officials, but it is located in Hunter Plaza.

“We have been notified by Auckland Regional Public Health that a person who tested positive for Covid 19 visited our Papatoetoe location on the dates and times below.”

“We have been advised the Auckland Regional Health Board will contact directly anyone who was in the gym during that time and designated as a “Close” or “Casual Plus” contact who should follow the steps below.”

Health officials’ focus remains on KFC in the Auckland suburb of Botany. A family member of one of the Papatoetoe High School students who tested positive had been told to stay home and isolate, but instead went to work at the fast-food restaurant on Monday.

The Ministry of Health said earlier today there were three categories of contacts related to KFC. Eleven people in the first category are close contacts plus who also worked there and are in 14-day isolation.

Yesterday Prime Minister Jacinda Ardern said she was, “like everyone, frustrated” about the person who went to work at KFC.

“We want people to do the right thing because that’s what keeps everyone safe.”

Despite this, she is warning against a “mass pile [on]” of the person in question, as that might create an environment where people are too afraid to get tested.

She is asking for everyone who may have come into contact with the new case to “do the right thing” and isolate.

And if they don’t, she is sounding a warning: “There is a section 70 order”.

That order means a medical officer of health can oblige people to isolate.

“We have some legal footing for that … and so there are repercussions,” Ardern said.

Earlier today, prior to the latest community case being revealed, there was only one Covid-19 case in managed isolation.