Yes, Democrats Are Trying to Steal the Election in Michigan, Wisconsin, and Pennsylvania

As of this writing, it appears that Democratic Party machines in Michigan, Wisconsin, and Pennsylvania are trying to steal the election.

As reporters and commentators went to bed early Tuesday morning, all three states were too close to call, but President Trump led former Vice President Joe Biden by comfortable margins—far beyond what had been predicted in the polls. None of the networks called these states because enough mail-in ballots remained uncounted that it could swing either way, but Trump’s position looked good.

Then, something strange happened in the dead of the night. In both Michigan and Wisconsin, vote dumps early Wednesday morning showed 100 percent of the votes going for Biden and zero percent—that’s zero, so not even one vote—for Trump.

In Michigan, Biden somehow got 138,339 votes and Trump got none, zero, in an overnight vote-dump.

When my Federalist colleague Sean Davis noted this, Twitter was quick to censor his tweet, even though all he had done was compare two sets of vote totals on the New York Times website. And he wasn’t the only one who noticed—although on Wednesday it appeared that anyone who noted the Biden vote dump in Michigan was getting censored by Twitter. 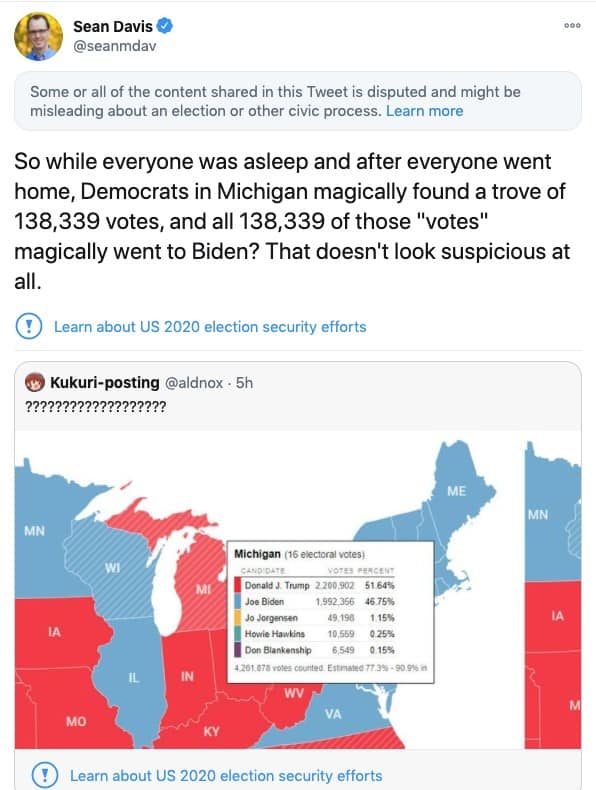 Others were quick to note the partisan censorship from Twitter and raise concerns over how 100 percent of a vote dump could possibly go to Biden. But the social media giant has maintained its crackdown on sharing this information. Twitter users could not like or share a tweet from the Daily Wire’s Matt Walsh noting the 138,339-vote dump.

Buzzfeed later reported that according to a spokesperson at Decision Desk HQ, the votes for Biden were the result of a “data error” from a “file created by the state that we ingested.” When the state noticed the “error” it updated its count, which somehow gave 138,339 votes to Biden and zero to Trump.

It turns out, the vote dump was the result of an alleged typo, an extra zero that had been tacked onto Biden’s vote total in Shiawassee County, Michigan. [Which still doesn’t explain why it would go 100% for one candidate.] It seems the error was discovered only because Davis and other Twitter users noted how insane and suspicious the vote totals looked, and demanded an investigation that uncovered what was either a typo or an incredibly clumsy attempt to boost Biden’s vote count.

There was also something suspicious about the vote reporting in Antrim County, Michigan, where Trump beat Hillary Clinton by 30 points in 2016. Initial vote totals there showed Biden ahead of Trump by 29 points, a result that can’t possibly be accurate, as plenty of journalists noted.

After the strange results caught national attention, election officials in Antrim County said they were investigating what they called “skewed” results, working with the company that provides their election software to see what went wrong. The county clerk said they plan to have an answer by Wednesday afternoon.

Then another mysterious all-Biden vote dump happened in Wisconsin. Biden miraculously overcame a 4.1-point Trump lead in the middle of the night thanks to vote dumps in which he got—you guessed it—100 percent of the votes and Trump got zero.

Note the vertical lines in both graphs below:

On Wednesday, the Trump campaign demanded a full recount in Wisconsin, citing “reports of irregularities in several Wisconsin counties which raise serious doubts about the validity of the results.”

In Pennsylvania, the Democratic scheme to steal the election is a bit different. Rather than vote dumps that impossibly go 100 percent to Biden, Pennsylvania is relying on the Democratic Secretary of State’s plan to count indisputably late mail-in ballots as though they were received on Election Day—even if they have no postmark.

This plan was of course rubber-stamped by the Pennsylvania Supreme Court, which cited the need for “equitable relief” to address mail delays amid the pandemic. Although it’s true that the long delays we’ve seen for absentee ballot counts are due in part to state laws in Michigan, Wisconsin, and Pennsylvania that prohibit the counting of absentee ballots before Election Day, which is not the case in most other states. But the cumulative circumstances under which these absentees ballots are now being tallied is highly suspicious.

Unless election officials in Michigan and Wisconsin can explain the overnight vote-dumps and, in Michigan, the “typo” that appeared to benefit Biden, and Pennsylvania officials can explain their rationale for counting ballots with no postmark, the only possible conclusion one can come to right now is that Democrats are trying to steal the election in the Midwest.

This Russian capability disappeared as soon as the right person won. https://t.co/xJ3JbSI5oP

The actual math points to a Trump triumph in Arizona, here are the numbers.

Doesn’t Pennslyvania’s Secretary of State inspire a lot of confidence in their ability to conduct impartial vote counts? https://t.co/4D5VbzTdtk

While Biden is wheeling his chair for a victory lap and Faux is cooking-up high-octane doomerism, DJT's folks are going to the courts in key states, preventing Cook County-style electioneering from allowing the media to prematurely call the race. This is DJT's best play here.

Mayor @RudyGiuliani in #Philadelphia: "This form of balloting has always been considered the most prone to fraud. That's according to the New York Times – when it didn't apply to candidate @realDonaldTrump." pic.twitter.com/kEB4mO1tC0

The Trump campaign says it has won in Pennsylvania, North Carolina & Georgia, three states where it is currently leading. And that it expects to win Arizona & Nevada as well, where the vote count is continuing. We may have multiple Florida in 2000 situations brewing.

Twitter is suppressing this tweet. As far as I know I have never been openly suppressed before, apparently asking questions about voting patterns – not accusing anyone of anything! – is no longer acceptable. pic.twitter.com/7ojZ0c2rfU

If Faux did not make this asinine call (which all but it and the AP either did not make or have since recanted), then folks would not be so freaked right now. Faux (whose lead the AP followed) has done more to sink DJT's fortunes than the Dems themselves! https://t.co/rbvnZoHSAc

Here's the moment where #CNNElection shows #Biden gaining 110,000 votes in #Wisconsin INSTANTLY. See how confused they are? They know this is BS. #Elections2020 pic.twitter.com/iBZA1UItML

now is the moment for Juan Guiado to declare himself president of the United States.

The fact that Florida has not been called for Trump yet, but Virginia was called before a single vote was counted should tell you all you need to know about the media.