Yes, 2021 Lockdowns Could Be Worse

Remember, this is a mind disease. Virus reality matters far less than what delusions take hold in cultist heads 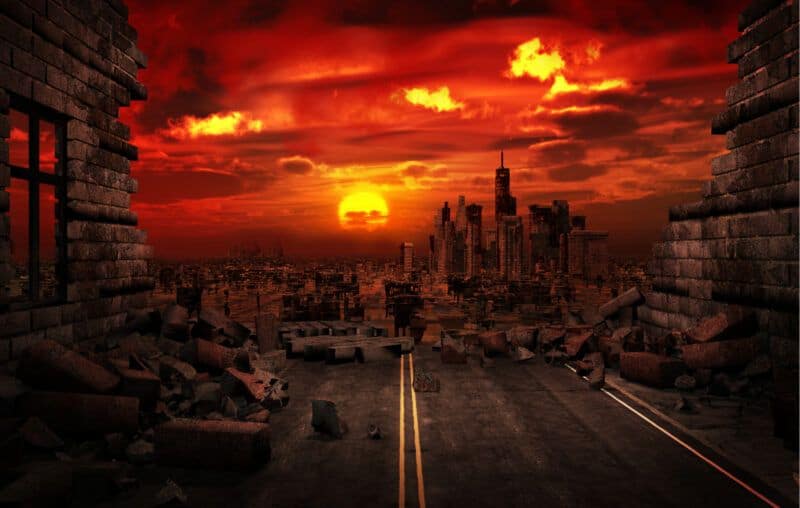 Coronavirus restrictions could get worse.

But how? Covid-19 came close to causing a legitimate crisis only in the New York City area and there only with “help” from Governor Cuomo’s kill people in nursing homes policy. Not that they needed much help as the virus has killed mostly the frail and elderly and according to one study people who normally would have died of the flu a year or two ago had not the last two flu seasons been relatively light. Moreover, death counts have been confusing, with documented instances of people dying in motorcycle accidents and from terminal cancer being counted as Covid-19 fatalities.

Death rates in the United States are running at 109% of expectations but parsing everything out is difficult because the lockdowns caused additional deaths from suicide and abuse [and heart attack] while decreasing deaths from motor-vehicle and other accidents. Definitive stats on the number killed by lockdowns, as opposed to the virus, as opposed to old age and other comorbidities, may never be available.

Even discerning the number of Covid-19 “cases” is problematic because many people who had the virus, especially early on, were not officially tested for it. On the other hand, tests, report the formerly venerable New York Times, now may be returning mostly false positives because they are super sensitive and return only a binary “yes” or “no” response even though being infected with a virus is a far cry different than being pregnant. Magnitudes matter when it comes to spreading the little sucker.

Another problem, as I pointed out previously, is that viral spread is usually not salient, so “the” scientists we are supposed to be following have never really tried to track an evolving polyglot mass this closely before, and they are clearly still pretty clueless about it all. But that is not a reason to panic about the virus; it is a reason to panic about the sanity or intentions of our leaders, who need to pay for destroying our civil liberties on a wing and a prayer.

In short, although the virus is less deadly than at first, and treatments have improved (for example by not putting people on those ventilators we so desperately thought we needed back in March with such alacrity), and the disease appears to have run its course in much of the country, politicians and the media continue to stir up uncertainty, which they use to stoke fear in the public, and continued compliance with government dictates, school closings, and such.

You, gentle reader, may be convinced it is largely hokum at this point, but that isn’t going to help you if most of your neighbors still insist on masks and social distancing, talismans and role-playing though they are.

If more coronavirus restrictions seem unlikely, look at what has been going on in Australia, which is creating a techno-police state in a reputed effort to save people from something that won’t, indeed can’t, hurt most of them.

The recent Federal District court decision smacking down Pennsylvania’s lockdown is heartening, but what took so long? I called for attacking the constitutionality of lockdowns on due process (5th and 14th Amendment) grounds back in mid-April but only the Wisconsin Supreme Court responded appropriately and quickly, in May. The power hungry alpha Wolf of Pennsylvania wants the court’s ruling not to hold until he can appeal it! The audacity of that move should trouble anyone who thinks things cannot get worse.

And it is not clear that masks and other social distancing mandates will meet the same fate as shelter-in-place orders and other core lockdown measures, at least before 2021 rolls in. As John Tamny recently noted on these pages, “corona-reverence is far more political than the believers have previously felt comfortable admitting.”

America has a long history of riots that make even looted retail stores, torched buildings, and occupied police precincts appear like a walk in the park by comparison. With so much at stake in the Presidential election due to our inability and unwillingness to curb the federal government’s power, both sides have incentives to rile up their bases when one or the other side loses this November. Where it ends, nobody knows, but the historical precedents are frightening.

Many early American riots were deadly affairs, replete with real bombs and cannon showering lead grapeshot hither and thither. And the targets of wrath were often critical infrastructure, not symbolic statues. In 1837, for example, Radical Democrats called Loco Focos stirred up the crowd for partisan gain but after New York City’s mayor was assailed by sticks, brickbats, and pieces of ice (you thought Antifa invented that?), violence escalated and turned increasingly irrational.

Enraged rioters breached the defenses of flour wholesaler Eli Hart and destroyed much of his stock because they believed bread prices were too high. They equally irrationally pledged to accept only hard money (gold and silver coins) instead of bank money (notes and deposits) when the former was needed to acquire more flour from places not ravaged by the Hessian Fly, cholera, and a giant fire, one caused not by global warming but by allowing too much dry wood to accumulate in one place (Manhattan). What is that old saying about repeating history again?

Now imagine 2020’s murder hornets, Covid-19 lockdowns, urban riotish uprisings, and such but with enemy aircraft overhead and missiles inbound because we are also at war with Iran. Or China. Or Russia. Or North Korea. Or all of them.

Normally, countries do not want to throw down against the United States, which has proven its willingness and ability to invade, occupy, and generally ruin countries no matter how many trillions of dollars it takes. But it isn’t clear that Uncle Sam has trillions to spare anymore, especially if it is going Fight Club on itself. And it is clearly vulnerable in an age when the World War II Japanese tactic of trying to light its western forests on fire has become appallingly easy.

Moreover, America’s rulers might be interested in fomenting a war about now to distract from domestic difficulties. They are likely under the silly misapprehension that war is “good for the economy.” That sounds crazy, and it is, but we are talking about the same brainiacs who gave up the growth-inducing free trade consensus for tariffs, industrial policy, and anti-price gouging laws!

The war scenario struck me recently while rereading Robert Nisbet’s Twilight of Authority (New York: Oxford University Press, 1975 but also available at the Liberty Fund). An historical sociologist who taught at several major universities and was a researcher at the American Enterprise Institute, Nisbet (1913-1996) argued that Western Civilization could soon collapse into a new dark age. His work was easy to dismiss when America’s socioeconomic fortunes improved in the 1980s and 1990s thanks to deregulation, more rational trade policies, and productivity increases tied to the telecom revolution. But looked at from the perspective of September 2020, his book appears prophetic. Consider its chilling opening passage:

“Periodically in Western history twilight ages make their appearance. Processes of decline and erosion of institutions are more evident than those of genesis and development. Something like a vacuum obtains in the moral order for large numbers of people. Human loyalties, uprooted from accustomed soil, can be seen tumbling across the landscape with no scheme or larger purpose to fix them. Individualism reveals itself less as achievement and enterprise than as egoism and mere performance. Retreat from the major to the minor, from the noble to the trivial, the communal to the personal, and from the objective to the subjective is commonplace. There is a widely expressed sense of degradation of values and of corruption of culture. The sense of estrangement from community is strong.”

The major “stigmata,” as Nisbet terms the signs of twilight, leads to a dark age of militarism because war appeals to increasing numbers of people as a way out of “economic crises, political division, and intolerable social disintegration.” The horrors of war go unheeded in the twilight era because “a spreading wave of unreason” engulfs both “popular and philosophical writing.”

And one final gem.

While a year is defined by the amount of time it takes the earth to revolve once around the sun, when a new year begins is arbitrary and varies over culture (e.g., the Chinese or Jewish new years) and over time. The new year in the Christian Western world, in fact, used to begin in March, which is why the names of our months do not correspondent with their current number: sept = 7, but it is the ninth month of the year currently; oct = 8, but it is the tenth month, nov = 9; and dec of course = 10.

So buck up, buckaroos, because 2021 is just a cultural construct anyway. The world will improve not on an arbitrary day but when you all decide to make it a better place.