Xi didn't even mention the trade war. He didn't need to. The message could not have been clearer

Chinese President Xi Jinping has sought to tap into the “Long March” spirit of endurance to rally the public as trade and technology tensions rise with the United States, observers said.

In his first domestic trip since the escalation of the US-China trade war early this month, Xi visited one of the country’s major rare earths mining and processing facilities in Ganzhou, Jiangxi province, state news agency Xinhua reported on Monday.

He also paid respects at a monument in Yudu, a county in the city, marking the start of the Communist Party’s Long March 85 years ago, the report said.

Xi was accompanied by Vice-Premier Liu He, Xi’s most trusted adviser and China’s top trade negotiator in the year-long talks with the US.

State media gave few details of the trip and made no mention of the trade war, but analysts said the president’s visit sent a strong message of China’s determination in the stand-off.

China has toughened its rhetoric in recent weeks as Washington raised tariffs on thousands of Chinese exports and put China’s telecom champion Huawei on an export-control list. There is also growing speculation in China that Beijing could consider banning the export of rare earths to hit back at the US. 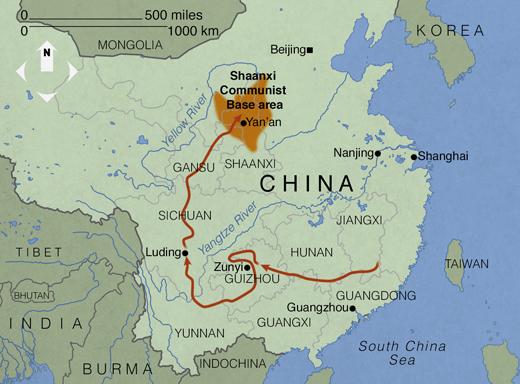 The Long March was an epic military retreat from 1934 to 1936 undertaken by the party’s Red Army, the forerunner of the People’s Liberation Army, to evade Kuomintang troops during the Chinese civil war. The thousands on the march covered some of the country’s most difficult terrain and the feat is evoked as a symbol of unity in the face of ordeals.

Chen Daoyin, a Shanghai-based political researcher, said the Long March had great significance in the history of People’s Republic and the party.

“Against the backdrop of the China-US confrontation in trade and technology, the leader’s trip to Yudu sent a clear message of enduring hardship,” Chen said. “We have to be prepared for the possibility that economic confrontation with the US may persist over the long term.”

Kerry Brown, director of the Lau China Institute at King’s College in London, said Xi’s appearance with Liu showed his support for the vice-premier as “a comrade in arms or soldier by his side, while they engage in this looming issue with the US”.

“So it’s a clever deployment of domestic history and the kind of politics and narratives of the Communist Party to face the issues they are facing with the US,” Brown said.

“It’s a kind of move for propaganda purposes and to show people in China this is leadership that derives from previous leaders who faced huge issues but were able to prevail, and that despite current turbulence because of US-China issues, they will be able to get through.”

According to Xinhua, Xi’s trip to Ganzhou included a stop at JL Mag Rare-Earth, a major rare earths processing company.

China is the world’s biggest producer and exporter of the minerals, many of which are vital to a low-carbon technologies.

Rare earths were among the few items excluded from US plans to put tariffs on almost all of China’s remaining exports to the United States, highlighting their strategic importance.

China accounts for 90 per cent of global production, but the government manages mining levels and it was reported last year that amid production quotas, the country became a net importer of rare earths last year.

Jin Canrong, a professor of international relations at Renmin University in Beijing, wrote an article last week suggesting that China could ban exports of rare earths to the US to punish the Washington for imposing additional tariffs. China does not import enough goods from the US to retaliate in pure tariff terms.

Beijing has weaponised the trade of rare earths before, slashing the export quota by 40 per cent in 2010. The US, Japan and the European Union filed a complaint against the Chinese quota at the World Trade Organisation in 2012, with the WTO ruling against China. Beijing dropped its export restrictions in 2015.

But other observers were sceptical of the effectiveness of a rare earths ban.

“It would be a small matter even if China weaponised rare earths to retaliate against the US,” Shi said.

Nevertheless, shares of JL Mag jumped by their 10 per cent daily limit in Shenzhen after China’s state broadcaster reported Xi’s visit to the facilities.

Arthur Kroeber, research head of Gavekal Dragonomics, said the political dynamic had changed in the trade negotiations and a trade war truce now looked unlikely until much later this year.

“We should prepare for an intensification of Washington’s ongoing efforts to stem the flow of technology from the US to China by investment restrictions, export controls, and limits on visas for tech-oriented students and workers,” Kroeber said.