"Amounting to nearly one million years of life lost" 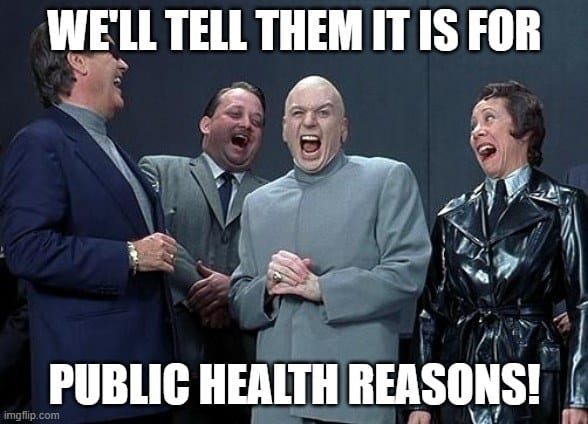 More than 200,000 people could die from the impact of lockdown and protecting the NHS, an official government report shows.

As national restrictions were imposed, experts from the Department of Health, the Office of National Statistics (ONS), the government’s Actuary Department and the Home Office forecast the collateral damage from delays to healthcare and the effects of recession arising from the pandemic response.

It estimated that in a reasonable worst case scenario, around 50,000 people would die from coronavirus in the first six months of the pandemic, with mitigation measures in place.

But in the report published in April they calculated that up to 25,000 could die from delays to treatment in the same period and a further 185,000 in the medium to long term – amounting to nearly one million years of life lost.

It comes amid debate over the easing of lockdown restrictions, with some arguing it is both too early to lift the measures and that they should have been imposed earlier, while other politicians have questioned whether the cure is worse than the disease.

Projected increased deaths within one year

The Prime Minister has stressed his desire to avoid a return to national lockdown.

In an interview in The Telegraph, Boris Johnson likened the measures to a nuclear deterrent, and said he did not want to impose blanket restrictions again, or think it would be necessary.

The UK’s National Statistician, Prof Sir Ian Diamond also said on Sunday that there had been no uptick in cases since lockdown measures had been eased but warned the nation would need to be vigilant come the autumn.

Professor Chris Whitty, the Chief Medical Officer (CMO), and Sir Patrick Vallance, the government’s chief scientific advisor (GSCA) have both expressed concern that the damage from lockdown could be severe.

The report came to light after Sir Patrick told MPs at the Science and Technology Select Committee last week that calculations had been made to predict the number of deaths caused by the effects of lockdown, which was announced on March 23.

The report produced in the following weeks warned there could be 500 more suicides during the first wave, and between 600 and 12,000 more deaths per year resulting from a recession which had a significant impact on GDP.

They also forecast around 20 more deaths this year through domestic violence, and an increase in the number of accidents at home – in the ‘low tens.’ In total, under a worst case scenario, around quarter of a million people would die because of the pandemic response.

The figures were based on 75 per cent of elective care being cancelled over six months without significant reprioritisation when things returned to normal.

The number of elective hospital appointments dropped to around a quarter of usual levels in March and April and had only recovered to around half by the beginning of July.

Charities have increasingly warned that delaying diagnosis, pausing surgery and postponing treatment is a ‘ticking time bomb’ which will cause long-term harm.

Figures released by Cancer Research UK today show that as of May 30, there were more than 180,000 people in England waiting for an endoscopy – a rise of 44 per cent from the same time in 2019.

And around 2.3 million fewer tests that help diagnose cancer have taken place since lockdown compared to the same time last year, and 51 per cent more people are waiting for colonoscopies.

Michelle Mitchell, Cancer Research UK’s chief executive, said: “Covid-19 has had a devastating impact on cancer patients and services across the UK.

“In the early weeks of lockdown urgent referrals plummeted, screening programmes were paused, surgeries were cancelled, clinical trials were put on hold, and existing health inequalities were exacerbated.

“It’s now more crucial than ever that the Government works closely with the NHS to ensure it has the staff and equipment it needs to clear the mounting backlog and get services back on track before this situation gets even worse – especially in the event of a second wave.”

The report points out that nearly 500,000 people would have died from coronavirus if the virus had been allowed to run through the population unchecked. [Which is a blatant lie.] And there would have been more than a million non-Covid deaths resulting from missed treatment if the health service had been overwhelmed in dealing with the pandemic.

But charities said more should have been done to get medical care up and running quickly when it became clear early on that the NHS was not stretched. Nightingale Hospitals in particular were largely empty even at the peak of the pandemic and have only recently been reassigned for normal care.

Dr Sonya Babu-Narayan, Associate Medical Director at the British Heart Foundation and Consultant Cardiologist, said it was a priority to restore heart and circulatory care: “This report is a sobering wake-up call for governments and the NHS across the UK to urgently restore and maintain care for people with medical conditions including heart and circulatory diseases.

“Although the latest statistics have shown fewer excess deaths in recent weeks, people are still experiencing delays in accessing vital treatment and care, which could make them sicker and ultimately lead to more deaths from both undiagnosed and existing conditions.

“The growing and significant backlog must be tackled to prevent a tidal wave of illness overwhelming the NHS whilst it’s fighting Covid-19.”

Last week, the University of Oxford found that 5,000 fewer heart attack patients had attended hospital from March to May, many of whom could have died through lack of medical care.

The Institute of Cancer Research (ICR) also warned that delays in diagnosis and treatment meant many people who would have recovered from their illness were now facing incurable cancer.

Modelling by the ICR suggests that a three-month delay to surgery alone across all Stage 1-3 cancers could cause more than 4,700 attributable deaths per year in England.

Clare Turnbull, Professor of Cancer Genomics at The Institute of Cancer Research, London, said: “Lockdown and re-deployment of NHS workers as a result of the COVID-19 pandemic is causing significant disruption to cancer diagnosis and management.

“At this point, it is crucial to ramp up capacity as quickly as possible to allow cancer services to clear the backlog accumulated during lockdown.”

Figures released last week from Target Ovarian Cancer showed that more than half of women with ovarian cancer surveyed said their treatment had been affected by coronavirus.

Annwen Jones OBE, Chief Executive of Target Ovarian Cancer, said: “It’s hard to overstate the difficulties faced by women with ovarian cancer during this pandemic. We must not let them down as health services recover.

“It is urgent that we now see comprehensive plans and a timeline for the full restoration of diagnostic, treatment and support services. This is the only way to avoid worse outcomes and a devastating toll on women’s lives.”

Data compiled by The Telegraph showed that by the end of May there had been more than 23,000 excess deaths in care homes or at home, not linked to Covid-19, since the middle of March.

There are also fears that the government’s ‘protect the NHS’ message was too effective, with many people staying away from hospitals when they needed urgent medical help.

In April, Chief Executive of NHS England Sir Simon Stevens was forced to issue an urgent message asking people to come forward if they needed treatment.

However the report did predict some good news for lockdown. Experts calculated that there would be approximately 200 – 500 fewer road traffic and air pollution deaths, 67 fewer murders and a small drop in work related accidents during the six month first wave period.

There may also be a positive impact on health as a result of increased physical activity as people take the opportunity to use their one instance of daily exercise, the authors state, although they also warn that some may become more sedentary whilst staying home. And there is some evidence that recessions can improve mortality rates, possibly saving a few thousands lives.