Why Is There an Enormous Global Dollar Shortage Despite the Fed’s Massive Injections?

In response to the economic collapse caused by the general confinement imposed by state governments as a result of the Covid-19 pandemic, the Federal Reserve (the American Central Bank) announced an injection of more than $ 2 trillion into the American economy .

But the dollar remains strong against other currencies in the world – as can be seen from the high value of the DXY index , which compares the US currency to the euro, the yen, the pound sterling, the Canadian dollar, the Swedish krona and the Swiss franc.

So the question is inevitable: how can the Fed launch a program of practically unlimited monetary stimuli, and the dollar index still remain strong?

The answer lies in the growing global scarcity of the dollar, something that should serve as a lesson for monetary alchemists around the world, who swear that it is possible to do in other Central Banks (mainly in developing countries) what the Fed is doing.

First of all, it is worth remembering that gold once again reached the historic highs that had only been achieved in 2011 , which proves that monetary inflation is in fact already turning into asset inflation. However, it is a fact that the dollar remains strong against other currencies in the world, which requires explanations.

The $ 2 trillion stimulus package agreed with Congress is equivalent to approximately 10% of American GDP. And, if we include the lines of credit created by the Fed to guarantee working capital for companies, we have a liquidity of US $ 6 trillion for consumers and companies over the next nine months.

The stimulus package approved by the American Congress consists of the following items:

1) Permanent tax transfers to families and businesses of nearly $ 5 trillion.

3) Small businesses will receive total loans of US $ 367 billion, which will become subsidies if jobs are kept

4) There will be an increase in the values ​​of unemployment insurance to the value of 100% of wages lost during four months (US $ 200 billion).

6) The rest of the package will come from temporary measures to help businesses and families, including tax deferrals and tax waivers.

7) Finally, the US $ 500 billion Treasury Exchange Stabilization Fund will be used to lend to non-financial companies.

To all of this, we must add the massive quantitative easing program announced by the Fed.

First, we must understand that the word “unlimited” is just a communication tool. It is not unlimited. The entire program is limited by demand from the rest of the world for US dollars. If there is a loss of confidence in the dollar, the program ends.

I myself have had the privilege of working with several of the current members of the Fed, and the truth is that they know it is not unlimited. But they know that communication is important.

The graph below shows the evolution of the assets held by the Fed. To buy assets, the Fed creates dollars out of thin air. That’s how it does its programs of monetary expansion and quantitative easing. 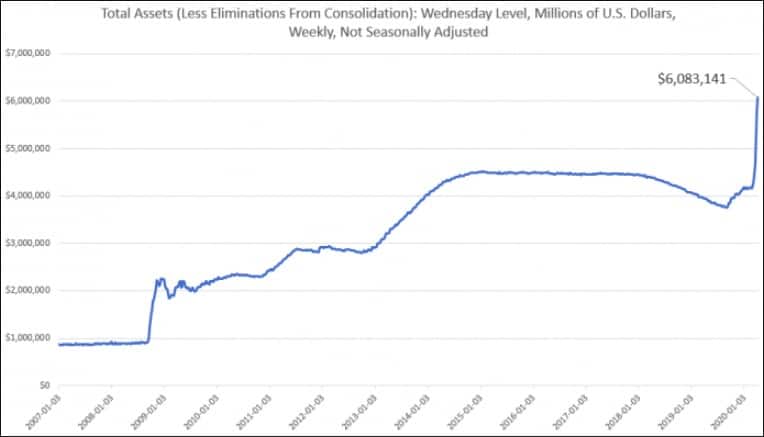 The Fed identified the Achilles heel of the world economy: the huge global shortage of dollars. This was already obvious in September of last year, when the American repo market froze .

The global dollar shortage is currently estimated at $13 trillion. This is the value we reach when we take the entire American money supply, including the bank reserves held by the Fed , and from it we subtract all global dollar-denominated liabilities, especially in emerging countries.

How did we get to such a dollar shortage?

Over the past 20 years, dollar-denominated debt, in both emerging (led by China) and developed countries, has exploded. The reason is simple: domestic and foreign investors do not accept incurring massive risks in the local currency, as they know that, in times of turbulence, as now, several countries experience a sharp exchange devaluation (the dollar is more expensive in terms of local currencies). Such a devaluation generates intense losses for these investors, who, in remitting their profits, would lose all their gains when converting the local currency to the dollar. (See details of this process here ).

Consequently, investors only accept to finance governments and companies if they issue bonds in dollars.

Likewise, several Central Banks around the world, mainly in emerging countries, are making use of their international reserves to try to contain some of the intense and sudden devaluation of their currencies. But international reserves are effectively made up of US Treasury bills. That is, when Central Banks sell reserves, they actually sell US Treasury bills in exchange for dollars, which accentuates the world demand for the American currency.

According to the Bank for International Settlements (the Basel Bank), the number of dollar-denominated debt securities issued by governments and companies in European, emerging countries and China doubled from $30 trillion to $60 trillion between 2008 and 2019 ( Source: page 6 ).

These countries today have to deal with more than $2 trillion in debt that will mature in the next two years.

To make matters worse, the drop in exports, GDP and commodity prices(initially because of the trade war and now because of the Covid-19 pandemic) has created a huge hole in the inflow of dollars into these countries.

So, if we take the dollar reserves of the most indebted countries and deduct foreign liabilities in dollars, and take into account the estimated dollar revenues in this crisis (exports and foreign direct investment), we have that the global dollar shortage could rise from US $ 13 trillion in March 2020 to $ 20 trillion in December. And that if we consider that the global recession will not be lasting.

China has more than $ 1 trillion in reserves and is one of the best-prepared countries to deal with the situation, but still, these total reserves cover only 60% of the country’s dollar liabilities. If export earnings collapse, the dollar shortage will increase. In 2019, the Chinese took on another $ 200 billion in debt as their exports slowed and the inflow of dollars fell short of expectations.

Gold is not enough

Gold reserves are not enough. If we look at the reserves of the main economies in the world, they represent less than 2% of the money supply. Russia has the largest gold reserve in relation to its money supply: 9% of M2.

As such, there is no “gold-backed” currency in the world, and the one that is theoretically more protected in gold – which is the ruble – suffers the same volatilities as other currencies in times of recession and a sharp drop in commodity prices due to the scarcity of dollars (see the sharp depreciation of the Russian ruble in early 2020).

Still, the volatility of the Russian ruble does not even compare to the volatility of those Latin American countries that suffer from both a drop in international reserves and a collapse in their own citizens’ demand for domestic currency (as is the case in Argentina ).

In addition, the accumulation of gold reserves by central banks in recent years was more than offset, in just a few months, by the increase in the monetary base of these countries. In other words, gold reserves in several countries have increased, but at a much lower rate than the expansion of their monetary bases.

The US is the privileged – and you can’t copy

Given all of this, the Federal Reserve knows that it has the largest of all bazookas at its disposal, as the rest of the world needs at least $20 trillion by the end of the year, so it can expand its balance sheet (creating dollars out of thin air) and thereby finance the US government’s $ 10 trillion budget deficit, and yet the dollar shortage will remain.

The US dollar does not weaken excessively (although, as stated, it is weakening markedly against gold) because all other countries in the world are experiencing loss of reserves, reduced dollar inflows and the need to roll over dollar debts at the same time.

These are expanding their respective monetary bases (in local currency) at a rate higher than that of the Fed, but without the privilege of being the international currency of exchange and the global reserve currency.

In other words, the global demand for dollars has never been stronger: on the one hand, the monetary expansion of other countries is being as or more intense than that of the Fed itself; on the other hand, the supply of dollars has suddenly become scarce because of declines in exports and the collapse in commodity prices.To make matters worse, as explained, there is also a need to obtain dollars in the short term to roll over debts.

And it gets worse: under current circumstances, and with a global crisis on the horizon, global demand for emerging country bonds in local currencies tends to fall sharply, well below their financing needs. Thus, the dependence on the US dollar will increase. Why? When hundreds of central banks try to copy the Fed by cutting interest rates without having the same legal, financial and investment security as the US, they will simply see a generalized flight from their currencies, further accentuating the currency devaluation.

Therefore, those Central Banks that try to copy what the Fed is doing, ignoring that the real demand for their respective currencies is much less than the demand for the US dollar, will only cause local and foreign investors to abandon these currencies even more, because of the inflationary risk. This could make the exchange rate devaluation even worse.

There is no “monetary sovereignty” without security for investors.

So far, the only country that has demonstrated that it has understood this is Japan. As the country with the largest dollar reserves in the world today , Japan not only has its currency completely backed by dollars, but also has a completely legal environment. safe, predictable and conducive to foreign investments, in the same pattern as USA, UK and Switzerland. That is why the country was able to afford zero interest without suffering major consequences.

This race towards zero interest that is being practiced by the Central Banks is not a race to see who wins, but to see who loses first.

Those who lose will be those who believe they are capable of copying the Fed and the United States without having the same economic freedom, the same legal environment and the same security given to investors.

The Federal Reserve can, and should, be criticized for its monetary stance, but at least it is the only Central Bank in the world that really analyzes the global demand for its currency (US dollars) and that apparently knows that the money supply cannot be increased beyond the demand for it.

Indeed, the Fed’s quantitative easing is not unlimited; on the contrary, it is totally limited by the true global demand for the American currency, something that other Central Banks ignore or prefer to forget.

Can the US dollar lose its global reserve currency position? Of course yes. But it will never lose it to another country that decides to commit the same types of monetary madness as the Fed without taking into account the real global demand for the currency they issue.

This should be a lesson for all countries. If you fall into the trap of believing you have the world’s reserve currency, and start behaving like the Fed, printing money without any regard for the global demand for that money, then your dependence on the dollar will intensify. And that at best.