Why Is Alt-Media Embracing the Police State?

Closet Maoists coming out of the woodwork 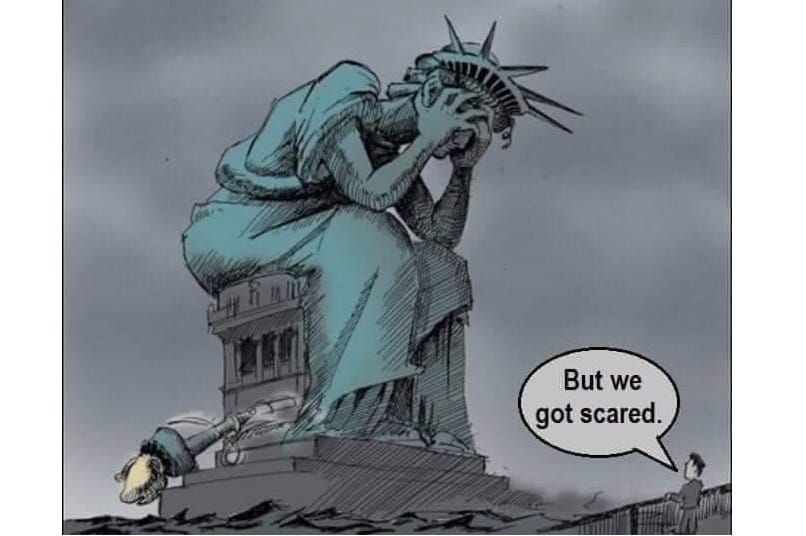 It should be obvious by now to anyone that the covid19 pandemic, whatever its origins, is being used to fast forward a “new normal” world of unparalleled government power, surveillance and curtailment of individual liberty.

We are looking already at:

And this is only the starter course. We can be pretty sure they are currently just easing us in. The real stuff will be rolling along in the next months or maybe years (depending on how quickly they feel able to get this on).

This is the fabric of nightmare. A worst-case horror story that is the absolute quintessence of everything the alt-media is supposed to oppose.

Surely, you would think, any self-respecting alt-media person would be opposing this with everything they have while they still have a voice.

Well, some of us are of course. And we’re going to be posting links to other sites currently doing great work challenging this rollout.

But, weeks into this crisis, there are some very prominent voices still refusing to either question the official narrative of the pandemic or unequivocally condemn the fast dawn of the “new normal” Brave New World.

We’ve held off from confronting this for a while now. We figured people needed time to adjust or wake up to the reality of what was happening. It’s shocking after all, and deeply disorienting, and different individuals need different amounts of time to get their bearings when something that shakes their worldview comes along.

But adjustment time is long over by now.

Let’s also be clear, we’re not condemning people for simply disagreeing with us. We expect disagreement on some issues. It’s a source of strength for all of us.

But this is not about relatively minor differences of opinion or interpretation.

This is sophisticated analysts, with resources and experience, failing to condemn, and even supporting, what amounts to de facto international martial law.

This is Labour activists who mere weeks ago were calling Boris Johnson a murderer and psychopath, now cheering as he is handed total control of their lives and their children’s lives.

This is respected journalists, commentators and academics who loudly condemned the cynical lies about WMDs or ‘chemical attacks’ in Douma, the fake videos and fake White Helmets, suddenly and uncritically accepting the veracity of every government virus narrative, every unsourced video and media meme that has #covid19 as a hashtag.

This is people who have campaigned against the Patriot Act for 19 years, signing off on the new US anti-covid19 legislation without a murmur; who know that governments always abuse their powers, thinking they somehow just won’t abuse these.

This is people who know about Guantanamo and who have seen Julian Assange humiliated and abused, somehow thinking the people who did these things won’t use the new post-covid police state to do them even more.

This is something more than simple denial. It’s – what?

Are they simply paralysed with fear, either of the hyped-up virus, or the scary dystopia we are all suddenly inhabiting? Is it Stockholm Syndrome? Is it still possible some of them will wake up or unfreeze and see what is going on?

Are some of them gatekeepers, sleeper assets being activated in this extreme situation specifically to divert and delude the questioning and sceptical people who tend to follow them?

Well, I guess we can’t completely rule that out, can we, though I wouldn’t want to make that claim about anyone.

Are some just being self-serving and shallow, playing at being dissident while the price was low enough? Did they think writing a popular alt media blog was an easy way to be cool, but never had any intention of standing by any of it once it got a bit risky to do so?

I mean you are not gonna get that coveted slot on RT or Buzzfeed by taking on this major ‘new normal’ narrative are you? So that’s a factor potentially.

You can see the appeal of just sitting on the fence and talking in vague terms about how this fascism malarkey is a bit worrying, but stopping short of actually condemning it.

That way you keep the option open to be ‘radical’ again once it looks safe enough to do so, but also don’t risk your comfy and lucrative relationship with the Establishment Left, who are all eagerly embracing the new age of mass incarceration and really want you to do the same.

Are some, as has been unkindly suggested, just too stupid to see what’s going on? Do epidemiology stats hurt their brains? Does thinking too much take up valuable psychobabble time? Is it hard to see the black clouds of tyranny rolling in when your head is too firmly planted in your own delightfully quirky posterior?

Or – we have to ask this – are a number of them simply, well, fascists? Do they actually support tyrannical top-down authoritarianism? Has their beef with the PTB merely been that they themselves are not currently high enough up that hierarchy? And do they see the covid19 rollout as some sort of revolution that will launch them and their chums into the positions of sweet supremacy they always knew they deserved?

Easy to preach permanent lockdown and biometric implant slavery when you figure none of it will apply to you and your family, I suppose.

All of these potential explanations may be the answer in some cases. And there could be a hundred other reasons besides.

But, in the end, do the explanations really matter? Do they change anything? Excuse anything?

The fact is these people stood at the barricades cheering and rallying the masses until the tanks could be seen rolling down the street – when they promptly upped and went over to join them.

Is there anything else to be said about that?

And where do we go from here?

It's very noticeable now how some 'influencers' who self-identify as 'Communists' & 'Marxists' (of the Middle Class variety, mainly academics + Media personalities) on 'The Left' are actively promoting draconian #Lockdown in West & see it as a political opportunity… (con't)

2) amid panic & insecurity, and seem to believe that all this economic/public suffering is 'necessary' as it will somehow hasten an 'end to Capitalism' bringing forth a new utopia where THEIR 'ideas' will be at the center of politics, these 'ideas' they hope to implement…

3) In my conversations w/some of these persons, they're not at all ashamed to openly eschew civil liberties in favor of some 'greater good' and want to see UBI + other 'socialist programs' like healthcare (which Europe already has anyway), 'climate change reforms' and so on…

4) Many of these middle class 'communists' are on one State payroll or another, or classed as 'Essential' – so #Lockdown hasn't affected their relatively comfortable incomes very much, hence they don't seem too bothered about skyrocketing unemployment & businesses destroyed…

6) they seem to believe that they'll somehow be able to Marshall the chaos of economic collapse in order to lead some nouveau Bolshevik revolt amid this artificially induced chaos we are now witnessing unfold. But perhaps the most unconscionable thing I've witnessed is that…

7) some of these same ideologues are also openly attacking any independent media who are doing the important work of exposing Gov-MSM lies and outright fraud strewn throughout this latest 'crisis'. They seem to be demanding the #Lockdown continue. History already warned us that..

8) when radical political ideologues place their 19th/20th century academic constructs ahead of real people, morals, rights & civil liberties, tyranny is end result. In the end, these Leftwing radicals are no different from Rightwing Fascist, or the Savage Capitalist, in that…

9) … they really do not seem to care what it costs to realize their grand vision.

It's despotism by another name.

The Covid Rouge
14 Comments
Leave A Reply
Cancel Reply
Telegram Group
AE has a supporting readers Telegram group where we hang out and exchange leads and takes. If you have ever donated to AE drop me a line on email and I'll send you the link to join.
Anti-Bellum
Antiwar.com
Brownstone Institute
Edward Slavsquat
Fourth World
Swiss Policy Research
The New Kremlin Stooge
Read the rules before you think about leaving a message
Anti-Empire