Who Is Going to Risk a $13 Billion Aircraft Carrier in Combat?

The pricetag makes the carrier useless in peer-to-peer combat 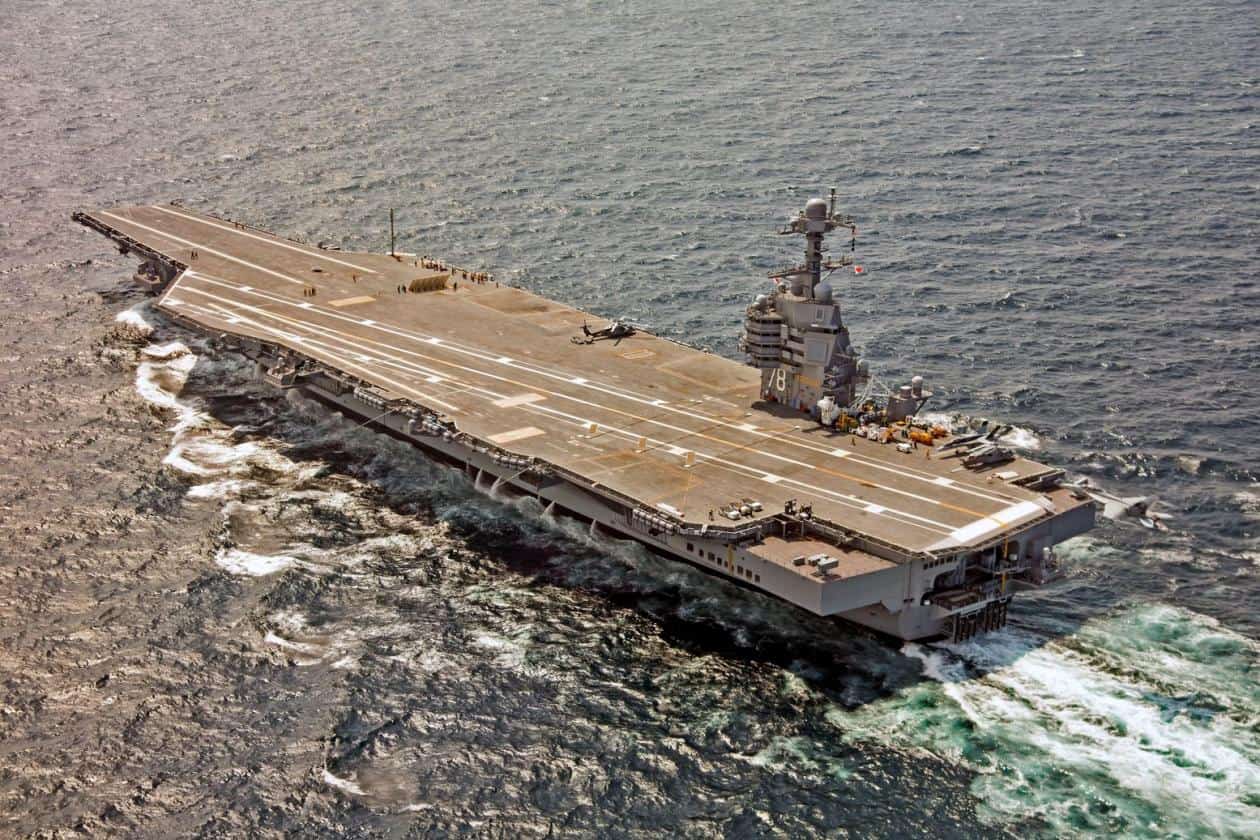 Picture for a moment a scene from the next conflict. The USS Gerald R. Ford (CVN-78) has sustained a critical hit from a Chinese DF-21D (CSS-5 Mod-4) anti-ship missile.

Whether the Ford is lost entirely or merely removed from the fight, the U.S. Navy just lost a $13 billion asset in a matter of seconds.

The financial costs notwithstanding, 2,600 sailors have been put in mortal jeopardy and a massive blow is dealt to U.S. prestige and morale.

For a scenario like this to take place, a good deal must go wrong. The situation is predicated on the defensive ring of a carrier strike group failing to protect the central prize. However, missile defense is based on the unfortunate truth that not all defensive systems will catch all missiles. Simple saturation attacks can defeat even the most advanced systems. As such, it is by no means improbable that carriers will be targeted and hit in the next conflict.

With a range of 900 miles, the DF-21D Chinese missile is perhaps enough to cause second thoughts about the deployment and use of carriers in the South China Sea or the Western Pacific. Additionally, a carrier strike group must contend with the threat of the Chinese People’s Liberation Army Navy. One may conjecture that, given the rate of Chinese military modernization and advancement, the range of acceptable circumstances for a carrier strike group to operate will grow smaller. This leads to an uncomfortable conundrum for the U.S. Navy.

The carrier has been a symbol of naval prestige and U.S. power for nearly 70 years. It has become analogous to the Dreadnought or the battleship in the early 20th century. Yet, like the battleship, the naval meta does not acquiesce in the name of prestige. New technologies and tactics arise to counter these apex vessels, often before their owners become wise to the scheme.

In the Pacific war with Japan, the attack on Pearl Harbor assumed that a decapitation of the U.S. arsenal of battleships would give the Japanese a free hand in the Pacific. However, the U.S. carrier fleet largely remained intact and went on to be a decisive factor in the campaign against Japan, even when they retained the largest battleship put to sea, the IJN Yamato. Similarly, the Bismarck on the other side of the world was ultimately defeated by 16 Swordfish biplane torpedo bombers. The naval meta had shifted beyond the accepted battleship supremacy doctrine before the first shots of World War II.

The question remains if the current meta allows the existence of irresistibly tempting targets like the new Ford-class carrier or indeed any supercarrier. Given the advancement of anti-ship missile technology, saturation attack capability, and the opportunity to knock out a U.S. capital ship, carriers are becoming a liability in a peer-to-peer conflict. Moreover, the capability of submarines to bypass the defensive ring around a carrier as shown by the Swedish submarine HSMS Gotland’s exploits against the USS Ronald Reagan in 2005. While carriers retain unmatched power projection capabilities in conflicts such as the Iraq War or perhaps even a war with North Korea, in an increasingly likely confrontation with China, carriers are simply too big to lose.

By no means should the United States scrap its entire carrier fleet. After the initial salvos of the next conflict, one can predict a bloody war of attrition on the high seas before a clear superior force is established. It is only in this situation, where the surface fleet and the submarine force establish naval superiority and sufficiently suppress shore batteries, that the carrier can again operate with a free hand.

However, this means that the American surface fleet must again become the center of gravity for naval planning and strategy. Sufficient anti-ship missiles to replace the Harpoon, first introduced in 1977, must be pushed to the fleet as soon as possible. The long-range Tomahawk antiship missile is a step in the right direction, but naval procurement must ensure that the missile is pushed to the fleet efficiently and quickly. Next, the Navy should scale back its acquisition program of the new Ford-class carrier and instead allocate the resources toward a legitimate replacement for the aging Arleigh Burke–class destroyers and Ticonderoga-class cruisers.

Wunderwaffen such as the Zumwalt fall into the same trap as the carrier in which they are too expensive and valuable to be used in a manner justifying their exorbitant costs. Finally, and perhaps most radically, the U.S. Navy should reconsider the arsenal ship concept scrapped in the stagnant years of the 1990s. The arsenal ship concept consisted of a ship whose primary functional purpose was to carry missiles. In the original design, the ship would have up to 500 vertical launch cells. The estimated cost, adjusted for inflation, would be $740 million.

Contrasted with the $13 billion of a new carrier and the ability to project a massive amount of power ashore and at sea, the arsenal ship provides a viable substitute for frontline service where the carrier may be too vulnerable or risky. However, these are radical changes and run contrary to decades of doctrine and naval thinking.

In rebuttal, one could say that the world is undergoing a period of radical change that spurns traditional doctrine. Continuity should be recognized for the myth that it is, especially in the churning waters of naval history. As Admiral King wrote, “Nothing remains static in war or military weapons, and it is consequently often dangerous to rely on courses suggested by apparent similarities in the past.”He was met with great opposition to his reforms to outdated organization and bureaucracy. Nevertheless, King ultimately provided necessary challenges to the slow-moving process of adapting to changing times. This is not to compare these ideas to Admiral King’s, but rather evidence that challenging existing orthodoxies is invaluable no matter how controversial. One can hope that either the ideas presented here are dead wrong or that the U.S. Navy can adapt to the coming carrier identity crisis.