Did Biden win more electoral votes than Trump even if we were to count just actually valid votes? Maybe he did, how are we supposed to know? Trump barely won against Hillary, and Biden is a few percentage points less unlikable so maybe he actually pulled it off.

Let’s take a step back and recount what actually happened here.

First, the Democrats and Never Trumpers rewrote election rules. They did so unlawfully via courts, bypassing state legislatures into whose domain they encroached. The rules they set expanded room for attempted fraud and would be comical in a banana republic. Pennsylvania went the furthest in this accepting mail-in ballots for three more days after the election, and without a datestamp.

Next, they crowned Biden and demanded (and received) recognition for him long before the vote was in. What changed on Saturday, November 7th that was so monumental that Biden went from “candidate” to “president-elect,” and the entire network of Empire’s international vassals bowed before him? Absolutely nothing. Except for the fact that at this time the Associated Press and therefore Google, LLC “called” Biden as the winner. (All the while being so ‘cautious’ as to not call the massive ‘swing state’ that is Alaska for several more days.)

Congratulations @JoeBiden and @KamalaHarris. Joe, we’ve had a long & warm personal relationship for nearly 40 years, and I know you as a great friend of Israel. I look forward to working with both of you to further strengthen the special alliance between the U.S. and Israel.

Finally, again relying on the anti-Trump judiciary additionally cowed by the regime media, they stonewalled investigations and meaningful audits of the vote. There is a certain level of fraud in every US election. And this was the very first election of its kind, with 65 million mail-in votes and more room for attempted fraud than ever. You might think it would therefore warrant more inspection than ever. You might also think anti-Trumpers might be highly interested in having such inspections take place, and remove any shadow of a doubt from their guy and further humiliate Trump. Instead, they shouted just wanting to double-check AP’s call was a form of national treason, and got away with that.

So then, what exactly do you call it, when:

You call that a coup d’etat.

I’m sorry but the US in 2020 is no longer a democracy. Not even in the very limited sense it was before. Demonstrably the electorate no longer decides who ascends to the Presidency. At least when one of the candidates is an outsider to the bipartisan permanent regime.

In the 2000 US-backed color revolution (the very first one) that overthrew Slobodan Milošević, protesters accused the latter of stealing an election, then burned the ballots and therefore prevented a recount that he had just agreed to. Who actually won that vote? Who knows? Who cares?

The US 2020 vote has been similarly meaningless, as had similarly been decided ahead.

The permanent regime carried out a coup against a democratic election before our eyes. Whether the coup was against an election won by Biden or Trump is immaterial.

Physical confrontation has now begun.
There are now credible reports of an F16 downed by a Chinese laser weapon up near the Canadian border and of 50,000 chinese troops, invited in by Trudeaux,being taken out with bunker busting bombs on land owned by Democrat Senators.
Then we have the Chinese money that has flooded and corrupted the Political Classes – notably the Biden family along with heavy technical infiltration of the Dominion voting machines.
See here:https://www.brighteon.com/67097c93-448c-4d04-92d9-7ddd2fc066e5
And go to Steve Quales website for more detailed information

The Globalist Cabal and their machinations have been undone by Trump and now they are escalating the action to move forward the plans for the takeover of America,originally scheduled for 2024.
The tip of the spear will of course be China with their Jewish-Communist Worldview. Their Military will be the new world SuperPower. Progressive inflitration of the USA while all have been focused on the Russian Threat ( not ), enables embedded traitors of the Constitution of the USA ,to weaken and disown that Constitution in the minds of a compliant mass of “Dependables” who have cheerleaded the Biden Election Fraud.

My feeling is that Trump has finessed the Globalist Cabal into premature action and he has prepared diligently his loyal Military for the moment in History.

yeah USA invades and attacks Syria, Afghanistan, Iraq(twice) Sudan, Ethiopia, has over 1000 military bases around the world, places sanctions on Russia, Venezuela, Iran etc, causes mass starvation in Yemen but it’s the Communist China who is the bad guy while Capitalist USA/West have caused the deaths of billions around the world in Africa, Asia, Australia, North, Central and South America.

Are you a bot or are you REALLY that stupid?

So in your mind – all that is an excuse to Communise the USA by stealth, rig the elections and use a remodernised China ( with American Money ) to rearm and use as your private army of Globalist control?

If you really can’t see how a better “system ” employed by a hamstrung Trump rejuvinated American in only 4 years against strong headwinds and a bent CIA and FBI in the upper echeleons then you dear Dem are the one with Mush for brains.

Go live in Beijing if you love them so much. Americans respect their much denigrated Constitution by over 75 million people.

…and you definitely are a Bot.

Bill the eighth
#2832
Reply to  plamenpetkov

you sound confused. what you describe is the doing of the elites or permanent regime when good office boy-presidents like Clinton, Obama, and Bush held office Trump starved the Neocons of any new wars and all that 1000 military bases, mass starvation Yemen blah blah cannot be alluded to Trump

yeah Biden is all lies while poor trump is an awesome guy who had the election stolen from him, the poor dearie. Boohooohoo. if only trump had a 2nd term, he would have destroyed the Deep state, Boohohoo.
What a perfectly idiotic article.

DOesnt matter who wins in USA. You dont even understand simple things such as these? At least the Democrats gave health care to 20 million Americans with the Obama care. What has Trump given to USA? the biggest tax cut to the rich and stock market driven by the Fed.

How idiotic can you be, man?

Bill the eighth
#2813
Reply to  plamenpetkov

You keep taking idiocray to a new and unusual maximum.

The Supremo’s decided not to get involved with the lawsuits from Texas and other states which was the sole reason for their existence and totally unconstitutional but no one really pays attention to the supreme law.

I haven’t voted in years because of all the corruption. Your vote DOES NOT count in a banana republic which is what the USA is these days. One could see the cheating from February on using the fake virus.

Some think secession or a civil war is imminent. I don’t as too many of younger Americans have been schooled 24 & 7 from Kindergarten to University that they deserve it all free. Today the government is destroying the currency in order to deliver. With the commies in control the USA as a free nation is history. Remember,,, even the USSR lasted 70 years.

As Old Joe, Stalin that is, said, “Who votes is not nearly as important as who counts the votes.” In this election I voted for the only honorable man who was running, Kanye West. When a racially aware White guy like me does that we know the republic is in peril.

you have to vote irrespective. Biden cheated and there are options to bring him to book even after the courts fail. But if enough people followed your example, Biden wouldn’t have to cheat in the first place

Who cares who was declared when. Trump himself declared victor at some point and no one was crying for the overturn of the national electoral system. ?Trump is an idiot and a leader of more.

Where do you think you are living? US “elections” have been rigged since 1788. The party nominations-“primaries” have always been rigged. There is no “popular choice.”

In the 2000 US-backed color revolution (the very first one) that overthrew Slobodan Milošević, protesters accused the latter of stealing an election, then burned the ballots and therefore prevented a recount that he had just agreed to.

The reference to Milošević is out of context. In Yugoslavia, the election had 2 thresholds: 60% of the eligible voters had to vote; and the winning candidate must have 50%+1 of the votes cast. There were 3 candidates. Those in charge of the elections said more than the required 60% had voted but the candidate with the most votes, Vojislav Kostunica, did not attain the simple majority of 50% +1. It never said Milošević had won, It said a run-off election was necessary. It should be noted that if Milošević had actually believed he would have won the run-off election, he certainly would not have withdrawn from the runoff election.

I won’t quibble about Yugoslavia being the first,other than to say that Yugoslavia was the final product after the practice runs in Bulgaria and Romania were tweaked.

I have to disagree. Trump didn’t barely beat Hillary. No doubt that similar massive voter fraud was in her favor just not quite enough for her to win. That is why this time they took no chances and frauded every which way they could.

The good news is this will hasten an actual physical conflict in the USA. Some people don’t listen to please and thank you. You have to grab them by the ears.

If that’s what the minions of the Globalists want, I suppose that’s what they’re going to get. At some point, the American people stop tolerating being treated with disrespect.

Part of what I posted on another thread applies…

The elites might eventually find themselves trying to desperately prevent secession or civil war, though. Their options for distracting the restless peasants are narrowing as the peasants grow tired of “Russians”, “Chinamen”, “Deadly Virus”, “fascist white crackers”, and “commie black ni–ers”. Wake up, peasants. Threaten CNN. Threaten corporate think tanks and headquarters. Threaten both Big Party Headquarters. Threaten Raytheon and Boeing. Threaten Wall Street. Threaten and picket the Israeli embassy. THEN you will see change.

I don’t see that happening. Americans bent over for the “Patriot Act” and keep bending over for TSA Stasi. Just walking outside and looking at all obedient human resources wearing face panties will tell you that Americans don’t have a rebellious spirit. 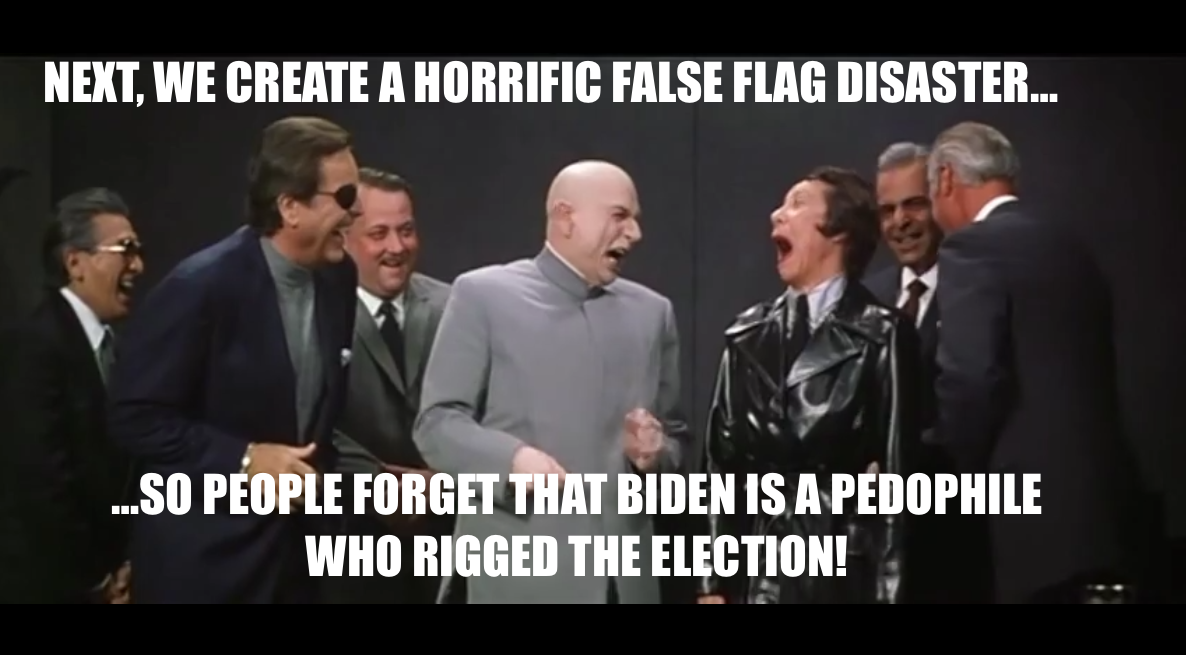