What Does It Mean for a Virus to Become ‘Endemic?’

"If we fail to recognize when Covid becomes ‘endemic’ and move on, society will be stuck in lockdown until 2023" 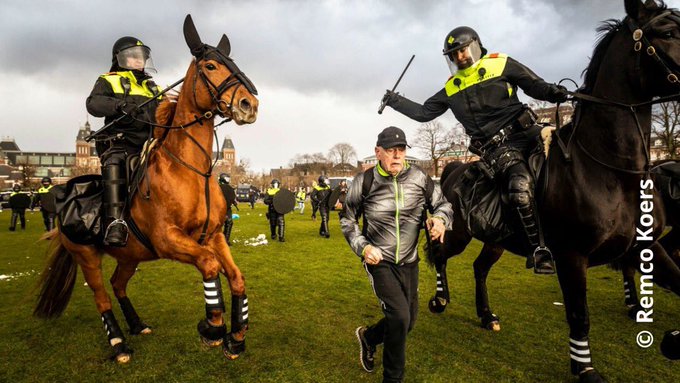 We already forgot we flattened the curve to allow hospital capacity to increase. The supposed purpose of the lockdowns was not to stop the virus but merely to better ration medical resources.

We already overlooked the common sense espoused by the Great Barrington Declaration.

We already missed the opportunity vaccines offered for us to rehabilitate social interaction and the economy.

And now, if we fail to recognize when Covid becomes ‘endemic’ and move on, society will be stuck in lockdown until 2023.

Even if you lock down society for two weeks (or two months) — it won’t make a difference. Covid is not going away any time soon. In fact, it is going to remain a part of our lives. Medical professionals are beginning to recognize Covid will likely join the growing list of endemic diseases.

Even Joe Biden hinted in this direction in what is one of the frankest admissions from any elected official in the last 10 months: “There’s nothing we can do to change the trajectory of the pandemic in the next several months.”

A disease is considered endemic when it is regularly found among particular populations or in a certain geographic area, and is “constantly maintained at a baseline level […] without external inputs.” Endemicity means predictable and manageable.

Polio was endemic. Chickenpox is endemic worldwide. HIV is endemic in the US. Ebola is endemic to the DRC, while Malaria remains endemic across various parts of Africa, Asia and Latin America.

Covid-19 will be the fifth human coronavirus to eventually reach an endemic state. The other four coronaviruses — such as those that cause colds — offer short-term immunity lasting about a year. However, a recently released study indicates Covid-19 immunities last at least 8 months, or for years.

Graham F. Medley from the London School of Tropical Hygiene, and coauthor Anna Vassall differentiate epidemic and endemic diseases, and describe the former as “typically hav[ing] higher mortality and morbidity than endemic diseases, owing to lack of clinical experience and knowledge, as well as innate pathogenicity.” When emerging diseases become endemic, Medley and Vassal say,

[T]hey become increasingly tolerated, and the locus of responsibility may shift to the individual. Rather than public authorities actively detecting cases and subsidizing risk protection, people may be increasingly encouraged to pay for the means to manage their own risk and seek care.

A fellow London School Professor and chair of WHO’s Strategic and Technical Advisory Group for Infectious Hazards, Dr. David L. Heymann, says Covid will likely become endemic — and continue to mutate, much like the coronaviruses we already have and for which new flu vaccines are developed each year.

Despite numerous and extensive restrictions — including travel restrictions preventing the introduction of new cases, capacity limits and bans on large gatherings to prevent transmission — Covid has maintained a constant presence in many countries. Covid is not necessarily ‘hyperendemic’ with persistently high levels of occurrence as this article describes, but fluctuates during colder months similarly to fluctuation seen with flu.

Covid’s continued presence — and increasing levels of herd immunity through vaccines and natural infection used in the strict, technical definitions of ‘endemic’ in epidemiological SIR models — despite lack of inputs means it should soon be considered endemic.

The possibility for Covid to become endemic was acknowledged as early as May 13, 2020, by Executive Director for the WHO Health Emergencies Program, Dr Michael Ryan [at 1.02.06]:

I think it’s important to put this on the table: this virus may just become another endemic virus in our communities. And this virus may never go away. HIV has not gone away, but we’ve come to terms with the virus, and we have found the therapies and we have found the prevention methods, and people don’t feel as scared as they did before. And we’re offering life — long, healthy life — to people with HIV. And I’m not comparing the two diseases, but I think it is important that we be realistic. And I don’t think anyone can predict when or if this disease will disappear.

His response illustrates that a great part of a disease becoming ‘endemic’ requires society coming to terms with it. The sooner we recognize Covid as endemic, the sooner we can overcome this unfettered hysteria.

There’s one problem: testing. If we continue to tolerate vast numbers of false positives, we create the illusion of a continued crisis even when the reality is otherwise. Alternatively, these false numbers may trick us into believing that a disease has reached an endemic state when it hasn’t yet.

amplif[y] genetic matter from the virus in cycles; the fewer cycles required, the greater the amount of virus, or viral load, in the sample. The greater the viral load, the more likely the patient is to be contagious.

Throughout Covid, most tests have been processed at 40 cycles, some as high as 45 and some at 37. But the number of cycles used is generally omitted from results provided to patients and doctors. Virologist Juliet Morrison was “shocked” that results from tests with such high cycles were used to represent a “positive” result. Dr. Mina agreed,

Tests with thresholds so high may detect not just live virus but also genetic fragments, leftovers from infection that pose no particular risk — akin to finding a hair in a room long after a person has left.

According to The Times, even the CDC acknowledged last year that, “It is extremely difficult to detect any live virus in a sample above a threshold of 33 cycles” and stated the agency would collaborate with the FDA about threshold measures “for policy decisions.”

This overabundance of caution in testing has led to a ten-fold overestimate of cases nationwide: Mandavilli says that out of 45,604 cases perhaps only 4,500 have significant enough proportions of the virus to be considered infectious.

A review at the Wadsworth Center (New York’s state lab) sponsored by The Times to reexamine 872 positive tests that were previously processed at a threshold of 40 cycles, found that at a lower threshold of 30 cycles (a more moderate rate), over 60% of cases would no longer be deemed positive. Additionally, their review found that,

In three sets of testing data that include cycle thresholds, compiled by officials in Massachusetts, New York and Nevada, up to 90 percent of people testing positive carried barely any virus.

Providing information on cycle thresholds to patients and doctors could improve advice given to individuals regarding whether to self-isolate, and substantially reduce the need for contact tracing.

Reducing PCR threshold cycles to normal, reasonable levels of, say, under 30 cycles would go a long way in excluding false positive results which pick up on genetic fragments of dead virus. This would lower case numbers to more accurately reflect the number of infectious individuals in society as well as the numbers of deaths with Covid currently being misrepresented as from Covid.

By comparison to the previous year’s headlines, the media would no longer be able to act as a foghorn of fear-mongering. Citizens could become increasingly tolerant of the virus, and responsibility for personal risk and decisions to access medical care will once again belong to individuals.