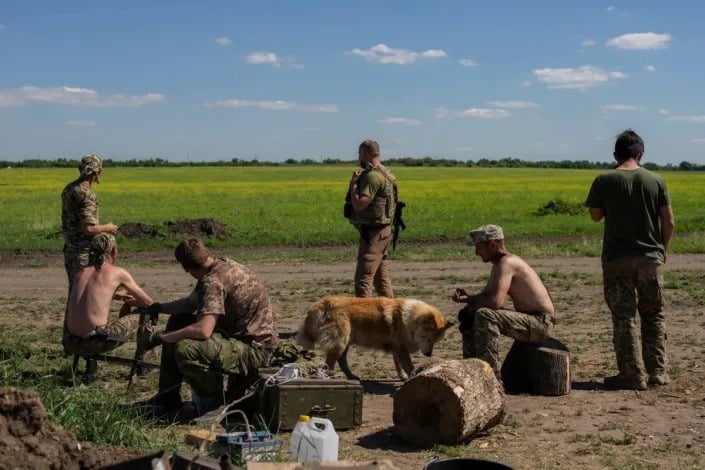 Editor’s note: There’s is a synchronized offensive to pressure DC into delivering more support uniting Kiev and the Western media — and now Ukrainian and Western intel agencies working in concert. There has been a small avalanche of articles like this recently that emphasize how grim things look for the Ukrainains if they don’t receive Western arms soon. What sets this one apart is that Western and Ukrainian intel indirectly helped wrote it. (The article retells the findings of an intel report that was basically written to explain why Ukraine needs American rocket artillery and now.) 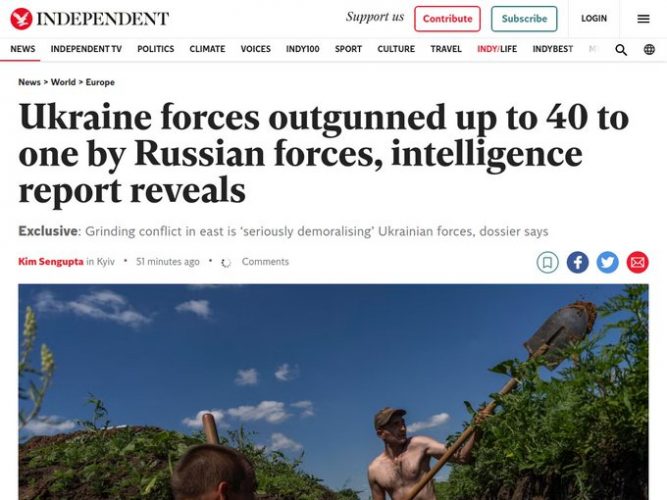 Ukrainian troops are suffering massive losses as they are outgunned 20 to one in artillery and 40 to one in ammunition by Russian forces, according to new intelligence painting a bleak picture of the conflict on the frontline. [That’s normally called “ammunition expenditure”. 40-to-1 is huge. I wonder if this isn’t an exaggeration given the incentives.]

A report by Ukrainian and Western intelligence officials also reveals that the Ukrainians are facing huge difficulties responding to Russians shelling with their artillery restricted to a range of 25 kilometres, while the enemy can strike from 12 times that distance. [Apples and oranges. Comparing howitzers to guided missiles.]

For the first time since the war began, there is now concern over desertion. The report, seen by The Independent, says the worsening situation in the Donbas, with up to a hundred soldiers being killed a day, is having “a seriously demoralising effect on Ukrainian forces as well as a very real material effect; cases of desertion are growing every week”.

Even with Russia's material advantages, a 20:1 advantage in artillery (40:1 in ammunition) on Russia's side would entail a complete, rapid collapse of Ukrainian lines. There would not be enough Ukrainian artillery to even conduct artillery skirmishes. /2

At the same time, as the Russians capture territories in the east, and consolidate their control over the seized cities of Mariupol and Kherson, the bargaining position of the Ukrainian government is being weakened by acute disparity in the numbers of prisoners being held by each side.

The total number of Russian soldiers being held by Ukraine has fallen to 550 from 900 in April after a series of exchanges. Moscow meanwhile has more than 5,600 Ukrainian troops in captivity, the figure enlarged by the surrender of 2,500, including members of the Azov Battalion, in Mariupol.

This difference in numbers between the two sides is being revealed as both Kyiv and Moscow hold highly-publicised trials of prisoners of war.

Two Britons, Aiden Aslin and Shaun Pinner, who were captured serving with Ukrainian forces in Mariupol are on trial in the separatist Donetsk People’s Republic, where prosecutors say they face the death penalty for “terrorism” and being “mercenaries”.

Russian state media announced on Wednesday that more than 1,000 Mariupol prisoners have been transferred to Russia for “investigation.” Politicians in Moscow and the separatist republics have threatened to carry out “Nuremberg-type” trials of the Azov prisoners who they accuse of being neo-Nazis.

Ukraine’s president, Volodymyr Zelensky, making a visit to the frontline in Donbas on Monday, demanded the Kremlin hand over the Mariupol prisoners. Negotiations are ongoing, he said, but “they are unfortunately in the hands of the Russian Federation, which cannot be trusted”.

The intelligence report says: “Russians insist on a one-to-one prisoner exchange. This means that under the status quo, 4,500 Ukrainian prisoners may be in Russian jails until there is a peace deal. Moscow is likely to use this as a lever to internally destabilise Ukraine unless there is social protection for their families and clear communications.”

The assessment was compiled before the announcement by the British government that it will supply a small number of M270 multiple-launch rocket systems, but after the reported US supply of Himars truck-based mobility rocket systems.

Britain is sending only three of the systems for the time being, and Washington has sent four. Ukrainian officials say they need much more to halt the Russian advance, let alone reclaim lost territory, and that it will take time to deploy the systems to the frontline while the Kremlin continues its fierce offensive in the Donbas.

“We are, of course, very grateful to our allies for their support,” said one Ukrainian official. “The new weapons are welcome, but when they announce they are sending military aid to Ukraine, the Western government should perhaps clarify to their public the quantities involved.”

Reporting on the ground backs up claims of rising Ukrainian losses due to Russian firepower. The Independent last week witnessed losses being inflicted on the Ukrainian military and the lack of long-range firepower to fight back; one soldier interviewed in Lysychansk has since been killed and another three injured.

The intelligence report states: “It is plain that a conventional war cannot be won if your side has several times fewer weapons, your weapons hit the enemy at a shorter distance and you have significantly less ammunition than the enemy.”

“The tactical situation on the Eastern front is as follows… the Ukrainian side has almost completely run out of stocks of missiles for MLRS of Smerch and Uragan types, which made it possible to effectively deter Russian offensives in the first months of the war at distances of 60 to 80 km.

“Today, the maximum range of fire of the Armed Forces of Ukraine is 25 km. This is the range at which 152/155mm calibre artillery and the Grad MLRS units remaining in service can fire.”

“At the same time, the enemy strikes at concentrations of Ukrainian forces from a distance of 300 km with Iskander tactical ballistic missiles, 70 to 80 km using the Smerch MLRS and Tochka-U, from 40 to 60 km using MLRS Uragan.”

[That they’re run out of Smerch and Uragan rockets could be true, but it also sounds suspiciously like an argument tailor-made to force US’ hand into delivering more M270.]

“This creates a situation of absolute inequality on the battlefield, not to mention the complete dominance of enemy aircraft in the air, which can only sometimes be corrected by the use of the Stinger and mistakes of Russian pilots.”

The assessment warns that the Russians are fully aware that a relatively small number of Western weapons have been sent and the delivery into combat positions is slow. “The Russians are seeking to utilise their advantage in the time they have by using their artillery to try and break through Ukrainian defences in the Donbas,” it says.

It stresses that Javelin and NLAW anti-tank systems supplied by the US and UK have proved effective in the battlefields around Kyiv and Kharkiv and remain so in the Donbas. Switchblade attack drones have also inflicted significant damage on the Russians.

However, it points out that anti-tank weapons “cannot counter Russian artillery and rocket launchers”.

“The enemy is encircling Ukrainian forces concentrated in Severodonetsk and Lysychansk,” it says. “It has become extremely difficult to defend these two cities, since the enemy exercises 80 per cent fire control on the roads transporting supplies.”