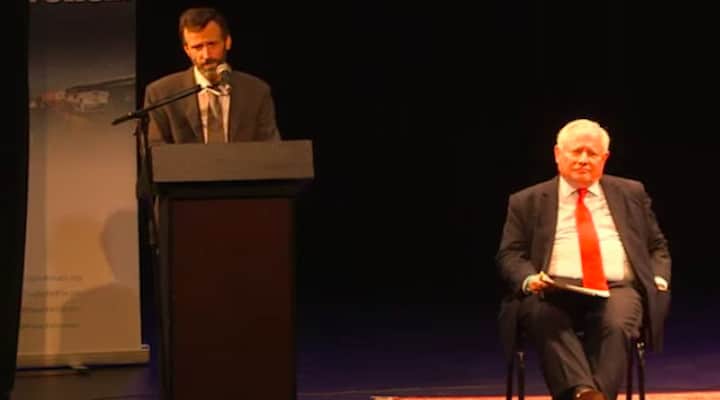 An important and long-overdue debate has occurred between Iraq-raping arch-neocon Bill Kristol and the tireless libertarian war critic Scott Horton on the subject of US interventionism, and you should definitely drop whatever you’re doing and watch it immediately.

The resolution up for debate was “A willingness to intervene, and to seek regime change, is key to an American foreign policy that benefits America,” with Kristol obviously arguing in the affirmative and Horton in the negative.

The winner of the debate will be obvious to anyone watching. Horton plowed through criticisms of the way US foreign policy is constantly “creating its own disasters it must then attempt to solve” from his encyclopedic knowledge of interventionist bloodbaths and their undeniable repercussions while Kristol appeared frequently flustered, passed on multiple rebuttals, and got called on blatantly false claims.

Horton rattled off nations, dates and death tolls in rapid succession and repeatedly referenced Kristol’s own role in imperialist bloodshed, while Kristol relied almost entirely on insubstantial assertions to defend his position that “we can be at once a republic and a liberal empire” and empty dismissal of Horton’s points about the destructive nature of various US foreign interventions.

In the end a deflated-looking Kristol gave closing remarks which amounted to little more than whining that Horton’s position doesn’t assume war hawks like himself are acting “in good faith”, while Horton’s closing statement just continued his blistering assault.

By the end of it you almost feel bad for old Bill.

The audience unsurprisingly sided overwhelmingly with Horton by a significantly greater margin at the end of the debate than the beginning. The only unanswered question when all was said and done was, how the hell did Kristol get it in his head that entering this debate was a good idea?

One can only assume hubris. Hubris arising from a life in an elitist echo chamber where his warped views are seldom challenged, and continual marination in the kind of unearned validation that only Beltway swamp monsters ever receive.

So watch and enjoy, folks. Participating in this kind of humiliating debate is not a mistake that any high-profile neocon is likely to repeat anytime soon.