The era of the U.S. dollar’s “exorbitant privilege” as the world’s primary reserve currency is coming to an end. Then French Finance Minister Valery Giscard d’Estaing coined that phrase in the 1960s largely out of frustration, bemoaning a U.S. that drew freely on the rest of the world to support its over-extended standard of living. For almost 60 years, the world complained but did nothing about it. Those days are over.

Already stressed by the impact of the Covid-19 pandemic, U.S. living standards are about to be squeezed as never before. At the same time, the world is having serious doubts about the once widely accepted presumption of American exceptionalism. Currencies set the equilibrium between these two forces — domestic economic fundamentals and foreign perceptions of a nation’s strength or weakness. The balance is shifting, and a crash in the dollar could well be in the offing.

The seeds of this problem were sown by a profound shortfall in domestic U.S. savings that was glaringly apparent before the pandemic. In the first quarter of 2020, net national saving, which includes depreciation-adjusted saving of households, businesses and the government sector, fell to 1.4% of national income. This was the lowest reading since late 2011 and one-fifth the average of 7% from 1960 to 2005.

Lacking in domestic saving, and wanting to invest and grow, the U.S. has taken great advantage of the dollar’s role as the world’s primary reserve currency and drawn heavily on surplus savings from abroad to square the circle. But not without a price. In order to attract foreign capital, the U.S. has run a deficit in its current account — which is the broadest measure of trade because it includes investment — every year since 1982.

Covid-19, and the economic crisis it has triggered, is stretching this tension between saving and the current-account to the breaking point. The culprit: exploding government budget deficits. According to the bi-partisan Congressional Budget Office, the federal budget deficit is likely to soar to a peacetime record of 17.9% of gross domestic product in 2020 before hopefully receding to 9.8% in 2021.

A significant portion of the fiscal support has initially been saved by fear-driven, unemployed U.S. workers. That tends to ameliorate some of the immediate pressures on overall national saving. However, monthly Treasury Department data show that the crisis-related expansion of the federal deficit has far outstripped the fear-driven surge in personal saving, with the April deficit 5.7 times the shortfall in the first quarter, or fully 50% larger than the April increment of personal saving.

In other words, intense downward pressure is now building on already sharply depressed domestic saving. Compared with the situation during the global financial crisis, when domestic saving was a net negative for the first time on record, averaging -1.8% of national income from the third quarter of 2008 to the second quarter of 2010, a much sharper drop into negative territory is now likely, possibly plunging into the unheard of -5% to -10% zone.

And that is where the dollar will come into play. For the moment, the greenback is strong, benefiting from typical safe-haven demand long evident during periods of crisis. Against a broad cross-section of U.S. trading partners, the dollar was up almost 7% over the January to April period in inflation-adjusted, trade-weighted terms to a level that stands fully 33% above its July 2011 low, Bank for International Settlements data show. (Preliminary data hint at a fractional slippage in early June.)

But the coming collapse in saving points to a sharp widening of the current-account deficit, likely taking it well beyond the prior record of -6.3% of GDP that it reached in late 2005. Reserve currency or not, the dollar will not be spared under these circumstances. The key question is what will spark the decline?

Look no further than the Trump administration. Protectionist trade policies, withdrawal from the architectural pillars of globalization such as the Paris Agreement on Climate, Trans-Pacific Partnership, World Health Organization and traditional Atlantic alliances, gross mismanagement of Covid-19 response, together with wrenching social turmoil not seen since the late 1960s, are all painfully visible manifestations of America’s sharply diminished global leadership.

As the economic crisis starts to stabilize, hopefully later this year or in early 2021, that realization should hit home just as domestic saving plunges. The dollar could easily test its July 2011 lows, weakening by as much as 35% in broad trade-weighted, inflation-adjusted terms.

The coming collapse in the dollar will have three key implications: It will be inflationary — a welcome short-term buffer against deflation but, in conjunction with what is likely to be a weak post-Covid economic recovery, yet another reason to worry about an onset of stagflation — the tough combination of weak economic growth and rising inflation that wreaks havoc on financial markets.

Moreover, to the extent a weaker dollar is symptomatic of an exploding current-account deficit, look for a sharp widening of America’s trade deficit. Protectionist pressures on the largest piece of the country’s multilateral shortfall with 102 nations – namely the Chinese bilateral imbalance — will backfire and pert trade to other, higher-cost, producers, effectively taxing beleaguered U.S. consumers.

Finally, in the face of Washington’s poorly timed wish for financial decoupling from China, who will fund the saving deficit of a nation that has finally lost its exorbitant privilege? And what terms — namely interest rates — will that funding now require?

Like Covid-19 and racial turmoil, the fall of the almighty dollar will cast global economic leadership of a saving-short U.S. economy in a very harsh light. Exorbitant privilege needs to be earned, not taken for granted.

Stephen Roach, a faculty member at Yale University and former chairman of Morgan Stanley Asia, is the author of “Unbalanced: The Codependency of America and China.” 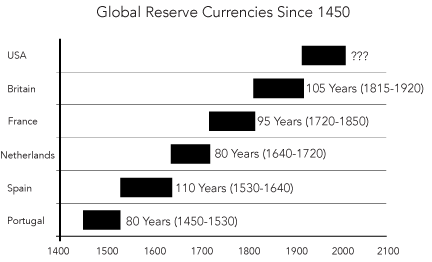 [Former Texas Congressman Ron] Paul warned in his 2008 book “Revolution: A Manifesto” that when the Fed takes stimulative action, “it creates all kinds of economic problems. It decreases the value of the dollar, thereby making people poorer,” he wrote.

“When the money supply is increased, prices rise–with each dollar worth less than before, it can purchase fewer good than it could in the past,” he added. “The average person is silently robbed through this invisible means.”

Yet after three rounds of quantitative easing, in which the Fed directly created money to buy bonds in the open market, inflation has remained quiescent, with deflation often posing the more realistic threat.

That leaves Paul waiting for the fulfillment of the other half of his 2008 prediction; namely that “in the long run, even the apparent stimulus to the economy that comes from all the additional borrowing and spending turns out to be harmful has well, for this phony prosperity actually sows the seeds for hard times and recession down the road.”

We’re now in a fourth round of quantitative easing. We’ll be seeing what the future brings — in terms of SHOCK? — soon enough.

greatly commented……I do fully agree with your assessment and conclusion