No leaving even for food 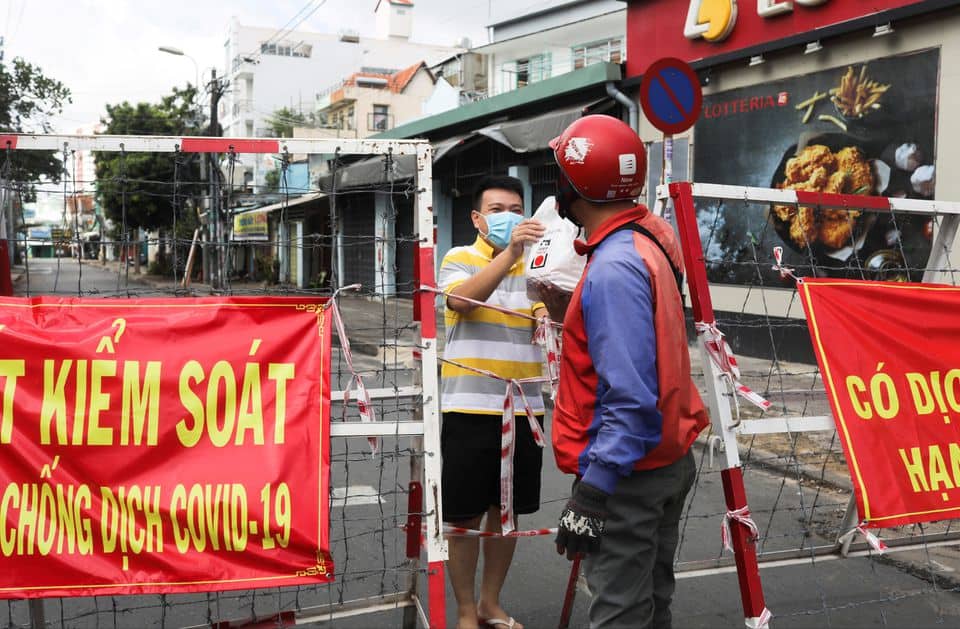 Until this summer, Vietnam was a Covid success story.

Many Americans still think of Vietnam as a poor country of rice farmers. In fact, Vietnam’s economy has surged since 2000 as it picks up manufacturing priced out of China, its historic foe to the north. Fewer than 10 percent of Vietnam’s 100 million people now fall below the global poverty line.

Like China, Vietnam has a nominally Communist government better described as pro-growth and authoritarian. And like China, Vietnam moved aggressively to contain the coronavirus last year with apparent success.

In 2020, Vietnam reported fewer than 1,500 Covid cases and 35 deaths. In a March 2021 article, a group of academics – inevitably supported by the Bill and Melinda Gates Foundation – bragged that Vietnam’s early lockdowns and aggressive contact tracing program deserved the credit.

Just how aggressive? Vietnam detained 4.3 million people in centralized quarantine centers in 2020, and quarantined another 6 million at home.

It also closed its borders to nearly all international travel and created a phone app that includes “allows users to declare their own health status, report suspected cases, and watch real-time movement of people placed under quarantine.”

In other words, an automated snitching program that would have made Orwell proud.

You also may not be surprised to hear that Vietnam cracked down on “misinformation” about Covid, too. “The government was on the lookout for misinformation from the very beginning… [and has] a specific decree outlining fines for people who use social media to ‘share false, untruthful, distorted, or slanderous information.’” 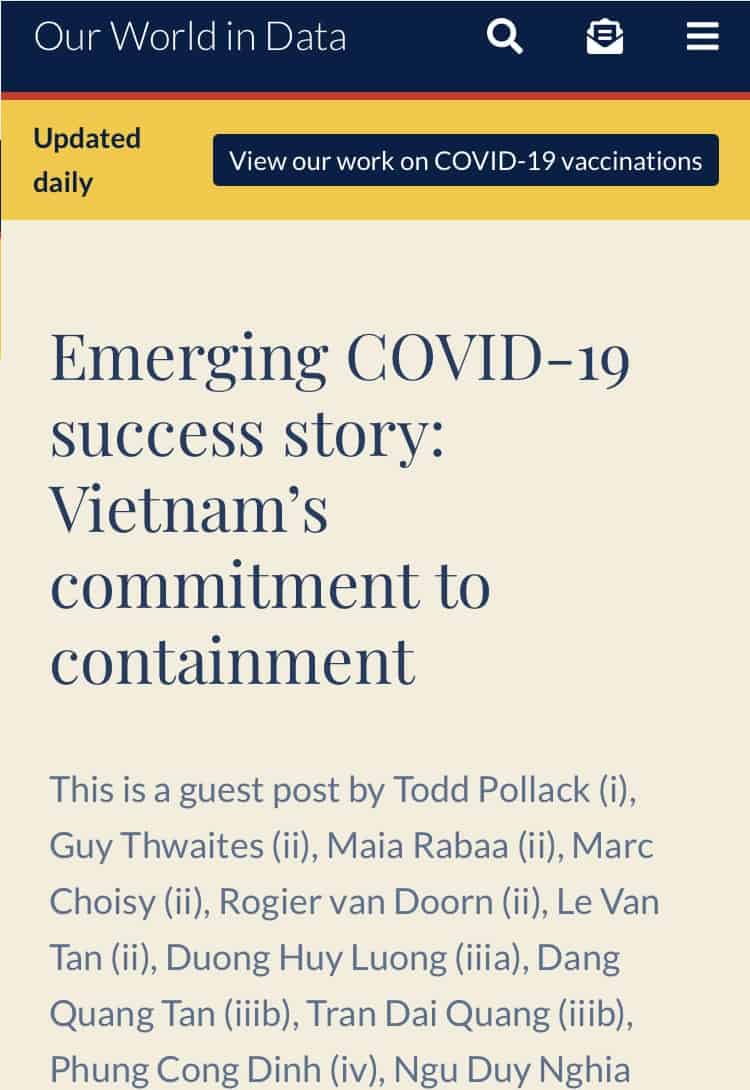 But Vietnam’s success at containing Covid abruptly ended this spring.

Its coronavirus epidemic began in May and exploded in late June. Since then, cases have risen 25-fold. On Friday, Vietnam reported more than 17,000 cases, its most ever – more than 10 times as many as it had in all of 2020.

Deaths are soaring too. Over the last week, Vietnam has averaged more deaths per-capita than the United States. 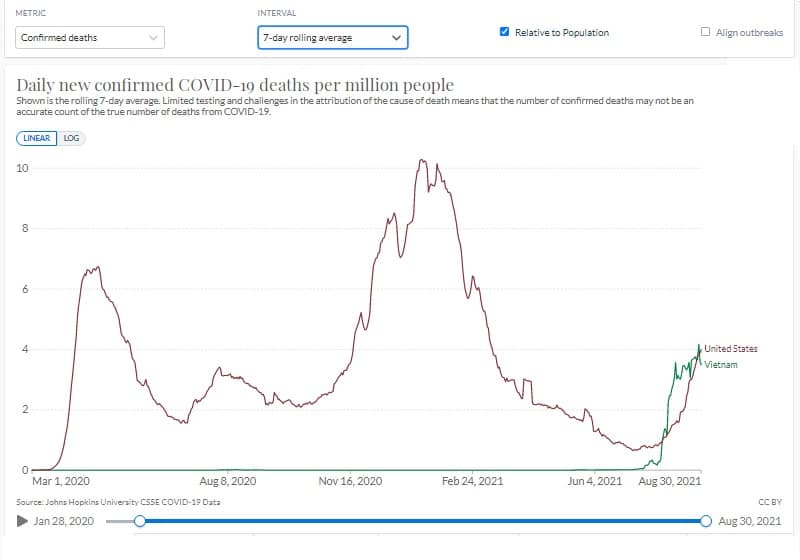 With this number of cases, individual contact tracing is effectively impossible, even for a centralized and authoritarian state. So Vietnam has implemented far more aggressive lockdowns than it did last year, including bringing in soldiers to enforce quarantines in the southern metropolis of Ho Chi Minh City (formerly Saigon). 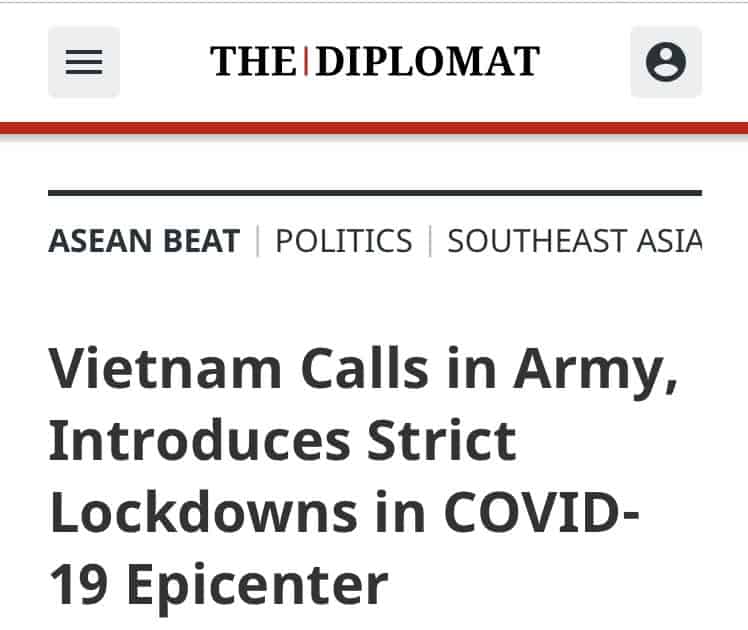 As Reuters reported on August 26: “Vietnam has deployed soldiers to the streets of Ho Chi Minh City to help enforce the country’s strictest movement curbs yet which prevent people from leaving home, even for food.”

Apparently this plan… has a few flaws.

As a reader wrote in this morning:

“Areas in the red zones are not allowed to shop at supermarkets for two weeks. Supposedly their plan was to have the military do the shopping for you and they can deliver it at your doorstep…

“As you can surmise, it’s a nightmare. [There is now] a mobile app for food and essential stuff but the supermarkets are inundated with orders it can’t cater to everyone. So much for the military doing the shopping…”

Where all this goes remains to be seen. Presumably the Vietnamese government will not starve its citizens to death to reduce case counts for a virus that roughly 997 out of every 1,000 people survive. (Though, at this point, who can be sure?) But the Vietnamese economy and global clothing and shoe supply chains are already starting to feel the pinch.

But maybe the biggest question of all remains unanswered: why now?

Inevitably, the media and government are blaming the Delta variant. But the variant was widespread worldwide well before the explosion in cases Vietnam saw two months ago.

But Vietnam did see one big change this summer: the beginning of a mass vaccination program. Vietnam didn’t depend on Chinese vaccines, either (not surprising, given the long history of conflict between the two countries). It has mostly used the AstraZeneca DNA/AAV vaccine, along with the Pfizer and Moderna mRNA vaccines – the same trio that have dominated Europe.

As of early June, almost no one in Vietnam was vaccinated. Today, almost 20 percent of the country has received at least one dose. 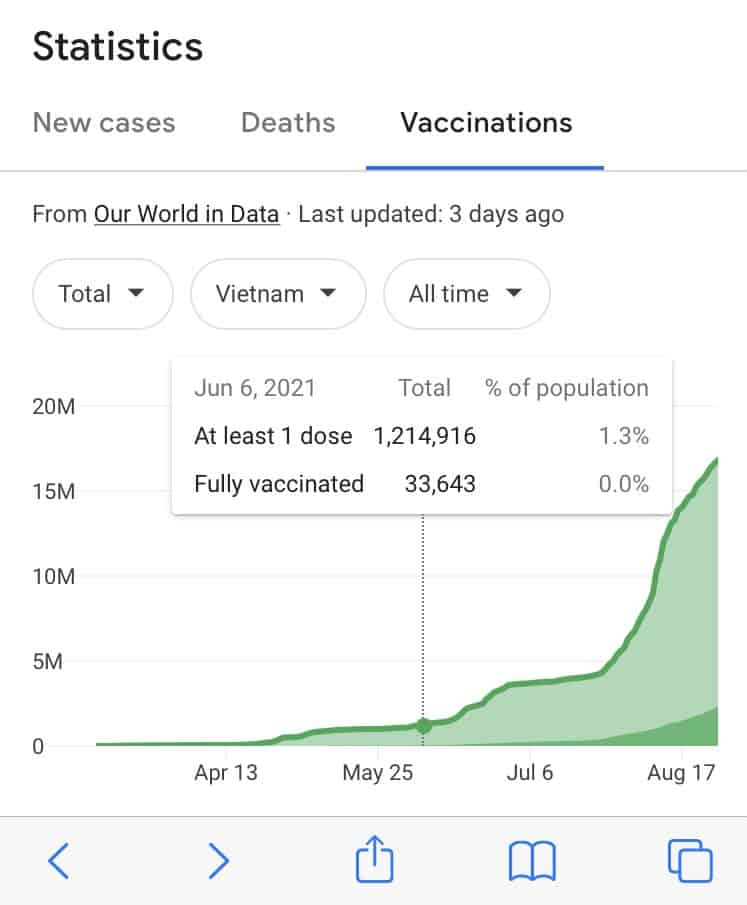 The pattern is exactly the same as we saw in Israel and Britain in January, and many other countries over the spring. The first dose of mass vaccination campaigns is associated with a huge spike in cases.

Too many countries have seen this trend for it to be called coincidental. The question is what’s causing it. Possibilities include post-vaccine behavioral changes (hot vaxxed summer!), vulnerable people clustering together at vaccination sites, or (most likely) some short-term vaccine-driven suppression of the immune system.

Given that we know now peak mRNA vaccine protection lasts a matter of months at most, the post-first-dose spike is even more important in judging the costs and benefits of vaccines. But vaccine advocates will not even acknowledge the existence of the post-first-dose spike, much less admit that it leaves the case for mass vaccinations even murkier than before.

Whether they choose to admit the truth or not, Vietnam’s experience proves again that virus gonna virus. Extreme measures may temporarily delay the spread of Sars-Cov-2 (at enormous cost to civil liberties). But without a permanent and effective vaccine, every country – and every person – will eventually be exposed. And right now, we are nowhere near a permanent and effective vaccine.

I’d say all of this on Twitter, but I can’t. 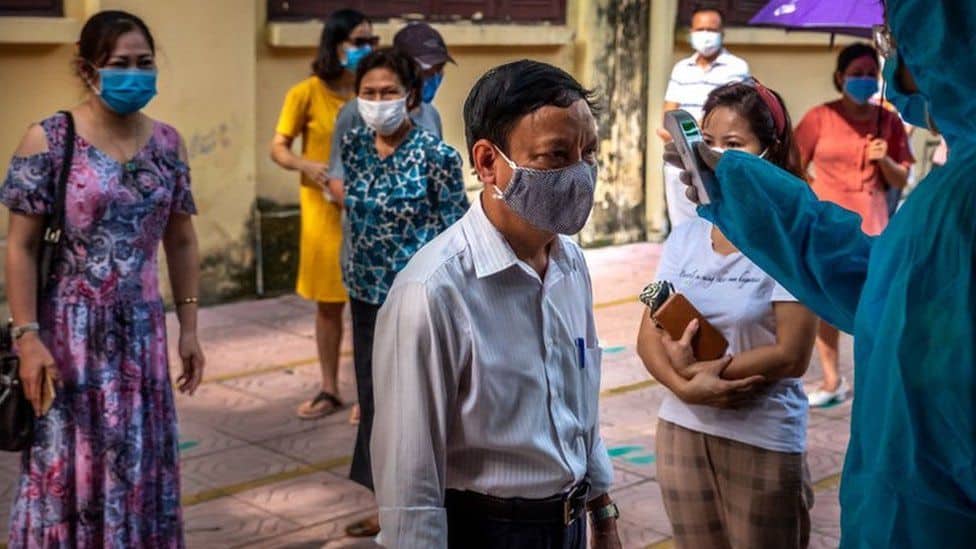 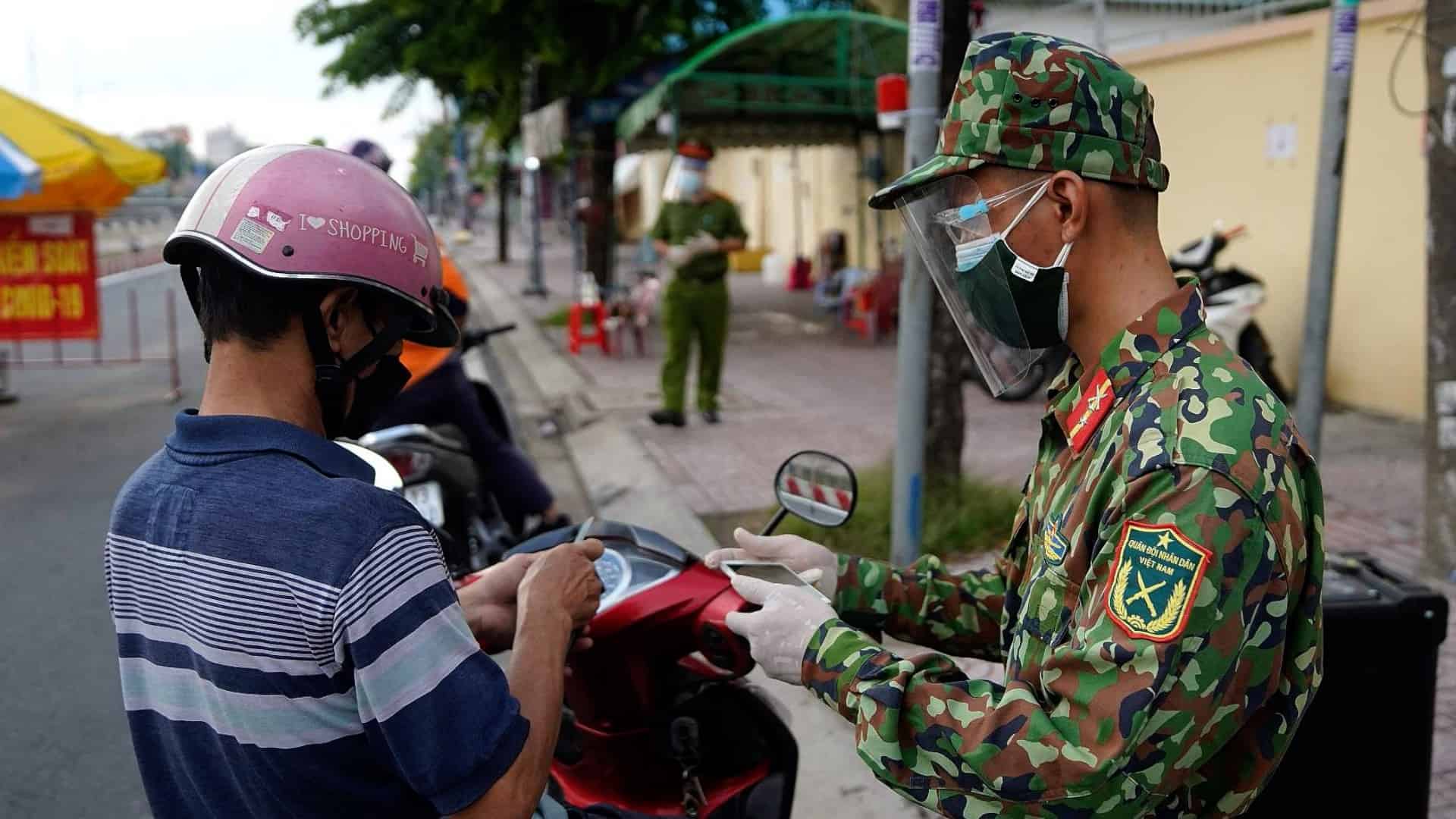 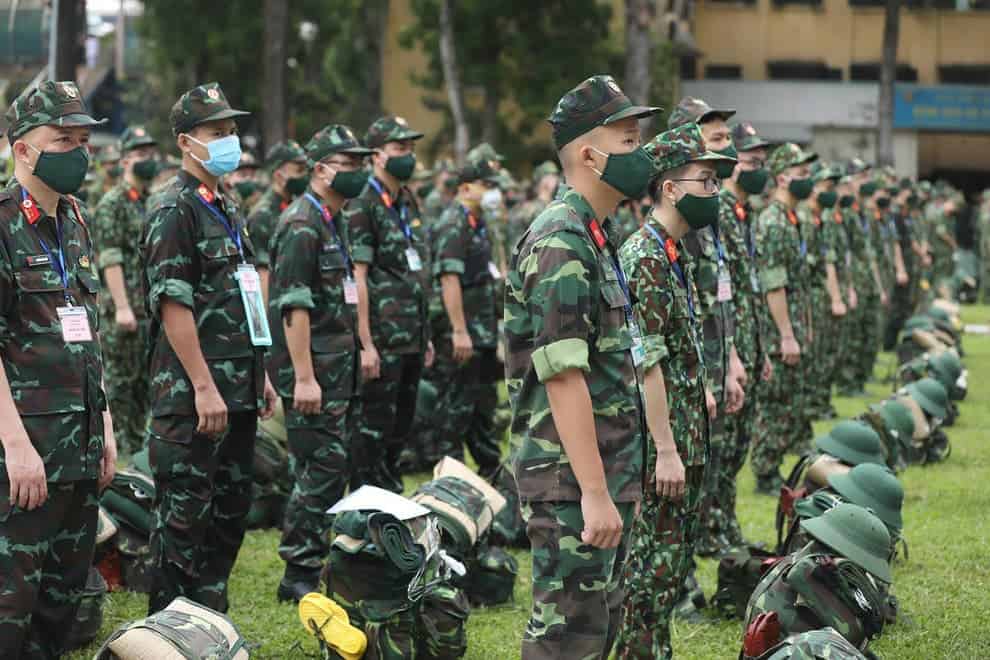 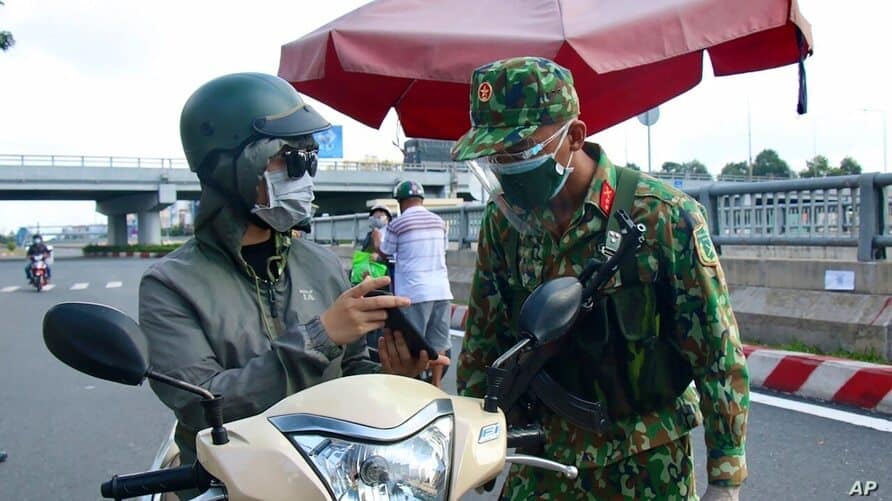 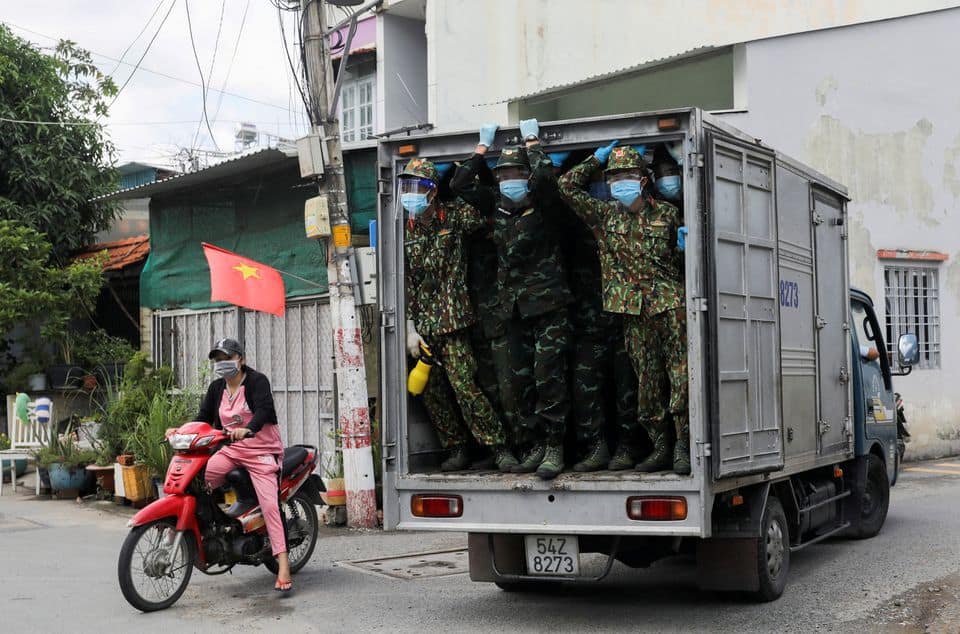