VIDEO: Putin Flexes on Merkel, Macron. Brings Home the Point They Can’t Have a Libya Conference Without Him

So much about 'isolated Russia'

Leaders gathering for Libya peace talks in Berlin attempted to take a group photo as the summit got underway, but the photo-op was momentarily delayed as no one could seem to find Russian President Vladimir Putin.

The awkward ‘Where’s Putin?’ moment was captured on video as other leaders shuffled around trying to locate the Russian president.

German Chancellor Angela Merkel looked particularly perturbed by Putin’s absence, turning around to look for him multiple times and pointing toward the empty spot where he should have been standing.

French President Emmanuel Macron then joined the search, looking off to the sidelines before beckoning toward the Russian leader who had finally emerged on the scene. Putin wasn’t the only one to show up late, however, as Italian PM Giuseppe Conte walked in with him.

The Berlin talks are aimed at securing a lasting ceasefire in Libya’s civil war, which has been raging between the UN-backed Government of National Accord (GNA) headed by PM Fayez al-Sarraj, and a rival government led by General Khalifa Haftar and his Libyan National Army.

The Sunday summit is a continuation of talks that began last week in Moscow hosted by the Russian and Turkish governments, which managed to bring the warring sides to the table. 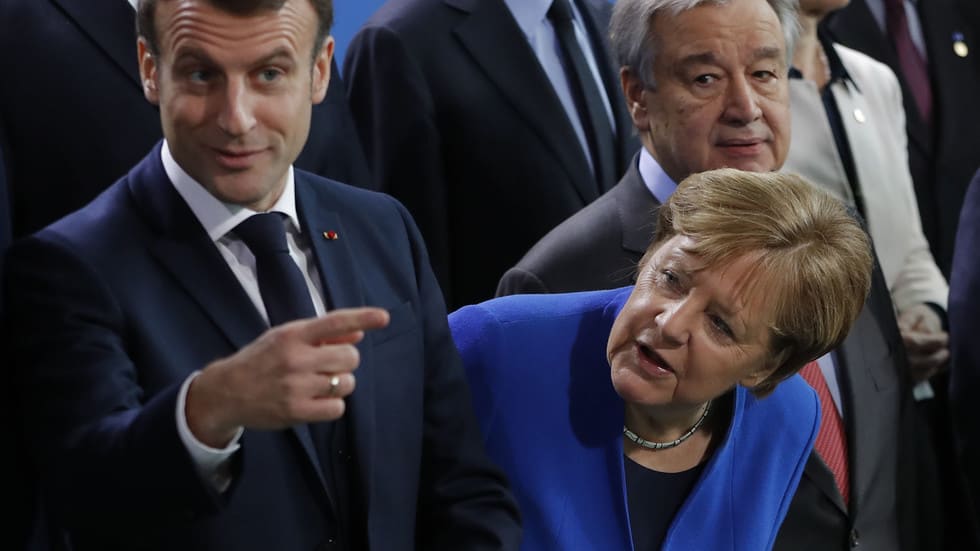 It was also Moscow which insisted leaders of warring Libyan faction be invited. The EU leaders had the bizarre idea of hosting a conference on Libya’s future without Libyans:

The Libya peace conference could have ended differently, had Russia not pushed for inviting the leaders of the two major Libyan warring factions to the meeting, the FM said.

He also added that Moscow had advocated the idea of expanding the circle of the conference participants to include Libya’s regional neighbors, which was eventually accepted by other nations.

Fayez al-Sarraj, the head of the UN-backed Tripoli-based government, and General Khalifa Haftar, the commander of the Libyan National Army, which controls most part of the country, took part in the summit alongside the leaders of Russia, Germany, France and the UK as well as the US Secretary of State.