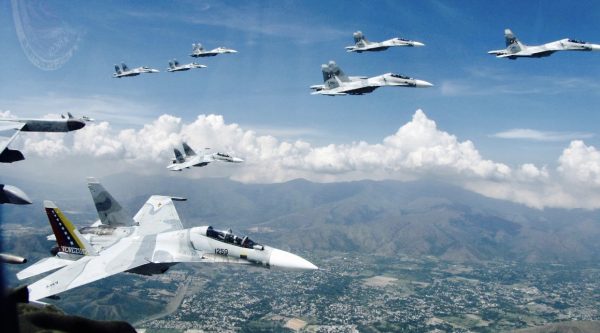 Amid growing tensions with the United States, which has threatened direct military intervention against Caracas, Venezuela’s armed forces have continued to prepare for any potential outbreak of open conflict with Washington. The small South American state has invested heavily in its armed forces, and today fields what is by far the most modern military on the continent. With state of the art Russian Su-30MKII air superiority fighters and S-300V and BUK air defence batteries, any potential military action on the part of the United States could prove costly. Venezuela’s airspace is far better defended today than that of any other state the U.S. previously launched military action against.

While heavily armed, the Venezuelan Air Force’s combat experience leaves much to be desired. The military has as a result recently sought the assistance of Russia’s own Air Force, specifically pilots with experience operating in Syria, to share their experience with their Venezuelan counterparts. With Russian Su-30, Su-33, Su-34 and Su-35 heavy fighters making up the bulk of the country’s aerial contingent deployed to Syria, all of which are highly similar to Venezuela’s own Su-30MKII fighters and based on the very same original Su-27 Flanker airframe, the experience of Russian pilots could indeed prove particularly useful for Caracas’s defence. Russian aerial assets were notably deployed to Syria in coordination with S-300V and other air defence systems, platforms all deployed by Venezuela’s armed forces to protect its own airspace, and so significant similarities between operations Russian forces trained for in Syria and those the Venezuelan military may be required to undertake in future do exist.

Venezuelan Defense Minister Vladimir Padrino Lopez, after talks with his Russian counterpart Sergei Shoigu, told reporters regarding his country’s request for Russian assistance and closer cooperation: “We have discussed matters of our cooperation. We want to go beyond regular military and defence cooperation, to strengthen it and to develop cooperation at the operative level.” The minister said he had suggested “sending Venezuelan Su-30 pilots to share their experience in Russia and to invite Russian pilots, who received precious combat experience in Syria, to come and share it with their Venezuelan colleagues.” Minister Lopez added that he had accepted Moscow’s invitation to attend the annual International Security Conference in Moscow. Military cooperation between the two states, both of which rely on the same military hardware and face the same primary adversaries, is set to continue to strengthen in future. Venezuela’s Air Force currently fields just 23 Su-30MKII fighters, though further orders were expected alongside possible orders of more advanced Su-35 fighters before the country’s economic crisis. With the Venezuelan economy heavily rentier oriented, a rise in oil prices could well facilitate further purchases of Russian fighters in future.