US Treasury Is Helping to Pay Ukrainian Soldiers’ Salaries

$1.8 billion for Ukrainian salaries in a couple of months. More on the way. 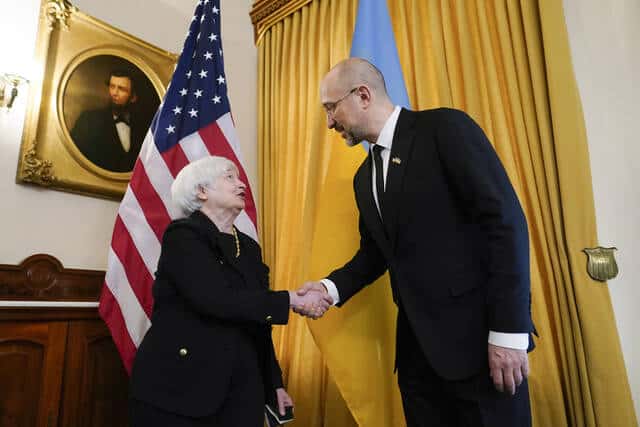 The United States is providing an additional $500 million in financial assistance to Ukraine to help the beleaguered country sustain salaries, pensions and other government programs while it fends off Russia’s invasion.

US Treasury says this is “just the beginning”:

“We plan to deploy this direct aid to Ukraine as soon as possible, to be used on the most urgent needs,” Treasury Secretary Janet Yellen said Thursday. “We know this is only the beginning of what Ukraine will need to rebuild.”

Indeed in February, the US Congress authorized $1.8 billion of this kind of “financial assistance. (Along with $3.5 billion for weapons, $4 billion for “humanitarian aid” and $3 billion for Pentagon redeployment to Eastern Europe, part of a $13.6 billion bill.)

Biden has already said he will need the Congress to pass another such authorization soon:

“Next week, I’m going to have to be sending to Congress a supplemental budget request to keep weapons and ammunition deployed without interruption,” Biden said. Congress has signaled it is receptive to further requests and has been expecting there would be a need for further help for the Ukrainians.

Biden did not detail how much additional funding he would request.

With $1.8 billion of “financial assistance” disbursed to Kiev in a matter of months the total for a year could come to about $5 billion. That’s enough to pay 400,000 soldiers a thousand dollars every month for a year. (A Ukrainian soldier would be paid half of that in peacetime.)

Kiev can say that US money is paying civilian government employees and pensioners, but obviously if those are paid with US money, it makes it easier for Kiev to pay soldiers with what’s left. (Whether tax revenue or foreign aid it’s all just on pile of money.)