"All the Chinese get in exchange for their efforts and resources are dollars, which the US creates for free." 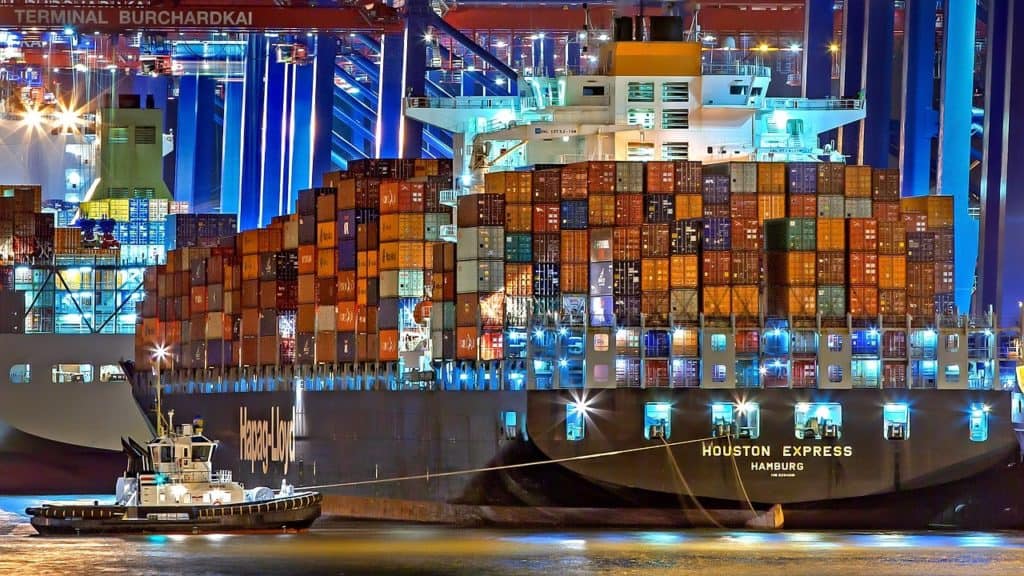 What do you get when you hand Americans big fat stimulus checks after decades of offshoring the country’s manufacturing economy?

The proof is in the numbers.

The overall trade deficit expanded by 87% in February to $71.1 billion, according to the latest Census Bureau data.

The trade deficit in goods hit another all-time record of $88 billion in February. Imports of goods jumped 10.3% year-on-year $219 billion. Exports of goods sagged 5.2% to $131 billion.

In the past, we were told the persistent drop in exported US goods was not a big problem because we can make up for it by exporting services. It hasn’t worked out that way. While the US still runs a trade surplus in services, the number is shrinking. The surplus of services in February plunged 24.4% to $16.9 billion. That was the lowest level since 2012. In fact, we’ve seen a steady deterioration of the services surplus since 2018. 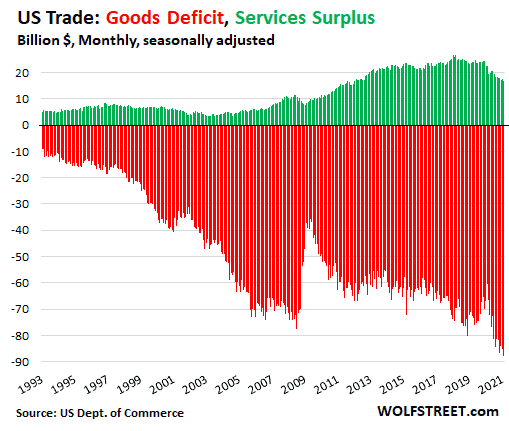 As WolfStreet explains, the US has increasingly offshored its entire economy.

During the Financial Crisis, the goods trade deficit shrank substantially, as consumers cut back buying imported stuff, while the trade surplus of services dipped only briefly and the overall trade deficit shrank substantially. But instead of reversing the course of the prior two decades of ballooning trade deficits, Corporate America went into hyperdrive during the Financial Crisis to offshore not only production, but also the design work that went along with it.”

Today, virtually all of the durable goods sold in the US are imported – from smartphones, to appliances, to clothing. And many of the products assembled in the US are made from imported parts. WolfStreet says we’ve established a pattern.

After decades of rampant offshoring of production, US consumers get free stimulus money in the hopes that they will turn this taxpayer money – or rather future taxpayers’ money since this is borrowed money and will have to be dealt with by future taxpayers for all times to come – into a big-fat stimulus for the manufacturing economies in other countries.”

This mirrors what Peter Schiff has been saying.

The government, or the Federal Reserve, is printing money and just giving it to unemployed people who aren’t making stuff, but they’re spending money. And so what they’re doing is they’re buying the stuff that people in other countries are employed making. So, it’s the productivity of the rest of the world that Americans are living off of, and the trade deficit evidences that and shows you that our whole economy, our whole recovery, is a fraud.”

Peter said this shows you just how much the US economy has declined.

At this point, we’re just living off the charity of the rest of the world and there’s a limit to the amount of charity, and I think we’re going to be testing those limits soon.”

What we’re seeing is entirely predictable. When you had a bunch of people who aren’t producing anything but big fat checks, they’re going to spend the money on goods that come from places where people are working. In effect, the US government is supporting the manufacturing economies of China and other countries. As Peter put it, China gives the US valuable consumer goods that our economy lacks the capacity to produce. All the Chinese get in exchange for their efforts and resources are dollars, which the US creates for free.

This is clearly not sustainable. What happens when the Chinese decide they have enough dollars? And that day may not be far down the road.

2 Comments
Leave A Reply
Cancel Reply
Read the rules before you think about commenting
Telegram Group
AE has a supporting readers Telegram group where we hang out and exchange leads and takes. If you have ever donated to AE drop me a line on email and I'll send you the link to join.