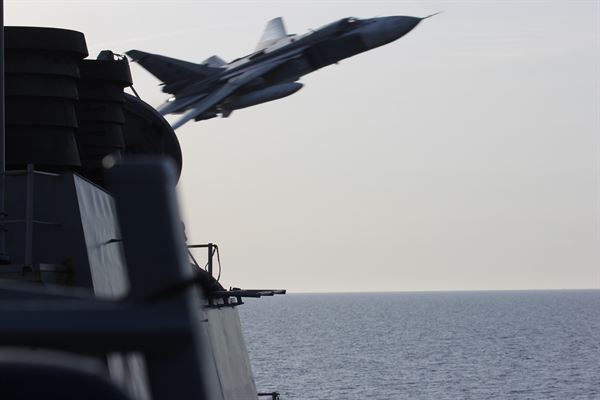 ABOARD THE USS BATAAN: Just days after the Navy’s new 2nd Fleet stands up later this month, its commander will push the USS Mount Whitney command ship, along with dozens of other NATO vessels, into the Baltic Sea to direct a major exercise.

In many ways, BALTOPS is the perfect way for 2nd Fleet to enter the world. It was reconstituted — the previous iteration was retired in 2011 — primarily to track and meet Russian maneuvers in the North Atlantic and the Arctic.

It’s no fluke that Adm. Andrew Lewis and his new team at 2nd Fleet are leading the annual BALTOPS exercise in Russia’s backyard — just off the coast of Kaliningrad, the Russian exclave bristling with radars, electronic warfare capabilities and guided missiles.

Plenty has changed since the original 2nd Fleet was stood down, including the Russian invasion of Ukraine and annexation of Crimea, leading the Navy to reestablish the command. Lewis envisions it as a lean maneuver arm able to operate from Greenland to the Mediterranean — wherever a surge of forces is needed.

The 2nd Fleet will bolster the 6th Fleet around Europe and has trained to quickly deploy a small command group quickly to command and control US and NATO ships on a variety of missions from humanitarian aid, anti-submarine operations or presence operations around Europe.

It’s something the Navy has done comparatively little of since the end of the Cold War, particularly over the past two decades when it has operated as a support force for ground wars in the Middle East and Afghanistan. In some ways the 2nd Fleet is being asked to model a new way of operating, in which the Navy provides the forces that are at the point of the spear, confronting Russian and Chinese ships, aircraft, and submarines.

Lewis, aboard the command ship USS Mt. Whitney, will lead the annual BALTOPS exercise in the Baltic Sea, next month, putting the 2nd Fleet in Moscow’s backyard from the moment it stands up. The exercise, which will test new command and control capabilities among NATO allies working at sea and on land, will be a critical test for the Navy’s vision for 2nd Fleet as an agile, small maneuver element that can pack an outsized punch.

Putting dozens of ships in the tight Baltic waterway, so close to the Russian coastline and its exclave of Kaliningrad which Moscow has stacked with radar systems and missiles, will present a challenge for NATO. Last year, Russian forces attempted to jam the communications of NATO ships and aircraft during the Trident Juncture exercise in Norway.

“We kinda know what we think they’re going to do,” Lewis said. “This is about deterrence, this is about being professionals, but we’re also going to be there. I would characterize [the intent of BALTOPS] it with three ideas: professionalism, presence with a purpose, and partnerships with NATO and our allies.”