If this is such a great threa to China's Navy, what to say of China's own missiles with three times the range? 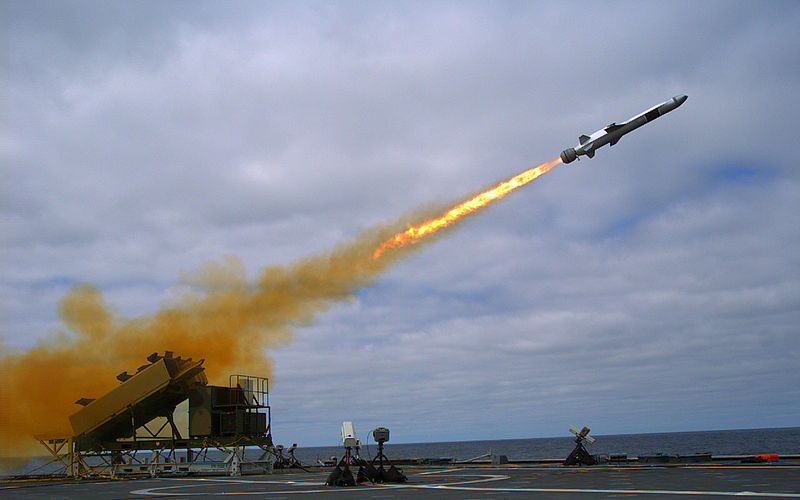 Editor’s note: This indeed sounds like an interesting and nifty weapon, but it also shows that even with Norwegian help the US is still behind. It outranges the standard US Harpoon anti-ship missile by 30 nautical miles, but is still outranged by China’s missiles by 200 nm (!) — or compared to shorter-range Chinese variants carries only half the payload. Fully accepting that range and payload aren’t everything, if this is such a threat to China’s Navy, then what to say of China’s missile threat to US ships? And no, this weapon doesn’t magically transform the disastrous LCS into a good surface combatant.

It can travel more than 100 nautical miles, passively detect an enemy through imaging stored in its computer brain and can kill a target so precisely that an operator can tell it to aim for a specific point on a ship — the engine room or the bridge, for example. And it’s heading to China’s stomping grounds.

Giffords is the second LCS to deploy this year. The LCS Montgomery also deployed from San Diego in June after a 19-month lapse in LCS deployments as the Navy reworked the way it mans and trains crews for the ships.

A Navy official speaking on condition of anonymity said the ship was deploying to the Indo-Pacific theater. The official did not elaborate on the ship’s schedule. Giffords’ sister ship, the Montgomery, is currently operating in the Gulf of Thailand, according to a Navy website.

When equipped with the Raytheon/Kongsberg-made Naval Strike Missile, or NSM, and Northrop Grumman’s Fire Scout for surveillance over the horizon, an LCS sitting off the coast of Virginia Beach, Virginia, could destroy a ship sitting off Cape Hatteras, North Carolina. That’s more than 30 miles further than the published range of the current anti-ship missile, the Harpoon, which is in excess of 67 miles.

The Navy has signaled it will also install NSM on its next small surface combatant, FFG(X).

The deployment is the latest sign that the U.S. Navy is gradually upping its game in the Pacific, which during the past decade has seen rising tension over expansive Chinese maritime claims decried by the international community but enforced by China’s Navy, Coast Guard and maritime militias.

The U.S. Navy has made a dedicated push to improve the ranges of its systems, from its missiles and sensors, to its air wing with the development of the MQ-25 Stingray unmanned aerial refueling drone and new conformal fuel tanks for the F/A-18 Super Hornets that increase the speed and range of the service’s mainstay aircraft.

But it’s also a sign that despite a steady drumbeat inside the Pentagon to “move faster” to get new capabilities to the fleet, the Navy’s process is still moving painfully slow. The NSM partially answers the bell for a joint urgent operational need issued by former U.S. Pacific Command head Adm. Robert Willard from early in President Barack Obama’s first term, who identified the need for longer-range anti-ship missiles in the Pacific.

“It’s great that the Navy is doing these improvements, but it’s very incremental,” said Bryan Clark, a retired submarine officer and analyst with the Center for Strategic and Budgetary Assessments. “It has been a decade since the Navy said: ‘Hey, we need to start an unmanned aircraft program of some kind, and we need put better anti-ship missiles on our ships.’”

“And here we are, 10 years later, and the MQ-25 is still making its way toward fielding, which won’t happen for several years, and we’re finally deploying a ship with a better anti-ship cruise missile,” Clark added. “So kudos to the Navy for doing it, but this is emblematic of the problem the [Department of Defense] has in making the shift toward new ways of fighting. It just can’t get out of its own way to field a new capability in under a decade.”