Editor’s note: My initial hunch was that the incident was probably caused by unnecessary bravado and showmanship on both sides, but Bernhard digs up the Handbook of Nautical Rules and obliterates that.

BREAKING: #USNavy has released video of #USSChancellorsville being forced to maneuver to avoid collision, after #Russian destroyer Udaloy I made an unsafe and unprofessional approach in the Phillippine Sea, June 7th. (1/2) pic.twitter.com/HpmAMtYraS

BREAKING: #USNavy has released video of #USSChancellorsville being forced to maneuver to avoid collision, after #Russian destroyer Udaloy I made an unsafe and unprofessional approach in the Phillippine Sea, June 7th. (2/2) pic.twitter.com/bM9ZHuYSUM

The accident prone U.S. 7th fleet is again in trouble.  CNN sensationally reports of a near collision of a U.S. navy ship with a Russian navy one:

The United States and Russian navies are at odds over an apparent near collision in the Pacific Friday with each side blaming the other. The US and Russian warships came somewhere between 50 feet and 165 feet of each other, according to the two opposing reports, with both sides alleging their ships were forced to perform emergency maneuvers to avoid a collision.
…
“A Russian destroyer …. made an unsafe maneuver against USS Chancellorsville, closing to 50-100 feet, putting the safety of her crew and ship at risk,” US Navy spokesman Cmdr. Clayton Doss told CNN in a statement.”This unsafe action forced Chancellorsville to execute all engines back full and to maneuver to avoid collision,” Doss said.

The US guided-missile cruiser was traveling in a straight line and trying to recover its helicopter when the incident occurred, he said. “We consider Russia’s actions during this interaction as unsafe and unprofessional,” Doss said.

There are international nautical rules that apply to any ship at sea. Those rules give no special right to any ship that is traveling in a straight line or tries to recover a helicopter.

The Russian navy says that its ship had the right of way and that the U.S. ship hindered its passage:

Russia has voiced a protest to the US command after its guided-missile cruiser hindered the passage of the Admiral Vinogradov anti-submarine destroyer some 50 meters in front of it, forcing the vessel to perform a dangerous maneuver, the Pacific Fleet’s press service told reporters on Friday.The incident occurred at 6.35 a.m. Moscow Time in the southeastern part of the East China Sea, when a task force of the Russian Pacific Fleet and a US carrier strike group were heading in parallel directions. “The US cruiser Chancellorsville suddenly changed its course and crossed the Admiral Vinogradov destroyer’s course some 50 meters away from the ship. In order to prevent a collision, the Admiral Vinogradov’s crew was forced to conduct an emergency maneuver,” the press service said.

The U.S. Navy provided CNN with a picture of the incident taken from a helicopter. It clearly shows that U.S. ship was in the wrong and that the Russian view of the incident is the correct one.

The picture shows both ships with their bows towards the camera. The ship seen on the left is the Russian destroyer Admiral Vinogradov. The ship seen on the right side of the picture is the U.S. cruiser Chancellorsville. The stern waves show that the Russian ship was on a straight course and made a last-minute maneuver by taking a sharp turn to its right to avoid an imminent collision.

To judge the situation one must take the view of both bridge crews at the time before the emergency maneuver happened. The crew of the U.S. cruiser saw the Russian ship coming up on its right or starboard side. The crew of the Russian ship saw the U.S. ship coming up on its left or port side. The rules for such a crossing of courses at sea are clear.

The Handbook of Nautical Rules lists as the International Maritime Organization Rule 15:

When two power-driven vessels are crossing so as to involve risk of collision, the vessel which has the other on her own starboard side shall keep out of the way and shall, if the circumstances admit, avoid crossing ahead of the other vessel.

Every vessel which is directed to keep out of the way of another vessel shall, so far as possible, take early and substantial action to keep well clear.

Where one of two vessels is to keep out of the way the other shall keep her course and speed.

It is evident from the picture that the U.S. navy cruiser had the Russian destroyer on its starboard side and that both ships were on a collision course. It was therefore the U.S. ship that had the duty to ‘take early and substantial action’ to keep out of the way and that it had to avoid crossing ahead of the Russian vessel. The Russian ship correctly kept its speed and course until the situation required a last-minute maneuver to avoid an imminent collision.

In the breathless video report of the incident the CNN Pentagon reporter explicitly says that Russian ship was on starboard of the U.S. ship, but repeats the nonsense claim by the U.S. navy spokesperson that the U.S. ship was in the right and that the Russian ship made an “unsafe maneuver”.

The crew of the Chancellorsville should call itself lucky. Russian ships are build with a strong bow to travel in icy waters. Had the Admiral Vinogradov not made the emergency turn to its right, its bow would have cut their ship in half.

The home port of the Chancellorsville is Yokosuka, Japan. It belongs the U.S. 7th fleet which has a record of bad seamanship. Two years ago the Washington Post reported:

The collision of the USS John S. McCain and an oil tanker on Aug 21 — which left 10 sailors dead — was the culmination of more than a decade of nonstop naval operations that has exhausted the service.
…
In January, the guided missile cruiser USS Antietam ran aground in Tokyo Bay, leading to the commander’s dismissal. In May, the cruiser USS Lake Champlain collided with a South Korean fishing boat. And roughly a month later, the USS Fitzgerald collided with a container ship in the approach to Tokyo Bay. Seven sailors died and the destroyer’s commanding and executive officers were relieved.
…
The Antietam, McCain and Fitzgerald are all in the 7th Fleet based in Yokosuka, Japan, raising questions over whether there are particular problems in that command. The 7th Fleet is responsible for 48 million square miles in the Pacific and Indian oceans, the Navy said. Swift also dismissed its commander, Vice Adm. Joseph Aucoin.

All the above incidents were caused by the crews of the U.S. navy ships. When one reads reports of those incidents one finds that the 7th fleet ships are undermanned and badly maintained. Its crews are insufficiently trained. They obviously do not know the basic international rules at sea or how to handle their ships.

It should be CNN’s task to point that out instead of blabbering about ‘Russian harassment of U.S. ships’.

This is a Moon of Alabama fundraising week. Please consider to support our work.

Release the radar bearings and courses of both vessels.

All you landlubbers should avail yourselves of the maritime rules governing avoidance of collisions at sea before jumping to conclusions about which vessel was in the right and which one was in the wrong. The video seen by the public represents the U.S. perspective; we have yet to see the image capture made by the Russian crew. Despite the opinion of the usually credible Moon of Alabama website, it does not reflect the complete understanding of the rules,

The U.S. vessel is required to display signals from its mast (vertical lights displayed in the scheme of red light over white light over red light and round ball shape over diamond shape over round ball shape) to indicate it was restricted in its ability to maneuver such as the case when it is recovering aircraft as defined by rules 3,18 and 27 of COLREGS.

If the U.S. ship complied with the requirement to alert vessels in its immediate location, the Russian vessel was obligated to maneuver to avoid the U.S. ship. However if the Russian video shows the U.S. did not display any indication from its mast that it was burdened, the U.S. vessel was at fault as defined by rules 15, 16, 17 of COLREGS. This is why we must see the video evidence from the Russian side before making a judgment. That is all mates! 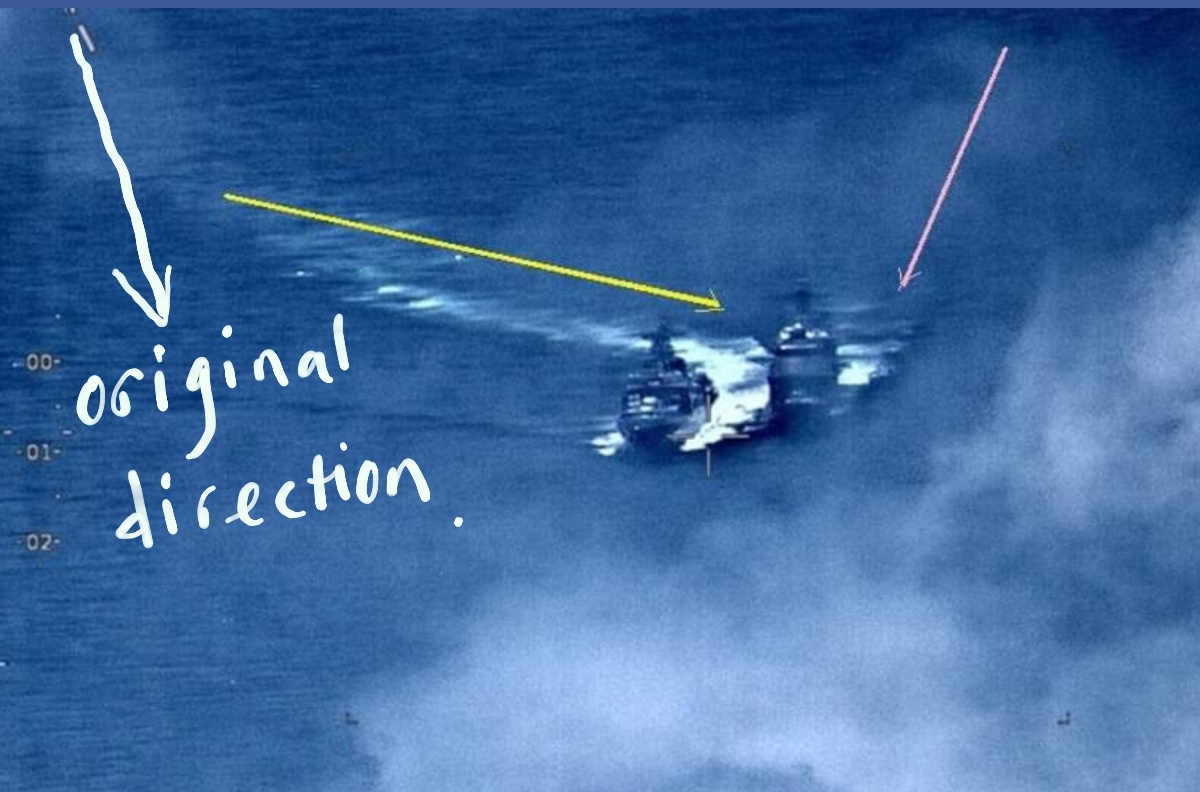 The trails showed a sudden change in direction of the Russian ship. 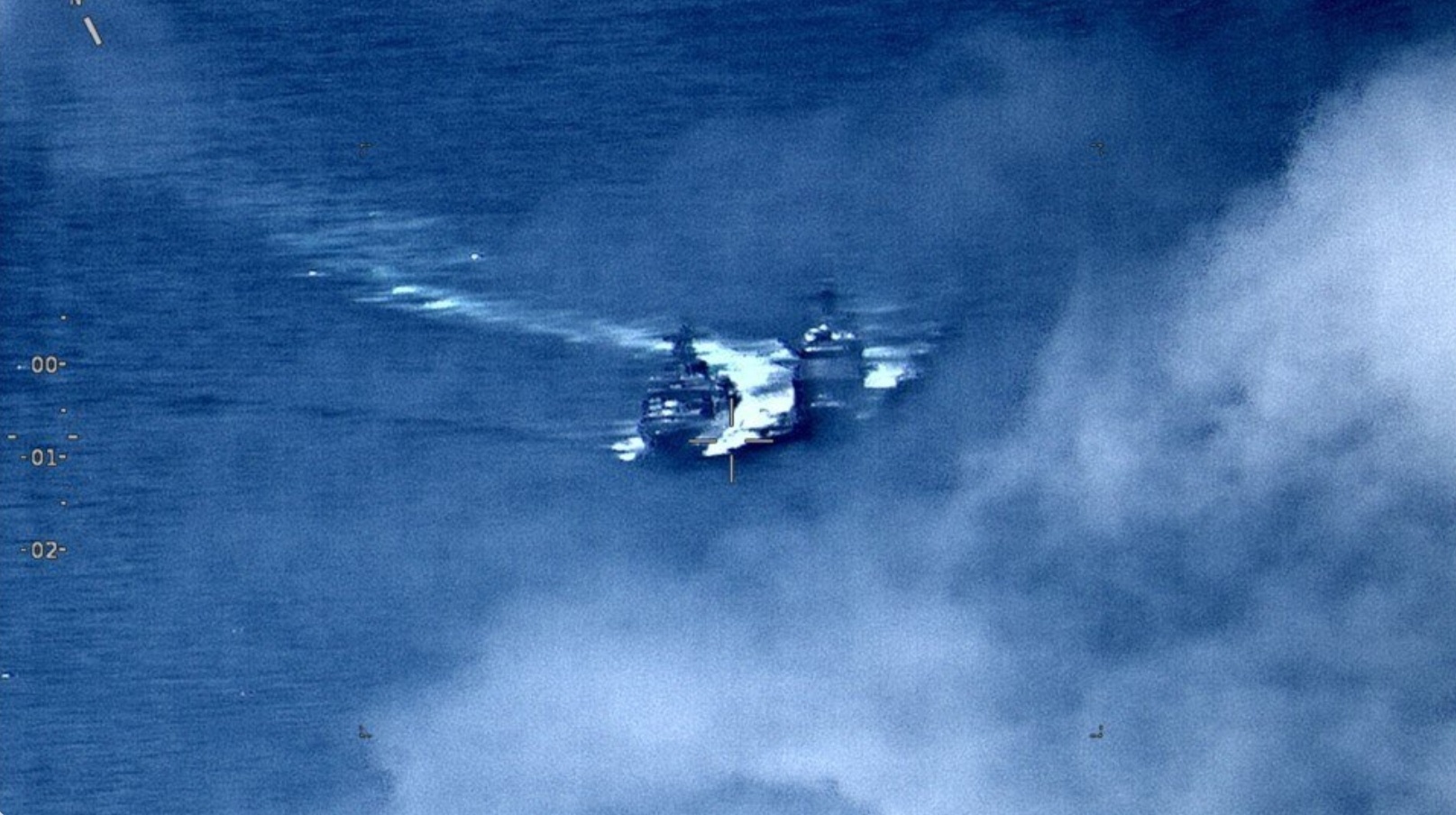 This is the original photo.

My 1st thought, which I voiced to my daughter, when hearing the incident explained over the radio via the official government release was “when and if video surfaces, the real truth will point to the American navy as screwing up”……..That’s sad we know our government has done so many aggressive acts against innocent people we know when they are lying to us…….Which is “ALL THE TIME”

The picture provided by US Navy shown in this article is not the original photo. It was cropped to hide the truth, which is that the Russian ship had made a sudden change in direction.

Oh yes, “Russian aggression”, yes yes.
The sea is no place for cow boys.
The Russians show extremely high level of seamanship.
I have sailed and steered huge ships for eleven years.
I steered ships in hurricanes, manoeuvring towards the 60 ft waves, i have steered ships scratching the sea bottom to get them into the port, i have steered ships into narrow channels, but this is pure perfection.
With the ice breaking bow, the US navy ship would be at the bottom in ten minutes cut in half.
And if such had happened, there will be nothing to blame on the Russians. Instead, the US navy had to pay for the damage caused on the Russian.

Thanks for this. There has been utter confusion in the press. Well, not “utter confusion,” America’s press pretty well immediately adopted the point of view that the Russian ship, of course, was wrong.

Since we see American aggressiveness almost everywhere today and since in the not-too-distant past we had a couple of incidents involving incompetence with US Navy ships, it seems the author has put together a pretty definitive explanation of what actually happened.

It really is becoming scary the way America now vents its anger and frustration in almost every field of endeavor, from international trade and international military treaties to using so many sanctions it is trying to make American law into international law.

It of course isn’t just big-mouth Trump behind the attitudes towards the rest of the world. Most of it could not happen without a compliant Congress. Allies have all been intimidated from speaking out.