‘Great’ headline in the Navy Times:

This strike group made China nervous — even without an aircraft carrier

The Navy Times is a privately owned paper meaning it can be a lot more candid than the admirals. Instead of getting the PR nonsense about “reassuring our allies”, you get what navy men actually think.

And what they think is that it’s a hoot to sail half a world across to make China nervous — in the South China Sea. 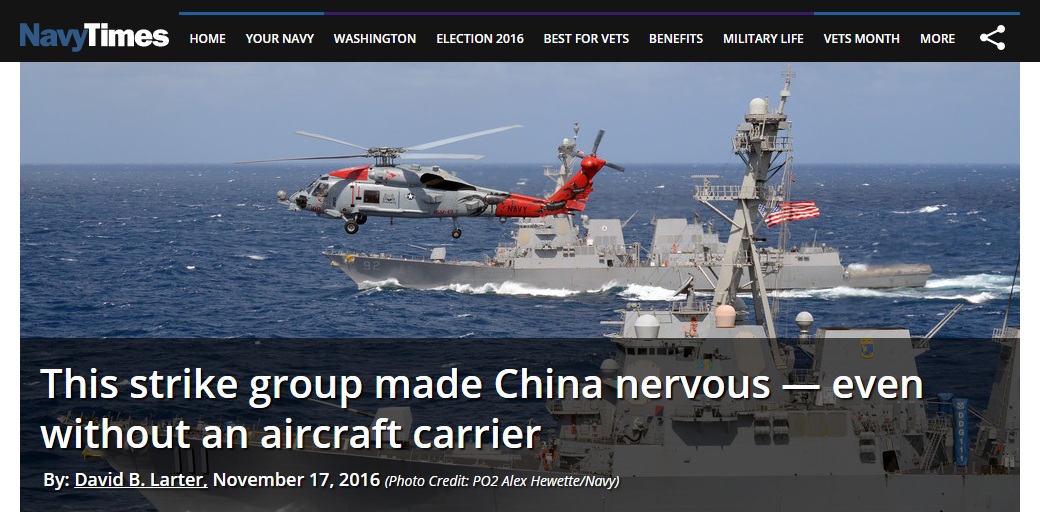 For perspective imagine a Chinese paper celebrating the ‘success’ of a hypothetical deployment of PLA’s Navy to the Gulf of Mexico in making the US nervous.

The Navy Times reports the US is not there because any of the neighboring nations asked it to be, instead it is the US taking it upon herself to be the referee between them:

During their patrols in the region, all three ships made close passes of Chinese-claimed islands. Most recently the Decatur conducted a freedom of navigation operation in the Paracel Islands, which are claimed by Taiwan, Vietnam and China. The U.S. conducts the so-called FONOPS to challenge what they view as excessive claims by all parties and not just China.

If anything that just makes it worse. If they’re not enforcing anyone’s claim; neither their own, nor of another state then they shouldn’t be there — or revel in making China “nervous”.