US Is Now Accusing Russia of Helping the Taleban Against It

Let’s also say — purely hypothetically speaking of course — that Russia opposed all of these moves and was scandalized by them.

What do you do — hypothetically speaking — after all of this when you’re trying to disengage from your own occupation of Afghanistan and as you’re retreating you’re realizing the whole hose is coming down with your Sunni fundamentalist opposition poised to take over huge areas of the country if you follow through?

Well of course you blame Russia!

Speaking to the press the commander of the Afghan occupation General John Nicholson worried about the “malign influence” of Russia:

Second concern would be the — the malign influence of external actors and particularly Pakistan, Russia, and Iran. And we’re concerned about the external enablement of the insurgent or terrorist groups inside Afghanistan, in particular where they enjoy sanctuary or support from outside governments.

He went on to explain further:

Q:  In your opening statement, you have mentioned Russia and Iran. Would you please elaborate more about what type — what’s the nature of the Russian and the Iranian influence in Afghanistan? Have you seen any evidence that they are linked to any terrorist group in the country?

GEN. NICHOLSON: Thanks for asking that, Joe.

So, Russia has overtly lent legitimacy to the Taliban. And their narrative goes something like this: that the Taliban are the ones fighting Islamic State, not the Afghan government. And of course, as I just outlined for you, the Afghan government and the U.S. counterterrorism effort are the ones achieving the greatest effect against Islamic State.

So, this public legitimacy that Russia lends to the Taliban is not based on fact, but it is used as a way to essentially undermine the Afghan government and the NATO effort and bolster the belligerents.

So, it’s not helpful. And it’s something that the Afghan government has addressed with Russia.

So, when these external actors, be it Russia or Iran, publicly legitimize a movement that’s not supported by the people, they’re not advancing the cause of stability in the region.

So, this — this to us is what we all want.  We want a stable, prosperous, secure Afghanistan.  We think this will be positive for the region and so we would hope that actors, like the ones I mentioned, would support that instead of legitimizing a belligerence.

Q:  What do you think Russia’s motive is for doing that?

GEN. NICHOLSON:  Well, certainly there’s a competition with NATO, but I don’t want to conjecture as to what Russia’s motives are. We just would like to see a change in their behavior in terms of not legitimizing the enemy.

So then the poor United States military is bogged down in Afghanistan, with no light at the end of the tunnel, because Russia is “publicly legitimizing” the Taleban.

Never mind that US green-lighted its allies Pakistan and Saudi Arabia installing and then recognizing the Taleban in Afghanistan in the 1990s in the first place, while Russia continued to back the so-called ‘Northern Alliance’ against them. Now it’s Russia’s fault that after 15 years of American occupation things are so bad there is now even Islamic State presence in Afghanistan. (Or as good Walker Bush would put it is giving “moral comfort to terrorists”.)

And just to be clear US has always presented its strategy for Afghanistan as one where enemy will be weakened and then talks will be held with the “moderate Taleban” to conclude a peace. There is no need for Russia to legitimize the Taleban because the Americans (and many Pashtun tribesmen) have already done so.

In fact just three months ago the US has concluded a peace deal that brings Gulbuddin Hekmatyar — an acid-throwing Islamist since the 1970s — into the Afghan government. Reviled in Kabul for shelling it mercilessly in 1994 he is a much bloodier figure than any of the Taleban leaders and the movement he heads is nowadays far less popular than the Taleban, whom after all control up to one third of Afghanistan, and that is only during the day, at night their reach expands further.

Oh and yeah, the General Nicholson also accused Iran, the defender of the Shia faith, of sheltering the Sunni fundamentalist Taleban who brutally repressed Afghanistan’s Shia Hazara ethnicity. — That’s right before he went on to add he might have a Brooklyn bridge to sell at a good price. 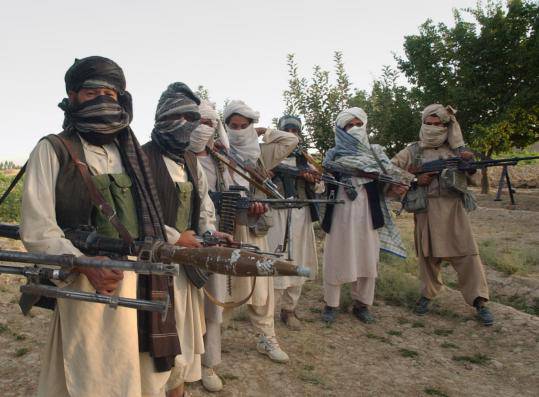 Of course, the Taleban are actually more conservative than wide swathes of the radical Islamist rebellion in Syria. So why is US fighting Afghanistan’s “moderate rebels” in the first place?