The US gross national debt outstanding has ballooned by over $5 trillion since early March 2020, to $28.4 trillion, where it has been stuck since August 1 when the debt-ceiling farce recommenced.

The burning question is who the heck bought these Treasury securities and who is holding them, given that everyone who is buying any of them now is getting crushed by historically steep negative “real” yields, with CPI inflation outrunning even the 30-year Treasury yield by 3.5 percentage points.

The Treasury Department released its Treasury International Capital data this afternoon. It tracks foreign holdings of Treasury securities by country through June. Now we can piece the holdings together. And it’s quite a show.

The Fed increased its holdings of Treasury securities by $241 billion in Q2 and by $2.6 trillion since March 2020, more than doubling its holdings in 16 months (blue line, left scale), which brought its holdings in Q2 to a record of 18.2% of the Incredibly Spiking US National Debt (red line, right scale): 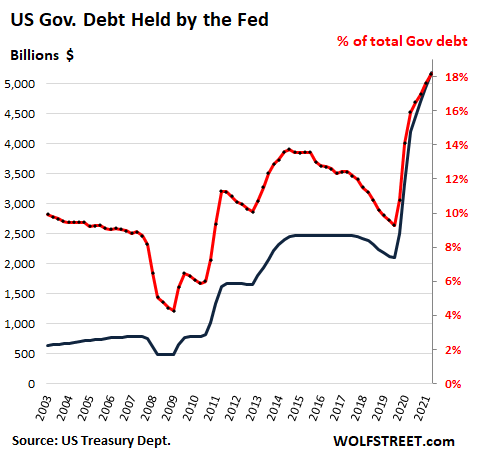 US Banks gorge on Treasuries.

US commercial banks increased their holdings of Treasury securities by $96 billion in Q2 and by $424 billion since March 2020, to a record $1.4 trillion, according to Federal Reserve data on bank balance sheets. They now hold 4.9% of the Incredibly Spiking US National Debt: 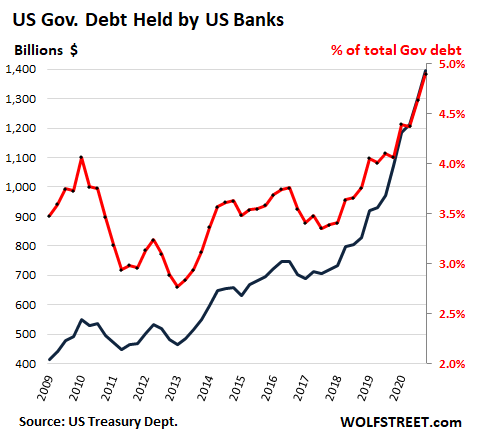 US Mutual Funds, Money Market Funds, & ETFs, from March 2020 through Q1 2021, increased their holdings of US Treasuries by $1.26 trillion, to a record of $3.9 trillion, according to the latest data available from SIFMA (Securities Industry and Financial Markets Association). This brought their share of the US National Debt to a record 13.9% at the end of Q1 (red line, right scale).

Note the massive jump in 2020, largely due to the increase in holdings by money-market funds. SIFMA has not yet released Q2 data, but it likely jumped in line with the situation we have been encountering starting in April with the Fed’s massive liquidity-mop-up operation via Overnight Reverse Repos (chart shows annual data; 2021 = Q1 level): 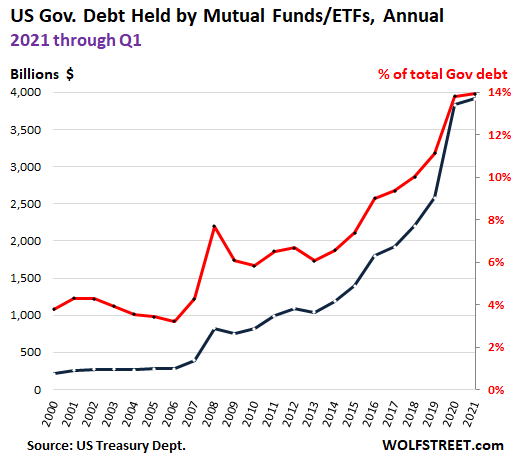 Individual investors are a fickle bunch. They have been unloading their direct holdings of US Treasuries in 2020 and 2021 through Q1, to $1.54 trillion, down by $400 billion from the peak in Q4 2019, according to SIFMA (blue line, left scale).

Note, amusingly, the plunge in holdings to essentially zero from 2000 through the peak real estate frenzy in 2007. After the real-estate collapse, American fell in love with Treasuries again, though the yields were piss-poor.  Their share in Q1 amounted to 5.5% of the monstrous US debt: 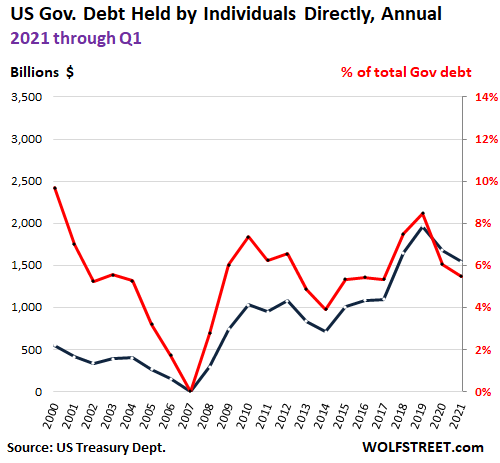