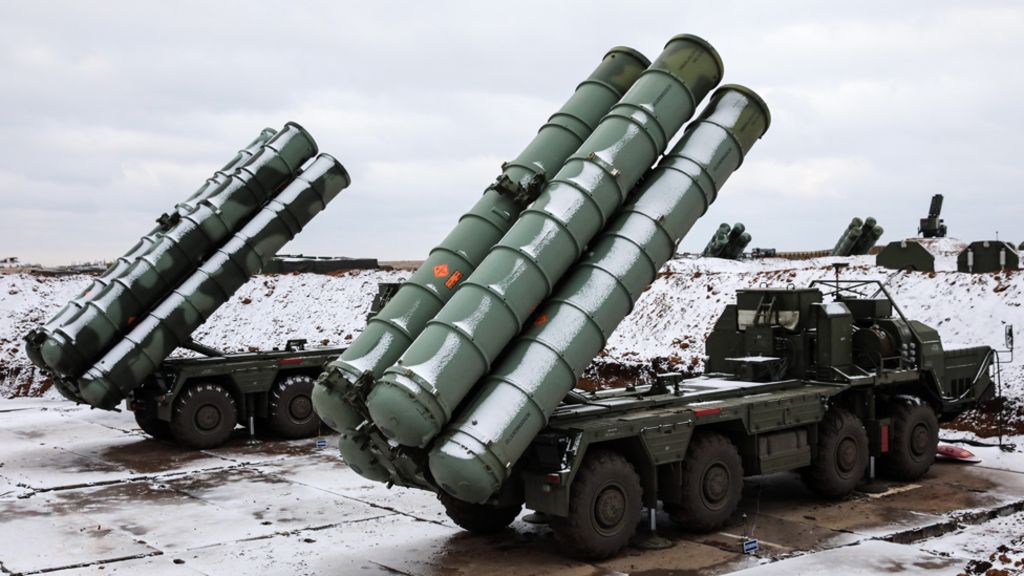 So, Erdogan did stand his ground:

Turkey has received the first shipment of S-400 air defense missile system equipment from Moscow, defying pressure from Washington to scrap the arms deal with Russia.The components arrived at the Murted military airfield outside Ankara on Friday, the nation’s Ministry of National Defense said in a short statement. Russia’s Defense Ministry has also confirmed that the shipment has started and will continue as scheduled.Both countries signed a contract for the delivery of four S-400 batteries in 2017. The contract earned Ankara the ongoing row with Washington, which strongly opposes the deal, claiming the purchase of advanced Russian-made weapons undermines the security of NATO and goes against American interests.

I want to clear the air from the very start: Turkey knows what F-35 is and that is why she will “survive” cancellation of F-35 deliveries. F-35 for Turkey, who produced a number of parts for this aircraft, was primarily of industrial interest.

So, all this contrived BS about security issues is just that, BS. Modern Air Defense complexes, such as S-400, even in their export version, can detect, track and shoot down all those VLO (Very Low Observability) targets such as F-35.

The only “security issue” here for the United States was the fact that having “live” F-35 and S-400 simultaneously by the key member of NATO would have revealed publicly (in professional circles it is known well already) all massive faults with F-35 in general and ONLY-VLO-centric combat aircraft concept in particular.

There is a lot, as was expected, of butt-hurt right now. Such as this:

Washington has threatened to remove Turkey from its F-35 fighter jet programme, giving Ankara until July 31 to cancel the S-400 purchase or have its pilots kicked off the training course and expelled from the US. But Turkish President Recep Tayyip Erdogan said after meeting US counterpart Donald Trump last month that he was confident Ankara would not face sanctions for buying the Russian missile system.

Erdogan told Trump during their meeting on the margins of the G-20 meeting in Japan that former president Barack Obama did not allow Ankara to buy Patriot missiles — an equivalent of the S-400s.

Trump sounded convinced and said: “You can’t do business that way. It’s not good.” The Turkish air force changed the name of the base in Ankara from Akinci to Murted after it was the centre of a 2016 failed coup attempt.

For starters: Patriot is NOT equivalent of the S-400 with S-400 being superior in its key performance characteristics. Secondly, I agree with Trump in a sense that “you can’t do business like that” and this has nothing to do with Turkey but with the United States which is now in full economic warfare and political bullying with most of the world.

The inevitable question thus–who in their mind would do business with the country which is ungovernable and both has no competitive systems to offer and may stop (or disable) their procurement any moment? Only spineless Europeans, maybe. India was explicit in basically telling the US to mind its own business re: India’s $5 billion contract with Russia for S-400. Pakistan, India, many others, including Gulfies want S-400 and other Russian weapon systems. We know what the United States will do–she will try to sabotage any Russia’s effort across the whole spectrum of international economic activity, be that Nord Stream-2 or arms trade.

For Turkey, however, it seems, S-400 is not just military or, inevitably, geopolitical reorientation issue, with Ankara beginning to understand where her real interests lie. In the end, Turkey sees on the horizon the access to technology transfer not only for S-400 (its export version, of course) but eventually for export versions of SU-35, SU-57 and, inevitably, S-500 and who knows what else.

So, there is a lot to be taken in at this moment but as I said many times, Russia has the ability and instruments for defense of larger Eurasia, plus, in Turkey’s case, deliveries and deployment of S-400 boost Turkey’s regional standing, including in disputes with Greece and Cyprus

. It is enough to look at the map of the region to understand why S-400 changes Turkey’s status in Eastern Mediterranean. As stated by Russian MoD (in Russian) the second gigantic An-124 will leave for Turkey with another set of S-400 equipment shortly, the balance, which is 120 missiles, will be delivered by the end of this Summer by sea-route.

Second group of Turkish officers will start its training for S-400 this July in Russia. This comes to mind, inevitably;-))

Mueller says: you see how I turned you? In 5 minutes and no tricks.

I guess next step will be US sanctions against Russia’s sovereign debt–this will accelerate Empire’s decline greatly. Zugzwang is a bitch.