South Korean President Moon Jae-in made his 4-day state visit to China on December 13th. Unlike U.S. President Donald Trump, Beijing didn’t give him a “state visit-plus” reception. However, Mr. Moon believes it was a successful trip, or at least he wanted the South Korea people to believe it was a meaningful visit. But it isn’t, and Beijing has decided to punish South Korea – again.

Today (20th December), China has once again banned tour groups to South Korea, less than a month after Beijing reportedly have eased the retaliatory restrictions ahead of President Moon’s visit to Beijing last week. Last month, China said it will allow travel agencies in Beijing and Shandong to partly resume sales of group tours to South Korea.

Although that November’s good news excluded any travel packages to Lotte Group, the South Korea conglomerate that provided land for the installation of a U.S.-made THAAD anti-missile system that Beijing furiously opposed, it was nevertheless a great relief to the tourism industry of South Korea. But Beijing has now decided to continue punishing the country instead.

“I was told from my boss this morning that our Chinese partners [based in Beijing and Shandong] said they won’t send group tourists to South Korea as of January,” – a Naeil Tour Agency employee said. The fact that the decision to reinstate the ban comes just days after President Moon Jae-in’s visit to China speaks volumes about the failure of his 4-day trip.

Still, it was a surprise development considering both leaders – Chinese President Xi Jinping and South Korean President Moon Jae-in – witnessed the signing of seven agreements covering cooperation in areas from food safety to the Winter Olympics. So what could have triggered the unexpected and sudden U-turns from China to punish South Korea – again?

When Moon Jae-in kicked off his 4-day state visit in Beijing on December 13th together with 300 executives, his first visit to China since he took office, he called for a “new start”in the bilateral relations. But the Chinese doesn’t recognise that specific wording. By calling for a “new start”, Mr. Moon was trying to take an easy way, telling the Chinese to forget the elephant in the room. 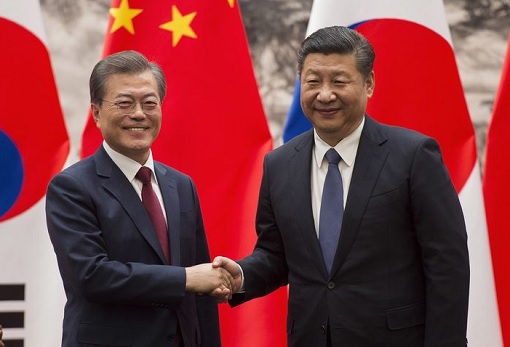 However, China claimed that Seoul had agreed not to deploy any more THAAD batteries, not to join the U.S. missile defence system in Asia, and not to engage in trilateral military cooperation with the United States and Japan. This “consensus” has become China’s pre-condition to be willing to resume talks with South Korea.

But it seems that South Korea did not fully acknowledge the “consensus” claimed by Beijing. Seoul deliberately makes the issue ambiguous, calling it a “consultation” rather than a “consensus.” Interestingly, a day before the Chinese U-turns, Moon said that he was open to delaying U.S.-South Korea joint military exercises, but that the decision was dependent on North Korea’s actions.

While “tai-chi” is originated from China, Mr. Moon has taken the game to a new level, and Beijing isn’t impressed with the South Korean president. In fact, China was already mad and furious with Moon’s attitude on the issue of the deployment of the Terminal High Altitude Area Defense (THAAD) missile defense system in South Korea during his visit to China. 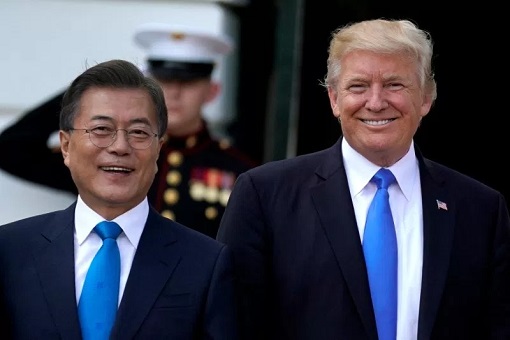 That explains why the Chinese foreign ministry kept urging South Korea to properly solve the THAAD issue even “after Moon’s visit” to China. It appears that Mr. Moon is either a weak or a cunning leader – afraid to say no to U.S. on the THAAD deployment but at the same time makes vague commitment to China. Either way, Beijing isn’t interested to play the game hence the reinstatement of the ban.

Taking advantage of the 2018 Winter Olympics, to be held from 9th to 25th February 2018, in Pyeongchang, east of Seoul, China has again unleashed its powerful weapon – trade war. In March this year, the Middle Kingdom openly targeted more than 80 supermarkets belonging to Lotte, ranging from fines for illegal advertising to suspension of sales of Lotte products to cyber attack of its website.

Korean K-pop and K-drama were also included in the nationwide boycott when their celebrities were banned from appearing on Chinese broadcasts. No Korean entertainers had managed to enter China since October 2016, until President Moon brought top South Korean actress Song Hye-kyo and boy band EXO to Beijing for a state dinner with President Xi last week.

By August this year, Seoul saw its car sales plunged by more than 50% while tourist visits were down by nearly 70%. In the 6 months to end of June, Hyundai’s sales in China dropped 42% while the anti-Korea sentiment erased 54% of Kia’s sales. Operating profit of South Korea’s largest cosmetic company, AmorePacific, tumbled 58%.

Before the ban episode, Chinese tourists accounted for about half the revenue of South Korean hotel chains, cosmetics companies, and duty-free shops. Bank of Korea forecast the ban will result in about US$4.5 billion in lost revenue for the tourism industry this year. More than 8 million Chinese visited South Korea last year but this year’s number is expected to be about half that figure.

Official data shows that based on 2016’s spending habit of Chinese visitors, even a halving of inbound Chinese tourists in the first 9 months of the year would cost the South Korea economy US$6.5 billion in lost revenue. Popular tourist destination – Jeju Island – has since been hit by quiet shopping streets, empty restaurants and deserted duty-free stores.

With the latest action from Beijing, travel agents would not be able to send tour groups to South Korea from January next year as visa application will definitely be rejected. When the news flashes, share prices of AmorePacific, Cosmax, Korean Airline, Hotel Shilla and Lotte Group, among others, took a hit and fell.

Besides the differences and disagreements on the THAAD issue, another unpleasant incident also took place during Moon’s visit. Two Korean journalists were severely beaten by more than a dozen Chinese guards while attempting to cover one of Moon’s events in Beijing. Seoul has reportedly demanded a formal apology from Beijing. [It later turned out the unprofessional Chinese security guards were hires of the South Korean tourism board.]