In a place where millions still live on the edge of malnourishment how many lives is that? (This is the real, and not "annualized figure as in the US case.)

India’s economy posted the biggest contraction among major economies last quarter, with a recent surge in coronavirus infections weighing on the outlook for any recovery.

Gross domestic product shrank 23.9 per cent in the three months to June from a year earlier, the Statistics Ministry said in a report Monday.

That’s the sharpest decline since the nation started publishing quarterly figures in 1996, and was worse than any of the world’s biggest economies tracked by Bloomberg. The median estimate in a survey of economists was for an 18 per cent contraction.

Once the world’s fastest-growing major economy, India is now on track for its first full-year contraction in more than four decades. While there are early signs that activity began picking up this quarter as lockdown restrictions were eased, the recovery is uncertain as India is quickly becoming the global epicenter for virus infections.

India reported more than 78,000 new infections on Sunday, the most by any country, with total cases nearing 4 million in a nation of 1.3 billion. [Yet hardly anyone dies.] That could delay the consumption-driven economy from fully reopening.

“While the start of the July-September quarter has likely benefited from a post-lockdown boost, those gains are already at risk of being lost amid the ongoing pandemic and New Delhi’s hesitance to open the fiscal taps,” said Priyanka Kishore, head of India and Southeast Asia economics at Oxford Economics Ltd. in Singapore.

The yield on India’s 10-year government bonds fell three basis points to 6.12 per cent ahead of the data, with the securities capping their worst monthly decline in more than two years. The rupee weakened 0.3 per cent to 73.62 per US dollar.

Details of the GDP report:

A mix of monetary and fiscal measures so far to prop up the economy won’t prevent it from sliding into recession. The government has provided only limited fiscal support given constraints on revenue growth, while the central bank has cut interest rates by 115 basis points so far this year, boosted liquidity and transferred billions of rupees in dividends to the state.

A separate report on Monday showed the government already breached its full-year budget deficit target in the first four months of the fiscal year that began April 1 as revenue receipts collapsed.

The result is likely to jolt the government’s fiscal conservationist mindset, which has announced expenditure cuts and argued that available fiscal space should be utilized only once the virus is brought under control. With new cases still surging, we believe the longer the government delays an increase in fiscal spending, the deeper the scars will be.

Krishnamurthy Subramanian, the government’s chief economic adviser, said the quarterly slump was largely expected and due to an “exogenous shock that has been felt globally.” The economy is “experiencing a V-shaped recovery” after the lockdown eased, he said in comments distributed to reporters, adding “we should expect better performance in subsequent quarters.”

The statistics office said it relied on alternative indicators such as indirect tax collections and interactions with professional bodies in the absence of field surveys during the lockdown last quarter. The data will likely undergo revisions as more information becomes available going forward, it said in a statement.

​Even before the pandemic struck, Asia’s third-largest economy was in the midst of a slowdown as a crisis in the shadow bank sector hurt new loans and took a toll on consumption, which accounts for some 60 per cent of India’s GDP. The lockdown from mid-March to contain the pandemic brought activity to a virtual halt as businesses shut down and millions of workers fled the cities for their rural homes.

The pandemic has caused historic GDP contractions in economies around the world. In India, the situation is made worse by an acceleration in virus cases, more recently in rural areas where the bulk of the population live. 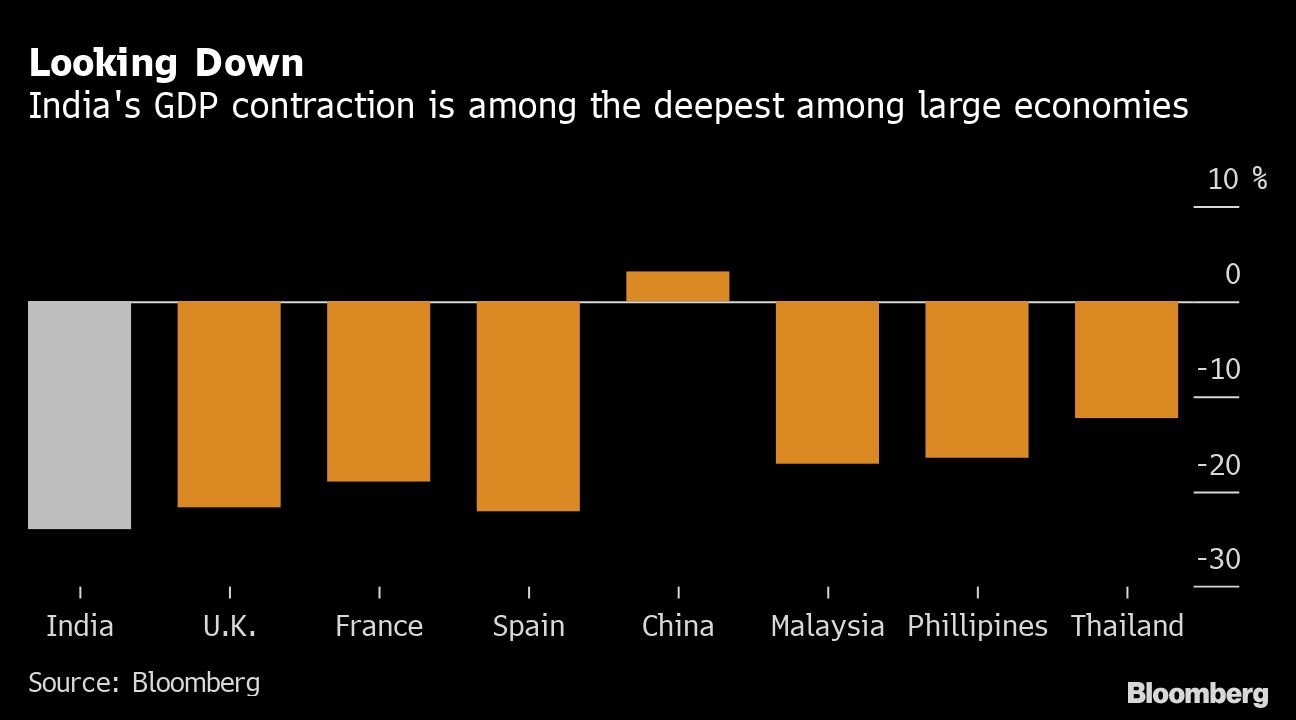 The gloomy outlook puts pressure on authorities to deliver more stimulus, but there’s limited room to act. The government is facing a budget deficit of more than 7 per cent of GDP this fiscal year, more than double its original target, while inflation is above the central bank’s 2-6 per cent goal, reducing the chances of more rate cuts.

Even so, Reserve Bank of India Governor Shaktikanta Das told the Financial Times that the government is set to announce more growth-supporting measures and inflation will likely ease.

Some economists expect growth to rebound to above 7 per cent next year, mostly led by pent-up domestic demand, and a pickup in farming and exports. [7 percent after losing 24 is nothing.] Yet, that’s likely to fall short of the recovery that followed the global financial crisis more than a decade ago, when growth averaged 8.2 per cent in the two fiscal years after the crisis, boosted by massive fiscal spending, monetary easing and a swift global rebound.

“Growth recovery will also be hinged to the curb of the Covid spread and removal of even localized lockdowns,” said Suvodeep Rakshit, senior economist at Kotak Institutional Equities in Mumbai. “The choice for the government will be on whether the consumption or the investment side needs to be pushed.”

I am optimistic about India; despite difficulties conditions in India have improved during Modi; hopefully as covid hysteria recedes recovery will occur

The Imperial Capital Is Now…
8 May 21 by Richard Seeto
Yeah, by its own citizens becoz of the lack of ...
Who or What Is Empire?