Tweets Are Not Enough, It’s Time to End Some Wars Already

In typical Trumpian fashion, the president threw out some red meat to the antiwar crowd during one of his Twitter storms last week and declared all US troops will be home from Afghanistan by Christmas.

Since then, the military has remained relatively mum on the actual plan, and Americans have been bombarded by a deluge of stories quoting anonymous officials and think-tankers insisting a “hasty” withdrawal from a 19-year-old conflict would be disastrous.

The most direct statement from a military official so far has been from Chairman of the Joint Chiefs of Staff Gen. Mark Milley, who avoided either endorsing or rejecting the president’s unexpected plan. In an interview with NPR, Milley said a US withdrawal from Afghanistan is “conditions-based” and refused to disclose any future numbers. The general also said future drawdowns in Afghanistan “will be determined by the president.”

Fox News host Tucker Carlson mischaracterized Milley’s comments in a recent segment. Carlson said Milley “broke with the White House’s plan to lower troop levels in Afghanistan to 2,500,” referring to comments from National Security Advisor Robert O’Brien, who said the administration plans to bring troop numbers down to 2,500 by early 2021.

While there have been plenty of cases of military officials rebuking President Trump’s unfulfilled promises to end wars, Milley’s comments were not that. As Carlson’s guest, the great leftist comedian Jimmy Dore, pointed out, Donald Trump is the Commander in Chief. A random late-night tweet calling for an end to the war from someone who campaigned on ending “endless war” in 2016 is not enough, especially while some of his surrogates are trying to sell Trump as the antiwar candidate.

To be fair, the Trump administration has taken steps to disengage from Afghanistan. The peace deal signed with the Taliban in February calls for a complete withdrawal of US forces by Spring 2021. All indications show US drawdowns are actually ahead of schedule, and the numbers should be down to around 4,000 by November 3rd. But what came before all this?

President Trump almost immediately rolled over in 2017 and gave then-Secretary of Defense Jim Mattis a small surge of troops in Afghanistan, bringing numbers up to around 14,000. This was small potatoes compared to 2010, when President Obama’s surge put the number over 100,000. But troop numbers aren’t everything.

Rep. Thomas Massie (R-KY) recently thanked the president on Twitter for “winding down” the war in Afghanistan, citing a lower number of US troops killed in the conflict. But dropping almost 15,000 bombs in two years is not winding down a war.

Another non-interventionist GOP Congressmen from Kentucky, who also celebrates Trump’s foreign policy, tends to disregard these escalations. Senator Rand Paul delivered what was probably the most antiwar speech ever given at a Republican National Convention back in August. “If you hate war like I hate war, if you want us to quit sending $50 billion to Afghanistan for luxury hotels and natural gas stations … you need to support President Trump for another term,” Paul said.

Throughout Trump’s presidency, Paul has praised the president for ending wars that…haven’t ended. Paul ignores the reality of the president’s foreign policy. This was put on stark display back in September 2019, when the senator applauded Trump for his “restraint” just one day after the news broke that a US airstrike killed 30 Afghan pine nut farmers.

The farmers even notified the US-backed government about the planned harvest weeks before, but they were taken out by a US drone anyway. Thirty innocent lives snuffed out by sheer incompetence but not even worth a mention from a senator who says he hates war.

“President Trump is the first president in a generation to seek to end war rather than start one,” Paul said at the RNC. Although he has a history of campaigning against it, recently Paul has remained relatively quiet on a war President Trump chose to continue – the war in Yemen.

President Trump used his veto powers to continue the war in April 2019 after Congress passed a war powers resolution calling for an end to US military involvement in Yemen. The president did this again in July 2019 when he vetoed three separate resolutions that would have prohibited arms sales to Saudi Arabia and disarmed the US-backed coalition that has been raining hell on Yemeni civilians since March 2015.

The UN estimated that if the war in Yemen ended in 2019, it would account for more than 230,000 deaths due to direct violence and the conditions on the ground caused by the barbaric US-Saudi siege on the country. Now, well into 2020, the death toll is likely much higher. The coalition continues to indiscriminately bomb the country – obliterating homes in residential areas throughout the year, killing dozens of civilians, including children.

While the war in Yemen was started under the Obama administration, this genocidal siege is more Trump’s war than the others he inherited since he chose to continue it. And why does he continue it? To stuff the pockets of Boeing, Lockheed Martin, and Raytheon. While Trump occasionally speaks some truth about the generals and the Military-Industrial Complex, he’s guilty of the same thing.

Bloomberg recently reported that President Trump is looking to withdraw hundreds of troops from Somalia. The African country is another place where the administration dropped a record number of bombs, again by loosening the rules of engagement. In 2019, the US conducted 63 airstrikes in Somalia, the most in a single year. Nick Turse, one of the few reporters that follows this conflict, found that in the first seven months of 2020, “the Trump administration conducted more airstrikes in Somalia than were carried out during the administrations of George W. Bush and Barack Obama, combined.”

According to the Bloomberg report, there are currently 700 US troops in Somalia, and most or all of them were sent over by the Trump administration. If the president successfully withdraws some troops from the country, it would undoubtedly be a good thing, but would it wind down the conflict? US troops are not doing the fighting and dying in Somalia. It’s a war being waged by drones.

When US Africa Command reports drone strikes, they usually say the bombs only killed militants from al-Shabab. But since the shadow war is so underreported, and people living under al-Shabab rarely have cell phones, it’s hard to know the real impact the war has on the civilian population. Whenever journalists or human rights groups do make it to the site of a US airstrike, they find a much different story than what AFRICOM claims. Occasionally, AFRICOM admits to a few civilian deaths, but there is never real accountability.

Trump supporters like to say he hasn’t started any new wars. But the president brought the country to the brink of one with Iran back in January, when he assassinated Iranian Gen. Qasem Soleimani. Trump has also started devastating economic wars against the people of Venezuela and Iran and increased crippling sanctions on Syria – a country rebuilding from a brutal nine-year war. And still, after almost four years in office, Trump hasn’t ended a single war he inherited and has only escalated them, not to mention his reckless provocations towards Russia and China.

Unfortunately for the American people and the citizens of the world living under the boot of the US empire, the Democratic option for November isn’t any better. Sure, Joe Biden might be better on Iran and the war in Yemen. But the former vice president said in a recent interview that he does not plan to withdraw from Afghanistan, Iraq, or Syria. Biden also said the military budget could increase under his administration. And the two candidates seem willing to out hawk each other on China and Russia.

The one guarantee for November is that if either Trump or Biden wins, a rabid interventionist will be sitting in the White House. While there’s a case to be made that Trump might be marginally less bad than Biden on issues of war, his attempts to curry the favor of Americans that are sick and tired of these endless conflicts need to be called out for what they are. Talk is not enough. It’s time to end these damn wars.

You are apparently under the impression that Trump is Emperor. You also appear to be unaware of recent history of the military doing the opposite of what any President or Secretary of State tells them to do.

Sure they are! Who is going to SECURE all those Afghan resources?!

Ending these wars would be nice but I’d suggest people better prioritize the global Marxist / Fascist / Socialist takeover. Their new weapons, Medical Tyranny and Covid 19 are by far more of a threat to mankind then any of these little wars. The World Vaccine Congress just ended. They brainstormed ways to get people to comply with forced Covid vaccinations. The World Economic Forum, a socialist group have a “Great Reset” planned for the world that could starve billions.

What appears to be happening is Marxists / Fascists / Eco Whacks from all over have allied for the purpose of world domination. How they intend to divvy it all up I have no clue.

Let me tell you though,,, We have little time to save our sorry butts as they are going balls to the wall implementing this takeover which tells me they are frightened it could all go bad for them if they don’t get it done and done fast.

Donald Trump is the Comedian in Chief.Dont steal it, its MINE!

He isn’t enough of a potty mouth to be such.

I voted for Trump because he said he’d get us out of unnecessary wars and would jail Hillary.
I didn’t vote for him again because he did neither.
I voted for Jo, not Joe.

Good luck with Jo. The Libertarians are no better than the rest,,, all of them simply are after power and your wealth.

I guess you’ve known thousands more than I have.

VOTING for the Violet Party 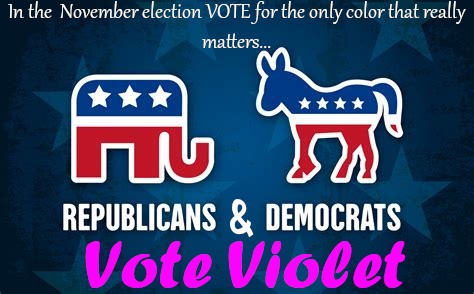 CAN ONLY GETS US MORE OF THE SAME… misery.

Take the current UK NHS: why they collect money from ...
8

Ukraine Is Becoming ‘Anti-Russia’, Putin…
16 May 21 by jm74
Putin is only stating what has been obvious ever since ...

Ukraine Is Becoming ‘Anti-Russia’, Putin…
16 May 21 by Ronnie
Putin whispers ….“Let the buildings fall,” as the man at ...
Who or What Is Empire?